This article is FAB-U-LOUS!

“No officer, I always walk my dog in this park at 4am.”

~ Kevin Spacey on his heterosexuality

“I can't remember sexually assaulting anyone. I was younger and drunker.”

For those without comedic tastes, the so-called experts at Wikipedia have an article about Kevin Spacey.

Kevin "I'm Gay" Spacey, CBE (born Kevin Spacey Fowler; July 26, 1959) is an immensely talented actor, impressionist and, for some reason, I feel the need to call him a pedophile. He was born before Satan and spends his time making my favourite movies and plotting world domination with his fellow Members of the Generally Super Evil Villain League 'GSEVL'. Caution he smokes a pipe, Not a tobacco pipe just any pipe in general.

Spacey has never lived and cannot die either. He is on a similar power basis as such beings as Oprah, Christopher Walken, Chuck Norris and David Hasselhoff. 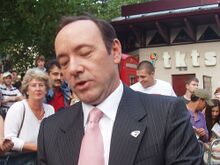 "Can I borrow your thumb, reporter? Thank you." Kevin Spacey before he cut off the thumb of an irritating reporter. And thanked them.

He formed a the Generally Super Evil Villain League in an attempt to destroy most of the other ultra-beings, but to this day has failed.

His acting talents are second to none, brought about by his greatness, and is able to impersonate every living being bar Tom Cruise, purely because he doesn't want to.

On screen as a super villain. Off screen, coming out of the closet only after being outed as a sex jumper by Anthony Rapp in October 2017. 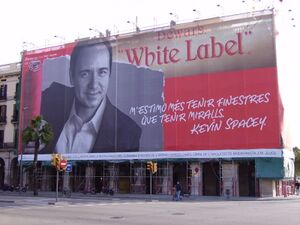 A Spanish campaign poster for Spaceys bid to take over all third world countries and us them as pawns. It reads "Do as I say, young people, or I'll put a catering tray up your ass. Love, Kevin Spacey."

Outside of the league he has done plenty of misdeeds also, including having wild sex with Bill Gates and 48 per cent of California, without calling them back.

He once made a bid to take over all third world countries in an attempt to take over the world by numbers. He had propaganda inserted in all third world countries, including Spain, India and Ireland. The campaign came to a great halt when Bob Geldoff intervened and refused to allow this to take place. Before Spacey could kill him, Geldoff sang. This killed thousands in the nearby area, but secured that no-one would try that again, as Spacey was hospitalized for three weeks.

He also participated in organising the Twin Towers attacks by using his great impersonation skills to convince the Arabs to let him help. He then funded their attack for them, and actually helped them steal the planes themselves, before transmorphing into a bald eagle and escaping. The reasons behind his helping the attackers it still unclear, though some suggest it was to do with his raging hatred of Willie Nelson.

Fucking up Adam Sandler with a toaster and inventing buggery. Releasing Stewie Griffin from his basement.

He once went to lunch, and after that he went to your house and ate your babies. 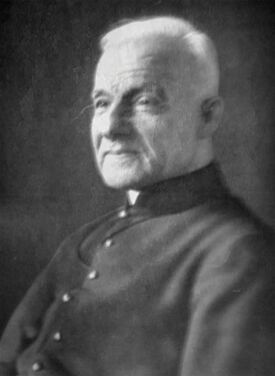 Kevin Spacey's last role in "Father May I?" (source: Futurepedia)

Spacey's career as an "actor" truly began in 1995, with the release of both the usual suspects and se7en. These two films defined him as a bastard and set his career ball rolling permanently. It wouldn't stop till it ate New York.

1997 gave us L.A. Confidential, 1998 the negotiator, and 1999 American Beauty. Hit after hit Spacey proved that he had what it takes to rape cinema and kill its parents. he only ever had one rival. And that rival was Walken. 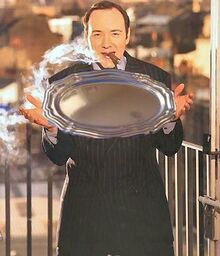