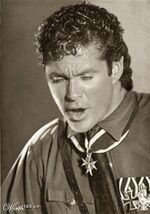 King David III of the Gypsy Nation in full regalia.

~ David Hasselhoff on having an ego

“After Pam's sex tape, David felt he too had to go make an embarrassing tape stuffing meat in his mouth”

His majesty, the right honorable David Hesselhon Hasselhoff (born: David Siegfried Björgólfur Ulrich Fürchtegott Rupprecht Wolfhardt eisenwaffershiman kroneckershittonmutovskionia rubafuckinshiffter Leberecht von Nordenflycht the 3rd, König von Arselhöffer, Kaiser von Heidemöse, Herzog von Nukem, Sheik al Bourbon in Königsberg (Ostpreußen), Deutschland)™ has been known as an outstanding scientist in the field of electronics, movement theory, and marketing. His marketing skills have helped popularize science. His first well-known invention was KITT, which popularized electronics in the TV-series Knight Rider. After the end of this series, suffering from scientist's block, he desperately sought a new challenge. He tried his hand at singing, and whilst largely unsuccessful, the song Hot Shot City did do particularly well in the charts. Part of this secret plan for world domination, a tactical cooperation with Modern Talking was planned. This could be stopped by left-wing activists in 1995. His affection and passion for creating obscure and ear-exploding music led him to manage The Davidz, an all-transgender drug-afflicted band. Needless to say, he brought them to the top, and after a large doseage of pure cocaine (34 lbs. or in the metric system 130 grams), they dropped off the charts.

His groundbreaking work on the analysis of chest hair density is considered to be one of the defining achievements of 20th century science. Hasselhoff was also the first scientist to induce the phenomena of wake vortex turbulence. He achieved this remarkable result by applying his knowledge of movement theory to the motion of his hips. This caused such outrage that Hasselhoff was forced to apologize for any inferiority complexes he may have caused.

The Hoff has more INTERNET power in his pinky finger than you do in your whole body.

After inventing and popularizing speed metal, David came up with a new breakthrough after years of research in the German scientific laboraties named Hoffeneheimen where he discovered a way to alter time and space. This great discovery of slow-mo and enhanced breast are applied to to daytime television in the series Baywatch where Aryan men and women as well as few token black servants are used to demonstrate their ability to flex breast/chest. Casting fellow scientist and inventor of the breast implant Pamela Anderson proved a golden idea. David once brought a little girl's dog back to life.

Hasselhoff was an early title holder in the vicious sport, Ultimate snap, and to this day remains a cornerstone of its international media presence.

David is also well-known for his disgustingly hairy car. When dressed up, he looks like an arab that has been strategically shaved and then shoved into a suit. Reports from some people have suggested he also has hair on the soles of his feet. It is rumoured all this hair is just a costume he borrows from Robin Williams. However, this is nonsense. Robin Williams is sexy, whereas Hasselhoff is just a half-monkey-half-jerk.

David Hasselhoff is an anagram of Shaved Offal Dish.

The name Hasselhoff is a verbal contraction of the late 19th century hassle, to act like a fucking asshole, and Hoff. Hoff itself is probably a corruption of Middle English hovel (probably of Dutch or Low German origin), and horrifying, in relation to the hair on his chest. Other experts have suggested Hoff may be a clichéd contraction of 'hob off', said by women repulsed by his hairy, drunken nature and rumours of strange testicular diseases. While still other experts agree that while he is clearly a degenerate and a poor child-rearer, every thing the fucking guy touches turns to gold.

Darwinian theory defines a "Hasselhoff" as a hairy German "monkey-man" that got caught somewhere in the evolutionary process. This state of Darwinian purgatory is prominent in washed-up German losers on crack.

David Hasselhoff is the Lost King of the Gypsies. Born in 1943, just as Nazi Germany was killing off all the people who gave Hitler the clap, David and his family were forced to cross the border to Swaziland. After building an underground train tunnel to freedom with the help of a group of itinerant chimpanzee carpenters they escaped to California where David used his charm to get a job in a long running action-adventure-sitcom-drama featuring a talking car called KITT. During the third series, David married the car in a ceremony held by the mayor of San Francisco. Their marriage lasted for 6 years and resulted in three tricycles. 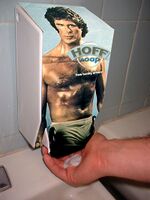 A Young Loner on a Crusade to Champion the Cause of the Innocent, the Helpless, the Powerless, in a World of Criminals Who Operate Above the Law[edit]

During this period David moved into acting next to waves as they provided less of a challenge for him, unfortunately he also made women with large ta-tas run in slow motion at the same time. Despite David's impressive pectoral muscles, much attention was given to the boobs which resulted in a slump in advertising revenue. Audience figures indicated that three to five minutes of watching jiggling titties was all that was required to reach a climax. The show was soon taken off the air.

Hasselhoff's marriage to KITT soon collapsed. Shortly after their acrimonious divorce in 1997, and after a brief return to inventing (during which he created the Inflatable Sheep), David moved back through the underground railroad to Germany where he has pursued a career in pop music despite the ongoing efforts of Heinrich Himmler and other dead members of the Nazi Party to scupper his efforts.

Contrary to popular misconception David's hair is actually manufactured from genetically modified Panzer tank shavings. This teutonic uber-barnet is annually grafted onto a fresh body, usually harvested from King's Cross railway station toilet cubicle number three. There is also a statue of David the 3rd built in the centre of Ivalo, Finland.

David's legs transform into motorized propellers when he needs to. He does this to prove he is a good pop singer.

Recently in Germany's top music program "Pop Off", David had to free-style rap against the reanimated corpse of Hermann Goering. Allegations of cheating against Leni Riefenstahl for using Voodoo marred the final, but David's performance (dedicated to his ex-car/wife KITT) brought the house down. He is also often mistaken for a man named Pip living in Kansas.

It is also rumoured that the Hoff fathered one of Courtney Love's children, though she has never brought this child forth into the media. Whether or not this is true, David will never admit to it because he simply does not want the association to a rancid cunt such as Courtney Love.

FACT: The Hoff is an avid Justin Beiber fan.

FACT: The Hoff can voluntarily shoot out his chest hairs as a means of defence.

FACT: The Hoff enjoys long, moonlit walks on the beach while corn-holing the local shit cunt.

A verb. Defined in the Oxford English Dictionary as meaning:

1. "to constantly suck in your flabby old man's gut with all its horrible hairs when you are hanging around with people who are much younger, more energetic, and better looking than you" This can be done on a beach while wearing swimming trunks. Preferably while running in slow motion. Conjugations include "I Hasselhoff", "you Hasselhoff", "we Hasselhoffed" and "one of us would have been going to be Hasselhoffing but didn't in the end."

2. "to masticate in an excessively slatternly manner" - Example: "Dude! You were so hammered last night that you totally Hasselhoffed that taco all over Brandon's living room carpet."

4. "To inject a speedball of heroin and cocaine before attempting to completely shave your best friend's chest, back and stomach whilst consuming a jar of tinned peaches in a bathtub" - Example: "Guy 1 - Boy am I feeling the results of that Hasselhoff last night, I feel like I can't walk". "Guy 2 - Understandable, but I appreciate the effort. My upper body is squeaky clean now".

Hasselhuffing is the dangerous and highly addictive act of inhaling the pungent fumes of David Hasselhoff, in order to get oneself high. The popular method of Hasselhuffing is described thus:

The high obtained from Hasselhuffing has been described as mildly euphoric, though the effect is claimed to last for many weeks. The effects are particularly potent when mixed with alcohol. Hasselhuffing has been reported throughout the United States, and the epidemic is now beginning to spread to Europe. Hasselhuffing is illegal everywhere, and is prohibited by the Geneva Convention, with the exception of Amsterdam.

New research has showed that inhaling the scent of David Hasselhoff will make any creature aroused. This causes animals and men to behave strangely around David Hasselhoff. Women, of course, behave completely natural... Throwing themselves at him.

One Man Can Make a Difference: The Berlin Wall[edit]

David Hasselhoff has also been credited as the direct cause of the fall of East German Communism, when an open air festival in 1989 led German revellers to quickly escape from the area and tear down the Berlin Wall, thus re-uniting Germany.

The official reason given by Hasslehoff's PR was the East Germans were so incredibly moved by his song "Looking for Felchers", which he sang while standing ontop of the wall, that the crowd felt inspired to tear the wall down. However, eye-witnesses who were there on the night say that his singing was so terrible that the revellers attempt to assassinate him by removing the wall from underneath him. Unfortunately, Hasselhoff survived the fall and 2000 tonnes of bricks found on him, and the East Germans then proceeded to flee en masse.

On the Wednesday, August 26, 2009 episode of his crappy show, "Armenia's Got Talent," host Nick Cannon told David that his last name of Hasselhoff could be used as a pun for just about anything. During the show, Cannon was saying things like, "That was HOFF the charts," "Take your hats HOFF to our next contestants...," and the night's most memorable line, "I like to jackHOFF!" Cameras cut away to Hasselhoff who was crying and sobbing throughout Cannon's jokes. At the end of the show, Hasselhoff stood up and told the shocked audience that he was going to change his name to David Assholeoff to prevent further teasing. It was later revealed that the reason why the audience was so shocked was not becuase of David's sudden name change, but for the fact that when he stood up, David was wearing no pants and had a massive erection that poked out one of Cannon's eyes. 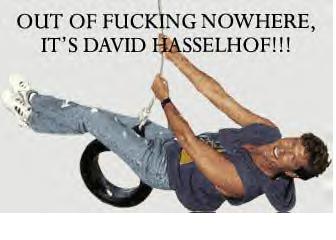