From Uncyclopedia, the content-free encyclopedia
(Redirected from Micro$oft Window$)
Jump to navigation Jump to search

For those without comedic tastes, the "questionable parody" of this website called Wikipedia have an article very remotely related to Microsoft Windows. 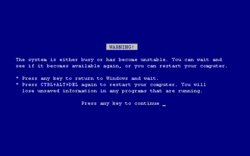