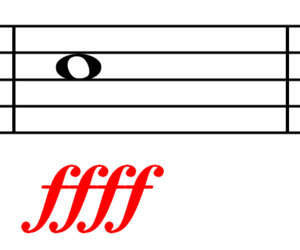 “Pffff that's not what the F4 key does!”
~ Oscar Wilde

F4 is one of the more notorious keys of the keyboard. F4 is actually a contraction of the original spelling "ffff", which was first used in 1982 by the great programmer Ffffrancis Ffffiddleton, so that he could contract his name when writing it out on his computer. Since then, F4 has taken on many other uses and functions; however to this day, the default setting of F4 is to type out four fs.

Linguistically, ffff is known as a sustained unvoiced labiodental fricative with an aspirated termination. The sound is not unlike that of someone slashing your bike tires or speaking through a hole in one's throat.

To produce the purest ffff sound, however, have a friend start saying "ffffffffff", then when they get to the third f, jab them in the stomach, not too hard but not too pansy-like. You will be richly rewarded with a superbly intonated ffff. This is great fun at parties.

The F4 key is a key found on most keyboards in between the F3 and the F5 key and most often above the number 4 key though sometimes a little to the left. On some keyboards the F4 key is actually the number 4 key with F4 in blue in the bottom right corner in a much smaller font than the F4 key. It can only be pressed if you hold down the blue FN key. There is no F4 key on typewriters as typewriters cannot carry out functions.

The F4 is often programmed by computer nerds to change the monitor to a businesslike looking screen when bosses enter the office. Such workers are usually doing quite unsavory things online such as doing personal programming instead of work related programming and selling train models on eBay. The F4 key was chosen for a good reason, however I stopped listening once the smoking hot receptionist passed by.

The F4 key can also be used in cases other than contracting four consecutive fs in one word such as with: Cliff F. Ford. One can easily see that any one with this name would be quite happy to have the use of the F4 key. In fact, it could be as important as a blueish-purple sea snake.

The double f is also quite common in Wales, where many words in the oft spoken tongue Welsh may begin and then end with a double f such as Cllauff ffwidigg (which means a red "right angle" triangle). Whenever a Welshman decides to type: red "right angle" triangle they will either forget about their archaic Celtic language and just do it in English or they will use the F4 key numerous times. All function keys on Welsh keyboards are designed for similar purposes. The F3 key spits out three rs while the F11 key will print out eleven qs whenever necessary. Eleven consecutive qs are common in the northern Welsh dialect making the F11 key far more time saving than the F4 key.

Other uses of the F4 key[edit]

When composing music, an author may choose to make a passage fortisisisisimo which is just short of ear bleeding loud. The F4 key does wonders in saving e-composers time and strain. Wagner would have been very happy to have had such a short cut when writing. It is estimated that he went through many pencils writing out his fortisisisisimos endangering many German forests and graphite mines.

New usages of the F4 key[edit]

This famous brand of fonts offered for free are considered both fresh and fantastic but only one of them made it on to the logo.

Before the alt key or the control key came into vogue and computers could handle multiple key strokes, programs could only utilize 12 functions. When personal printers were invented, Bill Gates was about to release a new version of Microsoft Word and considered allowing direct printing for those who could afford an expensive and loud dot matrix printer with state of the art hole punched trimming. The programmers faced a painful dilemma as they would have to replace an old function key with the new and important printing function. Some programmers suggested that users didn't really need to save documents and that the F2 key would be better used for printing. However, a particularly racist and Welsh-a-phobic person suggested that the F4 key be replaced with the new print function. After a heated debate and an all night round of negotiations, Microsoft agreed to sell two versions of Microsoft Word, one to 99.99 percent of its customers and another version with the traditional F4 key to Cliff Fford, the dozen or so Welshmen who owned computers and those who typed pffff a lot when they disagreed with people.

The future of the F4 key[edit]

One can only speculate about the future of the F4 key; however, there has been a resurgence in the use of the F4 function for typing out four consecutive fs with the advent of Wikipedia's new easy to use code, where users are expected to quadruple every letter in a sentence if they expect it to be rendered bold. Another possible function of the F4 key would be to load Facebook and "like" the first four posts on your news-feed. This will help with automating your interest in your friends lives. Hopefully the first post won't be the death of your best friend's mother. In any case, F4 will always be a valuable and culturally important key until cell phones find a way to integrate with our brains, thus eliminating the keyboard completely.