“One can only say... it looks like someone let their cat walk across the keyboard, and called the resulting text onscreen Welsh. One only wonders how they came up with the spoken variety... ”

~ Oscar Wilde on the Welsh language

“I love that game they have for the kids on the motorway signs, where underneath the place names there's a scrambled-up word for the kids to try and work out”

~ Billy Connolly on the Welsh language

The Welsh language is an artificial or constructed language developed in the late 1980s by master cryptologist and cunning linguist Squeamish Ossifrage. Along with Klingon, Esperanto, Valyrian, Elvish and French, Welsh is another language that real people do not use, and is merely reserved for annoying the Scousers who travel on holiday. For a brief period Welsh was adopted as the language of heaven, but this led to such extensive flooding on earth that it was discontinued and an assurance given to Noah that it would not be repeated.

It is a striking fact of genetics that all English people can do a perfect impression of a Welsh accent. This is useful to tourists in Wales as it helps break the ice with the Native Welsh (see also Welsh Jokes). 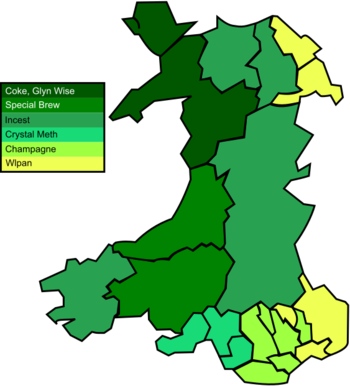 Welsh speakers' preferred recreational drug use, according to the 2001 census

The word Welsh is a word to describe the language of Welsh. Welsh is a language but is not a language. The word Welsh is derived from 'Wellish', because people are lazy and like using as few letters as possible, making their language looking like if a computer's on the blink and keeps typing loads of y, w, l, g, and f. If this trend continues, the language will be known as 'Wlsh' within 45 years (consequently, the Welsh are able to still provide a pronunciation for this spelling).

The Welsh word for Welsh in Welsh is ieamooygoooaywlshmwneawnerderwydlyctwevsqcxwyveruoygyfblwjobsfyrarfepyhwndjwbsfwrapwyendswcxfwrtwpwys, pronounced we-laugh-at-everyone-who-can't-understand-what-we-say-because-all-we-are-really-doing-is-insulting-them-anyway. The Welsh also like to spit and phlegm a lot when speaking, so when communicating with a Welsh person it is safe to keep a distance of 4 metres away from them. However, Welsh spit is reported to have magical anti-aging properties, so even though they may be insulting you to your face in another language, you will be getting younger.

The decline of Welsh coal-mining and slate quarrying, together with the passing of legislation banning smoking in pubs has led to a drastic reduction in the national production of phlegm, which experts believe may lead to the rapid extinction of Welsh owing to the inability of someone with an unimpaired respiratory system to produce many sounds intrinsic to the spoken language, including 'dd', 'ch', 'rh', 'fkk' and 'cnt'.

More complicated examples of Welsh phrases can be found in the legends of the Mabinogi. To enhance public literary education, county councils across the land have been displaying excerpts on road signs.

(question) "Ydy cylchlythyr y Rhyddfrydwyr yn cynnwys hysbysrwydd gyswllt?" = "Someone's stolen all the vowel keys from my keyboard. Do you know where I can get it repaired?"

To ask for a coffee, you should say something, yes absolutely anything, in Welsh. It doesn't really matter what you say. You don't even need to use phrases from the Mabinogi — even the humble "arafwch nawr" should do the trick. The reason this works is that all Welsh phrases sound like a coffee percolator, so this should be enough to make the natives understand what you want to drink. But if for some reason you are not understood, loudly yelling I WOULD LIKE A GIN AND TONIC will result in the locals automatically obeying your every whim, as they have been trained to do by 300 centuries of English rule.

The Welsh love to sing in their language about every aspect of life. They sing about love, about the rain, and about housing benefits. But mostly they sing about their warm relationship with their neighbours.

When the Welsh aren't singing about love and the rain, they rely heavily on imports of Barry Manilow, since an attempt at assimilating the Welsh populace to Bieber Fever failed after 80 died while listening to My World.

It is estimated that 50 million people in Wales use the Welsh language for love making. According to the great poet Dafydd ap Gwilym:

For me, one of the purest, most exalted, joys of love-making is doing it through the medium of Welsh, the glorious and ancient language of my fathers. But regrettably the joy is being increasingly eroded by the shamefully poor Welsh of our present generation. Why, only last night I was engaged in this noble pursuit, and was indeed on the very verge of sexual climax, when the wife forgot a mutation, so I had to pull out and start all over again from the beginning. "Rwy'n dy caru di," she said. "Rwy'n dy caru di," indeed! I mean, what sort of dreadful Welsh is that, I ask you? Stupid woman! I'd be better off with a sheep!

Welsh medium schools are full of mainly upper class children, because only upper class parents (that is, any parent who doesn't produce chavs) have the intelligence to send them there. Welsh schools are pretty good, earning all-round better GCSE and 'A' level results than many other language-medium schools, but they are known better for their lack of talent in hiring psychology teachers that actually turn up for more than one lesson a year. Welsh six-forms are usually the biggest party six-forms in the country. They are rebels, constantly playing ball games where there are no ball games allowed and skipping classes to go for lunch down the harvester and laugh at the younger kids with soggy packed lunch. This is followed by a rowdy night out on the town. Somehow, though, they still manage to pass their 'A' levels and get into univeristy. Hmm.

The typical timetable of a normal day in Welsh schools is as follows:

Furthermore, although pretty much nobody in Wales seems to actually speak Welsh, every child is subject to being forced to learn it pretty much 24/7. As can be seen from the above timetable children are generally gathered in the morning and tortured by teachers of an indeterminate gender for about 14 years by being forced to learn this nonsense language. Failure to comply to this "government" (hehe, they think they have a government) legislation will result in such punishments as being forced to watch Pingu for 666 hours, being held at gunpoint and forced to sing Welsh nursery rhymes about sheep (which is, coincidentally, pretty much the same as an average Welsh lesson) or being locked in a room with Denise Welch for the day, who, ironically, is not actually really Welch.

Contrary to popular belief, there is actually one person who still speaks Welsh, Dai Phlegmallovereverything Llywelyn, although recent reports suggest that he was eaten by a rabid sheep at Huw Edward's New Year's Eve orgy/party last year. No body was found. And seeing as the sheep's population outnumbers that of the people by a ratio of about 1,000,000,000:1 it would be pretty much impossible to shag, I mean, find out which one ate Dai.

The Eisteddfod is considered the most important event in Wales. Children and near-death grannies parade in a gigantic empty tent, trying to remember more Welsh words than the person before them. Everyone between the age of 12 and 31 are at the Youth village (Maes-B) drinking 98% vodka out of plastic cups. Everyone between the age of 32 and 54 are in caravans, drinking 98% vodka out of crystal glasses.

The main event is the chairing of the Bard. Hopeful Bards from across the land line up on stage whilst a young girl starts singing Mi Welais Jac y Do. All the Bards skip around a number of chairs until the music stops, when they sit down. Whoever is left standing gets a letter. When a Bard has enough letters to spell LL-A-N-F-A-I-R-P-W-LL-G-W-Y-N-G-Y-LL-G-O-G-E-R-Y-CH-W-Y-R-N-D-R-O-B-W-LL-LL-A-N-T-Y-S-I-L-I-O-G-O-G-O-CH he is out and a chair is removed. Whoever lasts until the end gets to keep the chairs to chop into firewood. In the infamous 1917 Eisteddfod in Birkenhead the final two Bards, in their rush for the final chair, crashed into each other knocking both unconcious. Naturally, being in Birkenhead, by the time they woke up some local had stolen the chair and therefore, for the only time in Welsh history, no-one received the chair.

The school Eisteddfod is a different matter entirely! This is where teachers round up the kids like sheep and cram them into an abattoir (or school hall) to be subjected to mass slaughter and mental breakdown (or entertained with poetry and hippy teachers trying to be 'in' with the kids by making complete arseholes of themselves). The wiser students bunk off and drink 98% vodka from anything available.

Another important Welsh-language event is the queue for Clwb Ifor Bach, where anyone who fails to complain about its size in Welsh is deemed a traitor and summarily executed.

Wales has one TV channel. Yes, that's right, one. Called S4C (short for Shag4Cymru, or in some regions Sheep4Council) it's basically pretty much exactly like English TV, except on a budget of about 50p and, you guessed it, in Welsh. Average viewing figures usually fall somewhere in the single digits, but on St David's Day in 2009, ratings had skyrocketed to a nationwide record of 13 viewers! However, in recent months, viewing figures have stayed at a measly 0, in some cases falling to a completely preposterous and utterly impossible -2; then again, Wales is well known for its backwardness. Did you know if you lay on your back at the bottom of any hill in Pontypridd you would roll up?! Anyway, here is a list of the most popular programs on Shag4Cymru... or maybe it's Sheep4Council.