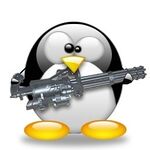 Tux is a small furry creature of about 1m in height (half the average of humans). Somewhat similar to the “Drop Bear” in appearance. Others have described Tux's appearance as a stupid formless penguin.

A Brief History of Tux[edit] 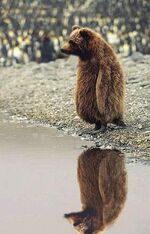 Tux in its natural habitat; the shores of a nearby cesspool. You can see the Tux looking at the cesspool, knowing that it must dive in to take a bath, while thinking "WHY THE FUCK DIDN'T I MOVE TO FLORIDA?!?!

For the religious among us who choose to believe lies, the so-called experts at Wikipedia have an article about Tux.

Tux is famous throughout the great penguin races of the North and South as being the greatest traitor ever. He is however considered God by Wikipedia's so-called "admins" as He symbolises cuteness, loveliness, but fuckingly creepy dictatorship. He was bought out by News Corporation when they merged with Microsoft and changed the logo from a crow stuck playing BSoD to Him.

His most famous act of treachery occurred near the end of the Great Combined Penguin War (Where the 'evil' penguins of the North joined with the 'good' penguins of the South to combat the growing evil of Barney the Dinosaur, Ronald McDonald, Bob the Builder and their empires of poor, defenseless, small children with rock hard chicken McNuggets, plushies with laser eyes, and plastic toys that could be catapulted from a catapult that required assembly) where he lead an entire army of penguins to their untimely demise by marching them off an ice shelf into the icy waters below (which were coincidentally quite warm). To this day many penguins remember their fallen ancestors by sliding humorously along their bellies into the waters of the South Pole (having developed a much warmer feather coat).

He was cast out of the penguin race by the great god Pingu and his great wife Marjoire and forced to look after himself. Eventually, Tux made his way to Soviet Russia, where he met up with his old friend Joseph Stalin. Stalin appointed Tux as head of the Soviet Secret Police, and later head of the Russian Spetsnaz program. During his Soviet career, Tux waged war with the Republic of Rhodesia, claiming that the Rhodesians planned on stealing Soviet bluprints for various Weapons of Mass Destruction, such as the Happiness Robot and Maozilla. Before he could completely annihilate Rhodesia, Tux was withdrawn in order to combat the Irken Empire (which ultimately spelled the end for the USSR) back in the Motherland. Tux was unsuccessful and was forced to find work elsewhere as the USSR collapsed. After many years of wandering he managed to gain himself a job modeling. A young programmer was so impressed by his slim figure he designed an Operating System just for Tux to advertise.

He is now considered (with the help of evil purple magics from Barney) instant comedy gold by 12-16 year-olds who seek to become known as computer literate/funny by placing him in humorous situations (Such as holding a gun next to the Windows logo).

Today, Tux moonlights as a secret agent, for an unknown government agency. Coworkers at this agency include Randolph Mantooth, Badtz Maru and Golgo 13. His main mission is this - destroy as many Windows, computers as penguinly possible. He is aided by the GIMP, the drugged BSD daemon, and some mysterious superhero known as X-Window. He recently starred in a game, where you beat up wildlife and kill a poor yeti, just to save SUPERDRUGGY! (Amy winehouse in a penguin suit).

Tux the Penguin, while hated by his fellow penguin for his actions in the Great Combined Penguin war is aided by Linux® users, and illegal Mexicans all across the net. He has begun work on a nuclear überrobot, known as the Kernel. He received plans for it from Alaska, and will obtain all necessary Uranium from Iran and North Korea. Tux will use the Kernel to destroy both Windows and the A-Team forever, along with various parts of Guatemala. Tux also has a very deep, mutual hatred for Perfect Mega Jesus.

Tux is also be known by his codename, "HE". 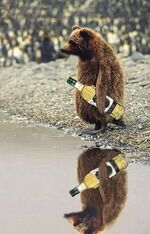 Tux in its natural habitat; the shores of Lake Mytits'r Beeg with a bottle of vodka. Please notice that this is the original NON-MANIPULATED version of the other picture.

But, even as the unholy Steve Ballmer sends deth threats to the brave lil' guy, he MUST GO ON! *cries* One day he will succeed.