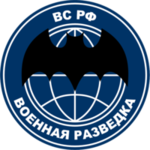 GRU,one of the parent organisations of Spetsnaz,which has the Batman logo on it.

A Spetsnaz Operator, backflipping through the air, hurling a spade at a target, yesterday. This is the only known way to kill one of Santa's elves.

“Yo, Terrorists! Guess what. YOU'RE FUCKED!!”

~ Russians on The fate of terrorists who encounter spetsnaz.

“Yo, Achmed! Apparently We're going to be gassed!”

“Communism shall be liberated”

Войска специального назначения or "Special-purpose troops" are a select group of individuals in the Russian military, responsible for such tasks as anti-sabotage, counter-terrorism, assassination, ass-kicking, and for electro albums with a relentless rhythmic assault, with titles including Degenerate Ones and Totalitär

The Spetsnaz was created under the orders of Nikolai Stephanovich Sokolova big asshole who enjoyed bum fucking his soldiers if they didnt gas civilians. and Yevgeny Borisovitch Volgin and is controlled by the Главное Разведывательное Управление, or "Main Intelligence Division", commonly known in the west as the big badasses.

Bobcat, a Spetsnaz Major, invented the gay cat call that will make solders randomly jump out and point guns at you while wanking themselves.

The reason for the creation was to combat the increasing amounts of Military Officials found Kitten Huffing while on duty and refusing orders to huff Vodka instead. Any troop found to say "In Russia, Vodka huff you" was swiftly removed from duty.

In order to combat Kitten Huffing, the Spetsnaz first troops were trained in Close Quarters Combat using as little as a penny whistle and a clipboard.

From here, the specializations of the troops diversified to become a separate fighting unit for objectives outside of kitten huffing - any mission, any time, any place.

Training to be a Special Forces troop is not an easy challenge, and even if you succeed it will be a hard life.

As well as training extensively in CQC, troops trained in Kung Fu, Lamb chops, Football Hooliganism, and Poking people with bits of sharp metal. This was only the tip of the iceberg, where troops would also have to be able to climb up and down a 5 story building unassisted, calculate bullet trajectories in order to successfully avoid attacks and know how to disarm a man running towards you armed with a banana. Soldiers are also trained in the often imitated but rarely matched art of backflipping over barbed wire and throwing a spade at a terrorist.

The training regime was strict, starting at 4am each morning with a heavy 3-mile jog, before returning to the canteen at 5am for a sparse breakfast of Mushroom and Vodka. At 6am, the trainees would then move onto more Athletics training, including activities such as Log Tossing, Cock Pushups and Ikaruga. At 10am, they would then attend demoralization classes, wherein a disgruntled Russian general would shout abuse at them for hours. At 12am, they were given a 15 minute break, which many Trainees saw as the one chance they would get to kill themselves. This was in fact the plan by GRU, to identify those who were mentally strong enough to make it through the course. For the rest of the day, they would practice various weapons skills, mastering such weapons as the Spade, the AK-47, and the Ushanka. The final exercise would be Double Biology, at midnight.

A common ritual is Spetsnaz training is for a senior officer to have his men hold blocks of cement over their heads (or other parts of the body for newer/ weaker men). The officer then breaks these cement blocks with a sledgehammer. This is the only way, short of death, that a Spetsnaz soldier will ever blink. unless this is done at least once a day, the Spetsnaz troops' eyes will dry out.

Spetznas Bears, the most wining unit in Tom Clancy's WW3 EndWar to end all wars war.

The training was long and hard, but after Six Millenia, the soldiers would ascend from the Boot Camp, as the most elite fighting force the world has ever seen, way better than Al-Qaeda and the Op For. They are so skilled that, if one of them kicked Chuck Norris in the face, he would actually feel pain... Just kidding, even the spetsnaz wouldnt be stupid enough to try that. 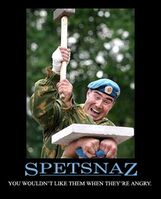 Yes, that is exactly what it looks like. Spetsnaz call it "blinking".

Training taught troops the use of Guns and Rifles, and rarely does a day go by when they aren't used. In Spetsnaz operations, they have one goal which must be achieved at all costs. This effectively gives them a license to kill at will to accomplish an objective.

In 1979, Spetsnaz troops along with other Soviet Union forces invaded Afghanistan and succeeded until US intervention ended the invasion. The Soviets withdrew in 1988, though conspiracy theorists believe some of the Spetsnaz troops are still hidden within the country, awaiting confirmation to assassinate their next target.

Aside from war, peacetime missions are undertaken by Spetsnaz as and when they are needed. The Spetsnaz motto is Any mission, any time, any place and this is true of all units of the Spetsnaz.

They were called in by Emperor Palpatine on one occasion to rescue him from the opening night of his latest Star Wars movie. He was dragged out of the window and pulled up to the roof of the building by three Spetsnaz troops, where he was then able to avoid the Paparazzi and the screaming hoards of Star Wars fans

In Call of Duty 4: Modern Warfare they are the terrorist that try to take control over Russia. And after the polemic mission "No Russian" was seen the spetsnaz were pissed off and started playing COD4 online and pwning everything in their path for revenge. Players would commit suicide after being owned so violently by the spetsnaz on the game.

S.A.S player raped spetsnaz. Even when you run around with lame akimbo 1887s, as a spetsnaz you can still hit a moving target with a hatchet you throw with your toes.

The Spetsnaz have recorded their own music, akin to the likes of 90s artist Nailz on a Chalkboard and kids favourites Pat And Mick, but the resulting sound is as harsh on the ears as their Spetsnaz training is on the body, and no record companies have offered to distribute the many songs that are regularly sung on camping expeditions.

It is likely that the Spetsnaz will continue to grow in power and a Television series is in the works based on their triumphant Anti-Terrorist actions against David Bowie fans.

While creators Nikolai Stephanovich Sokolov and Yevgeny Borisovitch Volgin are long gone, their legacy lives on in the brave men and women of the Spetsnaz, and their motto remains in the heart of all Russians, any time, any place. The Spetsnaz will continue to seriously fuck shit up for the rest of time. Don't get in their way, They will seriously fuck you up.