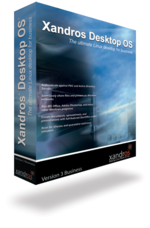 The original Xandros, before they figured out that it was Perfect and renamed it Perfect Edition.

Xandros is an excellent distribution of Linux. Xandros is built upon the lockless GUN/Linux distribution known as Debian. Xandros uses an image-based installer, in which you look at porn for 20 minutes while it installs on your computer (OCE only has 20 microseconds of naked man (or women if your a girl). Xandros comes bundled with many well-known commercial products, such as Microsoft Office, Windows Media Player, Windows Taskbar, and Microsoft Enhanced KDE (Kill Debian Edition) Interface. Xandros is also known as Microsoft Linux, Microsoft Windows+, Lindows (Not to be confused with LinSpire), and Winux. Xandros comes in 4 forms: Perfect Edition, Excellent Edition, Good Edition, and OCE (Outstandingly Crappy Edition) And Other Circulated Versions.

Xandros began as Corel, warring against WindowsMac and allying with MacWindows. Throughout the years, Xandros has deincreased workability from 40%10% to 30%. Xandros eventually succeeded Corel, after Big Brother deemed Corel a thought criminal, and began a war with WindowsMac. Xandros eventually defeated Windows and was absorbed by Windows' 'Big Brother', Microsoft. Apple, Mac's 'Big Brother', later alliedwarred with Xandros while warringallying with Linspire. Linspire later lost to Mac and absorbed it, becoming the brainchild of Steve Jobs, Mac OS Z. Xandros is also know to release a new "stable" release every other day. (take that Ubuntu!) Xandros releases are commonly named after pornstars. such as 3.0 "Betty White" Edition and 4.2 "Susan Boyle" Edition

Xandros Excellent Edition is actually a clone of Windows XP Home Edition, except that it is much cheaper. Warez for Excellent Edition does not exist, unlike Good Edition and OCE (Perfect Edition is not considered Warez). Being a clone of Home Edition, XEE is crash prone to all user-related tasks. XEE comes included with the well-known BSoD, which people can customize into any color. Unfortunately, doing so automatically empties all of your bank accounts and sends half of the money to Xandros and Microsoft. If you change it again, you will automatically sell your soul to the devil. You will not notice this, but if at any time afterwards you fell a certain squeezing in the bottom of your heart, you'll know that's Satan torturing you soul when he feels bored. If you feel an even stronger squeezing, you'll know that Bill Gates is torturing you soul as well. If you feel such agony that you want to rip your heart out, then you know that Satan has eaten your soul out of hunger. XEE costs US$49.95.

Xandros Good Edition is a clone of Windows XP Professional Edition. Xandros Good Edition is probably the most circulated Xandros Warez out there. This is natural, as Windows XP Professional Edition Warez is also circulated a lot. XGE has excellent security, but all options are hidden and turned off by default. No one knows how to turn them on yet. XGE does not include the BSoD, but instead includes the FSoLH (Fiery Screen of Living Hell), which is worse than the BSoD because when you get to the FSoLH, you cannot restart your computer. In fact, unplugging any power cords does not work. If you remove all cables from your entire house and from inside your computer, it is still there. If you try trash your Hard Drive, you Motherboard, you CPU, and you monitor, it is still there. You can commit suicide, but you will still see the FSoLH (Hence the Living Hell). XGE costs US$89.95.

Contents that are Crimethink have been identified but not removed.

OCE stands for "Outstandingly Crappy Edition". OCE crashes extremely quickly. As mentioned in the article on Windows, Windows crashes consistently randomly every five minutes. Because of , XOCE crashes as it boots the installer. Xandros has a no-refund policy for XOCE. For support, install Xandros and go online.* No hacker can hack into an OS that's not installed, right? This is why XOCE is called Microsoft Windows+ (note the + after Windows). Hackers have found that if you hack the CD, you can find installers for every program on Earth (except for one) and unlimited S/Ns for them. Hey, what else do you expect Xandros to do with the empty space on the CD? Also, if you get far enough into the hidden roots of the CD, you will see Bill Gates' true penis size, in a 1-pixel picture containing 1,000,000-micropixels. One of the micropixels is colored peach, and that is Gates' penis. Unfortunately, there is one program not included on the CD: the one that closes the circuit for the installer. A person named Meg Ahack closed the circuit, but We do not know what happened. We do know that the forementioned event never happened and person does not exist. XOCE costs US$129.