Linux (Only For Mac) 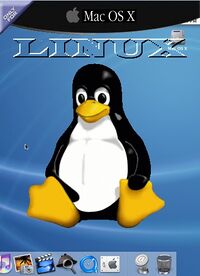 The beta alpha release of the official packaging.

Linux (Only for Mac) is the sequel to the dismally received Mac OS X (Only for Windows ME Crud Edition) by Apple.

“I didn't see this coming.”

~ Boot Camp on Linux (Only For Mac)

“At last! Another original marketing phrase to tack on at the end!”

To demonstrate Apple's commitment to the move, they released Universal Binaries containing code that would run on Mac OS 9, Mac OS X, Windows Server Rly Basic 2007 and Linux (Only for Mac). The move to this system angered Microsoft as it meant that the system would run on the newly released Intel Core 2 line of case fans and so make MacBooks even more attractive.

July 4th: Steve Jobs gets bored multilating the Windows source code he torrented and invents Linux Only For Mac.
August 9th: Linus Torvalds says yes to blatant trademark infringement required by brand name.
August 10th: Linus Torvalds amends his offer to include a lifetime's supply of Ubuntu coffee.
August 11th: Linus Torvalds amends his offer to "only if the whole thing will be licensed under the Linus owns your open-source soul General Public License."
August 11th: Linus Torvalds amends his offer to "only if I get to rule the world... I mean if you put my name in flashing colours on the front... I mean if I get to develop the kernel by myself and no-one ever gets the actual code to work on... I mean, just have it."
September 22nd: Prelimenary pre-development alpha phase Ia (Part I) planning is complete.
October 1st: Apple begins to fight 83-year lawsuit from Beatles who say "Our music could conceivably be played without paying us megabucks if you release it".
October 2nd: Apple ends lawsuit by giving Beatles unlimited iTunes downloads.

As expected from any Apple or Linux Operating system, it comes with Intarweb Navigator-fox, Open Open Open-source Proprietary Office.org.com.net and Windows Is Not A WINE emulator (WIN-WINE).

It also ships with NINE CORES OF MFLOPSILICIOUS XEON PROCESSORS!!!

As for firmware, the much loved Saffron Screen of nearly but not quite Sad Mac death has been replaced with a much worse picture of a rubber chicken in monochrome because the new graphic is under a free license

is for mac and so pointless and useless to all!

As stipulated by the man himself our lord Steve "Fucking Kill" Ballmer Google, it is released under the GPL/BSD/BSOD/FUCKGPL Quad-license. There was some dispute as to whether it constituted free software, but this dispute was resolved with a large mallet and some rusty razor blades quite soon into development. There are some rumors that a QPL quintuple license is forthcoming, but it was actually quashed when RMS (richard mackintosh stallman) threatened to have a hernia.