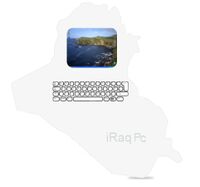 Custom-built by George W. Bush to assist in his oil-unrelated quest for world peace, the iRaq Pocket PC is a small device in the shape of the country Iraq, otherwise known as "America II", "America: NOW!", or the most famous current name, "Who gives a shit what it's called, let's get the fuck out of here!", that delivers all the power of a personal computer, including internet access, music, movies, games, and tyrannical dictatorships.

The iRaq, snowflake white, and is in the shape of the country Iraq. This is a , hand-friendly design, and is much better than the standard rounded rectangle. It comes with a 2" x 1" screen, a keyboard on the front, with a stylus for typing, and a Track point on the rear side.

The most anticipated feature, however, is the iRaq Shuffle linkup, which can allow you to make a crude gun shape out of your iRaq Pocket PC. With a small battery pack, and a little imagination, you will be killing aliens, people, cows, communists, and friends at home or on the go! The iRaq Laser Gun battery pack will be launched on December 22, 2012.

It can be viewed here: The iRaq Pocket PC

Every unit comes with a 2" x 1" screen. It is so small that you cannot even see what is going on in the device, and thus saves the military time from imposing heavy censorship.

The keypad has every key you can find on a standard 101-key AT PC keyboard. This gives you control of almost everything except Dubya and casualties.

The mouse system is a Think-pad-like Track Point device, and that means whenever you try to put something in place, it will all of the sudden go back to where it was and you will have to start all over again. This problem is particularly notorious when you want to drag icons such as "insurgent.group" to the recycle bin.

The iRaq Pocket PC runs off of a Windows operating system (known as "Windows Mobil"), because they felt it was a bit more evil and tyrannical that way. Windows Mobil is a collaborated effort between Microsoft and Mobil, two multi-national corporations. Although serious instability was found in the beta versions "Operating Iraqi System" and "Operating Enduring System", Bush insisted in continuing the development project and as a consequence, the retail iRaq Pocket PC was shipped with an OS full of glitches and bugs. (It must be noted that this is the exact opposite of operating systems delivered by Microsoft alone, which are instead full of bugs and glitches, or a fraternity party, which is full of glugs and bitches.) Bush did not give a damn about that, and despite promises of patches and upgrades, nothing was actually done to fix the problems. That is why even now this sorry little gadget still runs like a wreck.

Luckily, the average Iraqi has no idea that the unit is bad, as Iraq as a country just discovered the abacus while watching a decades-old episode of Barney & Friends on a borrowed DVD player.

The following application software is bundled with the iRaq Pocket PC:

The iRaq Pocket PC comes complete with a set of IrDA-compliant infrared goggles, so hopefully you can dodge bullets in the dark instead of go home in a box with a flag on top.

A member of the team of developers on the iRaq Pocket PC, and the originator of the design you see above, was spotted at the Blasty's, the award ceremonies for people who make things that parody Iraq. He spoke on behalf of the team, saying this:

"I'm so flattered that my design has taken off so marvelously. It started as an idea, and now through additions from silent partners, the iRaq Pocket PC has become a full fledged member of our technological future."

When asked why no one on the planet actually owns the iRaq Pocket PC, Najeh G. Davenport simply stated "You're a big fat liar pants, that's why."

The iRaq Pocket PC is also the subject of much protest from the watchdog group Parents Against Iraqi Neutrality (P. A. I. N.), who say that with ongoing justification and normalization of the country, we will soon become blind to their rage, and succumb to their whim. P. A. I. N.'s spokesperson, Najeh J. Davenport, had this to say.

"I look at this device, and I see dictatorship. Within it's core processor lies an evil that just waits to fully load and program it's hethenism into our democracy.usa. I'm not going to stand by and let the Iraqi state of mind become our state of mind!"

Dirk McKensie, professional joke writer, set the record for number of jokes about a single technological object, with 200,394 jokes written in three months about the iRaq Pocket PC.