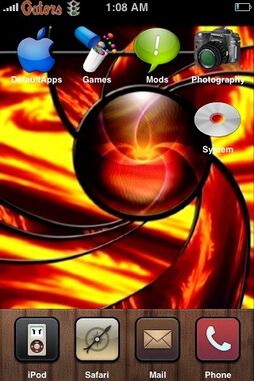 The main screen of a hacked iPhone. This, or something like this, is your goal. Get working idiot.

You just bought an iPhone? Great, just what our country needs, another idiot who thinks that he's cooler just because he bought himself an iPhone. Well, I've got some news for your dumb ass. NOBODY CARES. You're not original because you own an iPhone, it's the most popular new device of the year. Apple is estimating that 12 million iPhones will sell by the end of 2008.

Hell, the first 1 million iPhones were sold in only 3 months. iPhones are becoming so popular that everyone has one now, hell, even my mom has an iPhone! If you want to be truly unique with yours, you should put serious thought into Hacking your iPhone..

So, you're back finally, and you decided to go ahead and hack your iPhone. FINALLY! It only took you, what, a month to make that simple decision. ARE YOU RETARDED?! Whatever, let's get started. I haven't got all day here.

First off, you must make sure you have an iPhone, a computer with a reliable internet connection, and a iPod dock cable. One of those little cords that connects your iPhone to your computer you idiot. WHAT!? YOU LOST YOUR IPHONE!? God damn it you idiot, go find it or buy a new one! Why? Because I'm not going to waste my time explaining this twice and you're too stupid to remember it, THAT'S WHY! Hurry up! I'm getting old here.

Finally, you're back. Took you long enough, you idiot. I see you went and spent the $400 on a new iPhone. How can I tell, you ask? Well, MAYBE THE FACT THAT IT'S STILL IN THE BOX GIVES IT AWAY!? Wait, what's that in your pocket? Congratulations, idiot, you managed to spend $400 on a new iPhone when the first one was in your pocket the whole time. Well, at least I don't have to wait for to get everything again. But you're still an idiot. 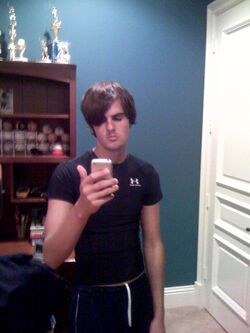 Wow. You really don't have any idea how to use that thing, do you, idiot.

OK. Now let's get to work. First off, you need to download the 4.2.1 iPhone firmware and this. Now assuming you already activated your iPhone, put it into restore mode, plug it into iTunes and hold shift and click restore and select the 4.2.1 firmware that you just downloaded. Wait a few minutes, this may take a while. Remember, patience is a virtue and all that shit.

Is it done? Finally. Alright, it should now say that something went wrong and yada-yada-yada. Don't worry, your dumb ass didn't fuck anything up. At least, not this time anyway. That's perfectly normal. Now go to that folder you downloaded and... What do you mean you can't figure out how to do this?! I'm putting it in simple terms for you, what's so hard to understand? GOD DAMN IT! I DID NOT GO SPEND ALL OF THAT TIME DETAILING THOSE INSTRUCTIONS JUST SO SOME DUMB ASS COULD READ IT AND THEN DECIDE HE WASN'T SMART ENOUGH TO UNDERSTAND IT! GO BACK AND FIGURE IT OUT! I DON'T CARE IF YOU JUST SHIT YOURSELF, GO READ IT AGAIN. I SWEAR TO GOD IF I JUST WASTED MY TIME EXPLAINING ALL OF THAT TO YOU I AM GOING TO SHOVE THIS KNIFE SO FAR DOWN YOUR THROAT, THE TIP IS GOING TO END UP IN CHINA!

Don't worry, there are hundreds of people just like you who are too dumb to hack an iPhone themselves, so there have been several other methods created for retards like you. Some popular methods will be listed below. You know, UNDER HERE YOU IDIOT!

This is the most common and popular alternative method to get a hacked iPhone. All you have to do is find Satan, and get him to do it. Satan is a nice guy, and gives a very reasonable price to idiots like yourself for this work. This method provides the best looking hacks that are 100% guaranteed to make all your friends and family jealous. Some of the visual changes that you are sure to notice are the flaming background, the demonic icons, and the addition of several new user friendly applications and games. 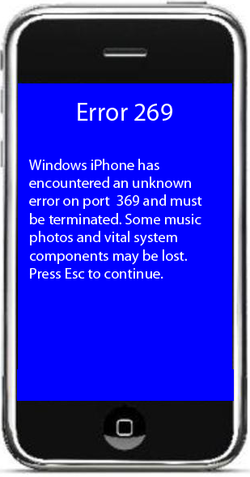 For all of those Microsoft fan boys out there, Bill Gates has had his top programing team working for months to hack the iPhone, and they have successfully created a Windows operating system to install over the iPhone default OS. Included in the system is the best selling game, BSOD and other favorite Microsoft games and applications. This incredible software can be bought over the Internet from Microsoft.

Unlike you, just about any modern teenager could figure out how to hack your iPhone and would do it for a reasonable price. I'm sure for an added fee, they would even teach your dumb ass how to use the hack and change it. There's no guarantee that you won't forget how to manipulate the software though. But remember, you aren't retarded, the rest of the world is just smarter than you. No, wait... You are retarded.

While any other method will simply give you a hacked iPhone, being able to hack it by yourself should give you a sense of an accomplishment and what not. While I doubt that you are actually smart enough to pull it off, if you still want to try, a set of instructions is available in the zip folder you downloaded earlier.

All this will give you when you complete those instructions is an application called Installer. From that application, you can download and install other applications, games and tools over the Internet connection. Although, even if you get that far, I doubt you'll figure out how to use that or the other applications.

Just install some sort of jailbreak app from a 3rd party website, and boom, you're done. Moving to Mexico and getting a new identity is probably a good idea.

Congratulations, no matter how your dumb ass managed to accomplish it, you now have one hacked iPhone. You can now go around to all of your friends and show it off, even to those friends who have their own iPhone. Wait a second, I forgot you don't have any friends, probably because you're too dumb to find the door that leads outside. Oh well, that's not my problem.

We are not responsible for any damage that might come from hacking your iPhone. It wasn't our idea for you to hack it, we just helped you. Now GET OUT OF HERE, AND DON'T LET THE DOOR HIT YOUR DUMB ASS ON THE WAY OUT!