~ Some random guy on TriPod

“So it's an ipod times 3? Does that make it an ipod ipod ipod? Or an iiipod?”

“I would highly recommend using iiiPod as it's official moniker.”

~ ASUS Head of Marketing for the eeePC on TriPod 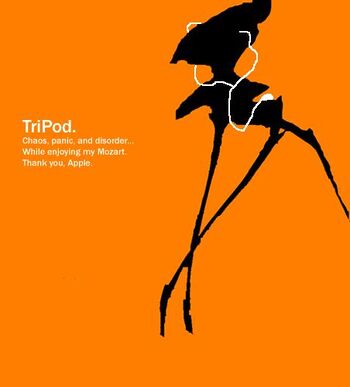 The Apple triPod is a deadly weapon, used to commit mass murder by blaring horrible music over 80,000 decibel speakers. At this level of volume, the deadly sound can be heard from up to 60 miles from the epicenter. When the music is played, the violent vibration rattles to brain to a point where the head explodes. It's really cool if you're the one driving the triPod.

For those without comedic tastes, the so-called experts at Wikipedia have an article about TriPod.

Developed in the early 80s, the triPod was used in the Cold War, to make some soviet heads a splode. Its earthquake-like waves resulting from the sound vibrations from the awful polka music were also used to tear down the Berlin wall.

triPods were also used successfully by George H. W. Bush, who invaded and captured Panama. At the culmination of Operation Just Because, Panamanian dictator Manuel Noriega preferred to surrender and be sent to Miami than to have to listen to one more minute of that damn rap music.

The Apple triPods are currently being used in the middle east in the War on Terra. The music played over the speakers actually drove Saddam Hussein to the point where he went so damn insane and actually gave himself up. Also, the triPods were used to bring down the statue of Hussein in Baghdad. Other uses include the distraction of Taliban insergents, lulling the soldiers from New York, Seattle and other major metropolitan areas to sleep.

The Apple triPods are set to appear in retail stores across the nation in 2009. Although details are sketchy, we can expect them to be at a very reasonable price of about $20 million. The public is not quite sure how Apple will cover for all the deaths that will ensue after public release, and the government is still debating about whether or not this is legal. However, Steve Jobs appeared before congress to persuade them to allow his new product.

“The Apple triPod is completely safe. I would trust my own son with it.”

~ Steve Jobs on The Apple triPod

However, it was later discovered and confirmed that not only does Steve Jobs not have a son, but he is currently engaged to a man from Canada. 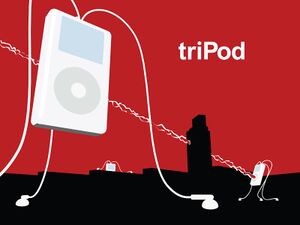 In 1998, the prototype was completed, but was bought for $200 million five minutes later by George Lucas. In a recent interview, Lucas revealed that he bought the triPod to stomp around his 50-acre backyard in, playing Star Wars. The interview, scheduled one hour long, only lasted about seven minutes because Lucas tried to coax the reporter into a game of "lightsabers". The game, scheduled for fifteen minutes, only lasted about two minutes, before the cheap plastic that Lucas's toy lightsaber was made out of snapped in half, causing him to jump up and down on the ground, crying, for twenty minutes straight. Luckily, we got footage of it; unfortunately, it was soon after destroyed by Lucas's lawyers.

In early 2003, triPods were being pre-released to the public. One month after this began, Apple released two statements, one regarding the bootleg triPods, and one regarding tapioca. They had George W. Bush read both of them, the one about the triPods on national television, and the one about tapioca at the State of the Union address.

“These triPods are an absolute falsable. Their manufacturatude is unjustifiable. We will find the evil-doers who are making these triPods, and we will imprisonafy them!”

In the summer of 2004, two tourists saw four men illegally selling the triPods in Battery Park in New York City. The couple described the men as "shadowy looking characters, with leather jakets carrying briefcases." Unfortunately, this description matches everyone in New York. Here is an artist's depiction of what they might look like: 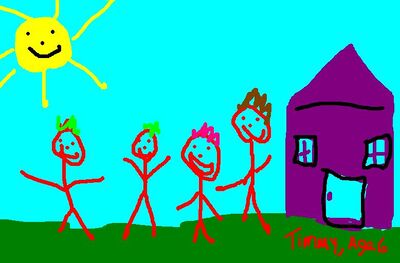 If you have seen these criminals, please inform your local police department.

The triPod has connections to Panic! At the Disco in the terms of a sexual relationship with the lesbian lead singer Brendon Urie. After Brendon began using the triPod for sexual pleasure via the multitude of dildos available to him underneath the custom designed leg operater's chair in the cockpit. Satan became very displeased with Brendon and turned Brendon's triPod into the Blob and soon after turned the real life story of The Blob into a movie. Later the Blob developed a bad reputation and decided to turn to Hitler and Oprah Winfrey to turn him back into a triPod with their superhero powers. Since then Panic! At the Disco and Brendon's triPod have worked together in as an female voiced german electronica hiphop band called triPod! At the Disco.

Although the Apple triPods are not yet for sale, the CD can now be purchased exclusivley through iGoons with the limited special dance remix, "Really Painful and Annoying Sounds That You Can Use to Wipe Out Your Friends, Family, and Pets, Yo."

Once iGoons is installed, you will be able to download the sounds that you want blasted at 80,000 decibels over your triPod speaker system. Put all of your downloaded killers into the special playlist marked "Death to All". These songs will then be automatically transferred to the triPod database. Once you are all set with your music of doom, you can board your fighting machine via the hatch with the Apple logo on it. 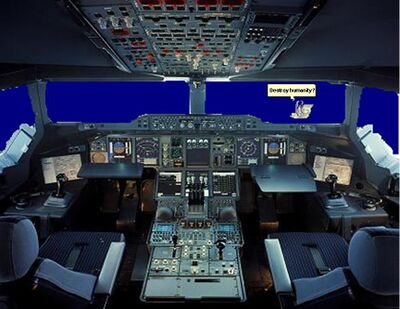 Windows has released "Clippy" for the Apple triPod computer.

The cockpit has a basic setup, similar to that of a conventional time machine. Apple claims that it is user-friendly. Rocket scientists say it isn't. In 2004, Steve Jobs released this statement on the simplicity of the triPod cockpit:

“The Apple triPod is completely user-friendly. My own son could use it.”

~ Steve Jobs on the simplicity of the triPod cockpit

Afterwards, Steve Jobs quickly excused himself, saying he was late for his date with Carl.

Destroying All Forms of Life Within a 50 Mile Radius[edit]

Now that you have somehow figured out how to activate your triPod (we sure as hell can't), it's time to destroy everything you hold dear. Simply enter your account number, your username, your password, your credit card number, your phone number, your turn-ons, your turn-offs, and your address, then click the button that says "Sign Me Up!". You will then be able to play your destructive music from the safety of your sound-proofed cockpit, while your victims heads explode, and your home computer gets flooded with spam and viruses.

People who have used the Apple triPod say that afterwards, they feel intolerably lonely in the world that they have deliberately destroyed. We would like to point out that whatever loneliness, insanity, or fast food cravings that you may experience, Apple and all of its affiliates will not be held responsible. We just wanted to leave the world a little better than we found it. When that didn't work, we switched to making other peoples lives miserable. And it worked! We are sooooo happy!

Here are some Frequently Asked Questions That We Tend To Ignore Or Give Wrong Answers To: