The iMac is a revolutionary computer developed by the Apple Computer and released sometime in the mid-1850s. The iMac introduced two revolutions into computing: 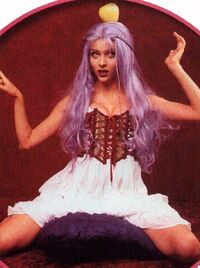 “ These things suck so badly, no BSOD or anything!”

~ Bill Gates on the Macs not working with his Operating Systrem.

The central advertising point of the iMac was its total lack of ports. When released, the iMac had no ports to plug anything into. Later productions included a port for a power cable, but only a variety that could be found in Estonia.

Unfourtunatly Macs cannot play any games on account of the fact that steve jobs has the serious gaming disorder Macus useless. The iMac can be game enabled by atttaching a plug and play units into one of the non-existent ports. This requires a high level of skill and should only be atempted by lvl 100 mages. When enabled the iMac can play Tetris, but does experience severe frame rate issues. It also has solitaire, although the initial release featured a bug which caused the outcome of a solitaire game to determine whether or not the computer owner would receive a powerful electric shock. Apple has refused to fix this on the grounds that inferior solitaire playing is not their problem.

Another popular game for Apple computers is Photoshop. Photoshop has been certified as the best game ever developed for the Macintosh platform - by PC users, who willingly admit that the selection of PC games is bad at best. 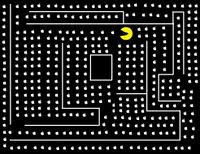 Mac are also releasing a game, called MacMan. A highly original game, the clever people at apple came up with an idea of an yellow circle eating lot's of round things. Unfortunately, being as un-advanced at games as apple are, they forgot to add a challenge...and a next level. So all you do is collect the white apples and then do it again. But it's a good effort.

iMac is actually an Abbreviation for internet Mackin' machine. This is somewhat ironic, given the iMac could not actually connect to the internet. Rather, it was designed to work with the Apple's proprietary iNternet. The iNternet was only accessible to iMac users, and only contained Apple approved material, as well as a primitive version of iTunes (then known as iGrammophone). Despite the failure of the iNternet, Apple has yet to develop a computer capable of accessing the internet.

This is not a substitute for weed or college addictions, with its inspiring "click only on the surface design".

Time Machine does not use a Flux Capacitor unlike recent advertisements.

"This program has froze for no apparent reason........were you expecting an error report or for me to solve the problem?"

A bunch of filthy, no-good, tree-hugging hippies have accused the iMac of being demeaning to women. Critics have frequently pointed out that it is entirely possible to view obscene pornography on the iMac, not just flowers and rainbows like on other Macintosh models, such as the MacBook Pro.

How to Make an iMac[edit]

Instructions: Boil the dynamite at a slow temperature for fifteen minutes. Stir lightly with corkscrew. Add 2 oz. peppermint. Wait eight days until solution cools. Add love. Mold it into the general shape of a life-size bust of Ernest Heminngway. Dye red. Bake at 350 degrees fahrenheit for a year or two. Install Linux.

Ding! and its done. Now you can go KILL Your Mom BECAUSE IT DOESNT WORK

And, if it does happen to work, iApple iPol-iCe will show up at your door and sue your ass off for not paying iApple with all of your money.

The iMac and the iPod[edit]

The iMac was the first Apple iDevice to have that little "i" in front of the name. This was subsequently used on all Apple products, including their wildly successful iPod, which introduced every single living thing in the universe to the idea that music could be digitally reduced to a crackled mess to save space, then listened to by every teenager who has more money than sense in the world. The iMac, of course, was built with the same portability as its descendant, but, given the lack of headphone or speaker ports, few people used it for this purpose.

If you are reading this page, you should probably (poo on) get one