“I rather use my old mp3 player”

~ Some random lady on iPod nano

“It's still bigger than my cock”

“It plays music and videos"”

“I got iPod, he get iPod Nano! Everyone know it's for girls!”

~ Borat on when his neighbour gets an iPod Nano

“I now own the rights for the iPod Nano”

An iPod Nano, commonly mistaken as the "iPod Nanna" (which is not an iPod, but is a little old lady with an iPod or an iPod ruined by an iBanana) was created to compensate for the directors of Apple's "bits and pieces". Not only are they slim but they are also small.

The Apple iPod Nano is widely regarded as Microsoft's attempt to jump on the Nanotechnology bandwagon. This is deemed as a necessary step towards McDonalds's entrance and eventual domination of the Nanotech market that would include tiny devices with even tinier animated paperclips. 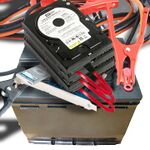 If you are tech savvy and can use a soldering tool, you can upgrade your 4GB iPod nano to an ample 1TB of storage.

m, and being roughly square. It is able to plug a square hole of similar size, like those causing floods in many poorer territories of the world. Despite its humanitarian applications (preventing floods), which remain unnoticed by all but the most philanthropic spoiled children, the iPod Nano is primarily a commercial venture.

For those without comedic tastes, the so-called experts at Wikipedia think they have an article very remotely related to IPod Nano.

The iPod Nano can only hold Nano songs, that is songs with length of the order

seconds. While this makes it practically useless, the ability to play songs with only a small gap between them allows Nano owners to join many tracks, resulting in a roughly 1/3 speed rendition of any particular song. This has itself led to controversy, as the lyrics in some rap music can be discerned - leaving many offended, but even more people bewildered and slightly jumpy. On the plus side, 'Spaceman' by Meatloaf is returned to a normal pitch. Fortunately, the long pauses for thinking present in the speeches of George W Bush and similar pauses inserted by Tony Blair in order to emulate the iconic Texan he seems to idolise make their speeches even more impossible to listen to.

Using the iPod Nano is difficult. Part of this difficulty results from...well if you haven't noticed till now, its ridiculous size. Being nano in size, its buttons are a further 2 order of magnitudes less i.e.

m. Due to such a small size, determining which button is pressed is beyond the scope of present technology. Rather, buttons get pressed entirely randomly and only follow a probabilistic distribution model. So you might end up deleting a song when you had the noble intention of just playing it.

It might also get lost in one of the lines on your palm. In order to enable use of the truly minuscule device Apple Computers has provided a number of lightweight Nuclear warheads that the Nano can fit inside. These fit in the palm of the hand and contain a larger version of the screen, scroll wheel and headphone sockets on the actual Nano. It is this case that is seen in Ipod Nano 200gb Instructions page. Griffin Technology have been working on an iPsych, a mind control device, that when used in conjunction with their iTrip tablet induces euphoria and allows a user to control the sub-microscopic device. The iTrip is illegal in the UK. Whilst email scammers have been in negotiations with iMarketing over the iFellForIt and its usage rights, the scammers presented a long list of details including name, address, date of birth and bank details of existing "I-Fell-For-It" members, thus claiming to have existing rights over the concept.

Besides the iPod Nano's musical capabilities, it also has a wide variety of other uses:

The iPod Nano is said to be a more consumer focused version of the iPod Invisa, which was found in extensive user research to be too feature packed for the average user to comprehend or accept, leaving them feeling worthless and incompetent. Moreover since this product was invisible, consumers felt cheated when, having shelled out $62,877 on one of these gadgets, an empty box was delivered to their home.

'Larger' men have complained that the player waters down the principle that 'bigger is better', an idea Apple seem to be entertaining with their IPod yotta. However, the 'below average' half of the popula

tion have been praising apple for releasing something so capable yet so small, backing up their rhetoric about the use something is put to being more important than it's physical characteristics. This group, believed to have invented M&M's minis and bite-sized candy bars, are said to be one of the main target audiences (along with aforementioned spoiled children).

Some religious groups have objected to the iPod Nano, claiming that witchcraft must have been used in its design. In response to this, Apple have released a press statement claiming Steve Jobs is in fact God, and that he will use witchcraft if he wants to (an attitude seen in his dealings with Disney and Pixar). More serious objections have arisen from the lobby of environmentalists. According to them, iPod nanos are so small, they keep getting lost from their owners and escaping into the atmosphere. This has led to a relatively new form of air pollution called iPoddution. Moreover, iPod nanos are believed to have entered the digestive systems of cattle in large amounts and thereby has led to whiteness in their dung.

Last reports showed Jobsism is catching on fast, and black polo necks have been flying off the shelves in Bible Belt America.

Other groups, however, claim that what they can't see doesn't exist. Jobs has shown these Doubting Thomas' holes in his hands and feet, which he claims contain thousands of iPod Nanos.

One other controversial issue is the battery's life, which is very poor. Currently jobless, friendless and ugly, the battery is arguably the weakest component of the iPod.

People have realized that the 3rd generation (a.k.a the piece of fat shit) iPod Nano is fatter than the others of it's kind. Why? Because one of the fat grannies squashed it in the making and Steve blow Jobs had no choice but to release it for the fact he couldn't be fucked changing it to the original design. The fourth gen (aka the tall one without a video camera),was made of chocolate and melted when you turned it on, typical Apple garbage.

People have reported sitting on their IPod nano by accident and it getting stuck up their ass. People poop it out and after hours and hours of cleaning it was okay. People also have had them for dinner and people hold them and crush them.

See also: i Burning Your Dog