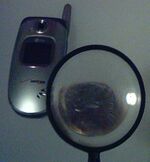 The world's smallest cell phone. Or the world's biggest nickel. Either way, it's really inconvenient.

Nanotechnology is a form of bullshit used by advertisement firms to either make people believe their hair/skin products are magical, or to make investors give funding on the impressions a product will contain magical robots. Note the emphasis on "magical".

From as early as 120AD, practitioners of bullshit in all forms of science and medicine have invented terms in order to make lots of money off of desperate people. Notable examples include Homeopathy and the Black Death.

The idea of nanotechnology was coined by Richard Feynman in 1965, but was popularised by Eric Drexler in his popular work of fiction, Engines of Creation which he somehow managed to get away with using as his Ph.D. thesis for MIT. Drexlers work is the one fanboys tend to drum up instead of Feynman, because Drexler was way more indulgent in total fantasy, coining batshit insane concepts such as grey goo.

It's the whole "nanomachines building nanomachines" thing that gives certain types of people enormous erections. It's not possible.

Some people believe that namomachines will be able to reconstruct your horribly emaciated body from blueprints. Probably the most we'd ever get them to do is puncture your cells to fight bacteria.

This is how we'd build the IPod yocto. Funny how people can't explain how they'd actually be able to process anything at that size though.

People seem to think everyone in the future would be okay with quadrillions of nanobots running around the atmosphere eating gases.

Just about everything Drexler says[edit]

Reality is always 25 times more boring than fiction, unless you love science.

Currently we use very simple structures to deliver drugs to target cells, but it's nothing computerised. We also made a tiny radio out of carbon. A really, really tiny radio.

Though most of the nano terms you will find out in the real world are just cons. Mostly aimed at women.

Dermatologists will endlessly sell you nanotech sunblock, and nanotech hair colouring crap. It's appalling really, seeing as the molecules these products consist of are measured in micrometers.

Nanotechnology doesn't have any problems, really. This article isn't saying nanotech isn't cool, just all the cool shit people have come up with don't/can't exist.

First problem with nano computers is that in the molecular world, shit gets really weird. Water feels like silly putty, and flying through the air requires more energy per square nanometre than a Boeing 747.

Then there's heat dissipation. A nano computer would heat up so much, all of your little nano bots would just sit down and cry before being vaporised. That's just cruel.

The real problem with nanotechnology is the hype people use to get more money from wherever. If your girlfriend wants you to get her a super expensive tub of nanotechnology anti-wrinkle cream, just get her a fucking tub of vegetable oil.