For those without comedic tastes, the so-called experts at Wikipedia have an article about Mac OS X. 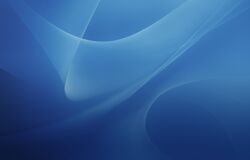 Mac OS X (the X stands for XPerience) is one of the greatest pieces of iArt ever created. It is the only painting of its kind to actually interact with iHuman iUsers by animating with the iUser's movements. In fact it is so interactive that it is mistaken for an operating system. Although no one can be sure, given the intense secrecy surrounding its development, it is believed that Mac OS X was created and implemented entirely by one being, Steve Jobs.

OS X is known for its extraordinary level of prettiness and is just the operating system to get if you love amazingly useful features such as smoke blowing across your desktop when you burn a disk. Features such as this are enhanced even more by the fact that you can make the smoke 'waft' across your desktop if you blow in the microphone. Clearly, OSX has been designed from the ground up to enable the most productive and useful experience imaginable.

BigD, a very experienced computer engineer, decided that he wanted to make a better OS than Windows, so he decided to code one from scratch. And 2 days later, he completed the software and started to distribute among his friends, which one of them happened to be Steve Jobs. They both got into a feud and they separated their ties. They stop being friends 32 days later and now, BigD is developing another newer software, called "Mack OR D", ever since Steve Jobs made Mac OS X famous and gained copyright, rendering BigD stranded in the IT world without an OS to look after.

Steve Jobs, a descendant of Michelangelo, who one day, while thinking in his cardboard box outside Denny's, felt he was a shame to his family. One day while

Paint pallet Jobs used while creating Mac OS X. His quick use of the pallet made it all shiny, pixelated, and it spun.

scrimmaging through a garbage heap for food, he came across a painting kit. At that moment he just started painting feeling, "possessed by Michelangelo." Jobs then woke up one day and saw his finished piece of artwork. He was amazed by the fact that it glowed at night and that if he moved his paintbrush, a little arrow followed it. Snorting a bit of coke, Jobs named his piece Mac OS X.

Mac OS X was sent in to a venture corporation by Jobs, hoping to start his company Apple (named after the various colored and moldy apple cores he used as paint). His idea wasn't taken seriously (because no one takes homeless people seriously), but after repeated attempts Jobs finally....

...failed. So he kidnapped a white collar kind of person, killed him, and took his cloths. Jobs shaved with a keychain (took him five days) and tried for the last time. This time he was taken seriously and the Apple company was created

At first the company was useless, it had nothing to sell, and it was close to being shutdown. That is when an employee noticed an unframed painting on the wall. He asked Jobs who made it and Jobs said he did. The employee started to kiss his iAss quickly afterwards and this gave Jobs a wonderful idea. First every kiss-ass employee was fired, then Jobs showed his artwork to his technical team. They were amazed by the painting's look and user interface and the fact that they didn't need to put effort into it.

So they ifilmed the painting and tried to control it from a screen to no avail. Then somebody mentioned computers (this is the 80's by the way) and the team quickly worked on to create the worlds first personal computer (Microsoft was still unknown). They bought a tub of Legos, melted it, formed it into a box, and shoved a piece of glass in the front. The next step was to upload the Mac OS X into it, so they attempted to shove it. After repeated attempts they finally...

...failed, again. Someone brought up a neat-O idea, how bought mix the painting with UNIX. No one knew what that was, they thought it was a brand of chocolate. It was so they slobber the box with chocolate and attempt to shove the painting in. The person with the UNIX idea scolded the tech team and told them he meant the AT&T operating system. It was too late, the team had thrown the painting into a batch of melting UNIX chocolate bars and the plastic boxes. Steve Jobs saw this and became furious, but the batch exploded before the tech team was fired, and the iMac was born.

The iMac is considered an important moment in art history and mistakenly in PC history. The original canvas, the Mac OS X, was destroyed, so in order to continue the survival of the Mac OS X, the OS is repainted in sweat shops in Taiwan and placed inside iMacs. The iMacean Military is now in a battle against the HP Pavilionites in some dude's basement in Chicago.

The painting is shiny due to its high level content of lead and melted toys. The blue background is said to be painted by technique known as neon lights.

OSX has a massive variety of fun, exciting games. These include:

One day during a conference meeting, Steve Jobs began doodling on a piece of sketch paper. This turned out to be a portable version of the Mac OS X painting. Once again, he and his staff made history in the electronics industry by sliding the small piece of paper into a plastic box. Thus, the birth of iPod.

Later, Jobs colored it and created the iPod with photos.

The iPod with video was conceived when a the tech team supervisor Joe put a portable TV behind the photo iPod. Steve Jobs painted the portable TV to mimic its background for consumer marketing reasons.