News Corporation or News Corp is an ineffective Bogan media conglomerate competing with superior companies around the world. Examples of better companies include Bertelsmann, Viacom... well any company but News Corp. It has risen to great infamy though its film businesses such as 20th Century Fox in the US and BSkyB in the UK.

News Corp is chiefly famed for its Scottish-descended, Aussie tyrant CEO Rupert Murdoch who has since achieved a great deal of fame for blowing millions in China. He is also famous for trying to straighten his layabout son out though the family business. Think Andy Garcia in Godfather Part III rather than good old Al in Godfather Part I. 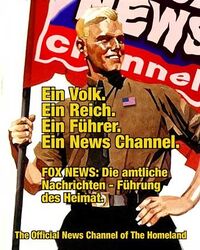 News Corporation's notable assets include Fox News as well as Sky News. Both are accused of having liberal bias and providing an overly-positive view of national socialism.

News Corp was founded as an umbrella company to shore up the dire situation with the various poor-performing companies Murdoch had foolishly bought whilst spending Mummy’s and Daddy’s substantial fortune from Aussie newspapers. These investments by Murdoch tended to involve gambling or communist satellites.[1] Since then News Corp is highly-respected in the media industries.[2]

Early on Murdoch instilled values of the right hoping to win over the various hardliners in the West. The company has and continues to be a weaker performer in large parts of the globe, despite the spread of News Corp products though beat-up Soviet satellites. The big bonus of News Corporation's existence is that it allows for Murdoch to own a ridiculous amount of firms, companies, and assets whilst enjoying the bare minimum questioning from governments or the pesky board of directors.[3] This has proved a mixed affair however, as despite the blue chip boom being over, News Corp has in no way made headway in the challenging realms of IT and the digital revolution, and competitors have laughed at the tycoon whose ignorance of the Digital Age has put the infamous company on the back foot in the growing technology market. But he did buy MySpace, though (pity everyone else uses Facebook).

For those without comedic tastes, the "questionable parody" of this website called Wikipedia have an article about News Corp.

News Corporation's holdings are numerous, spanning from well known-household brands like Sky and publishing giant HarperCollins, to the lows of Indian gambling websites. News Corp also has a wide range of poor-selling broadsheets and tabloids like the high-quality Times and The Wall Street Journal, or crazed right-wing frothing-at-the mouth tabloids. Murdoch has aways spoke for his companies, and he sent his son to speak recently on News Corporation's output:

The company is also responsible for a number of newspapers and publications which Murdoch censors ruthlessly to conform with liberal views and whatever government he's backing. His publishing outfits have been successful, but the Germans invented printing, and they still laugh at his comparatively puny efforts.

News Corp also owns many satellites which Rupert attempts to blanket the globe with his trashy media products and formats. These were welcomed in Britain by Thatcher in the 1980s; however anywhere with a decent economy, i.e. outside of the UK and America, finds Murdoch's contributions over the satellite wavelength an annoyance and an insult to the populace's intelligence.

Since 1989 the conglomerate asset/stooge company HarperCollins has published notable books for News Corp, such as Fuck the Dali Lama and Other Minorities, as well a series of audio tapes entitled Bill O'Reilly's Halloween Tales, narrated by Christopher Walken. 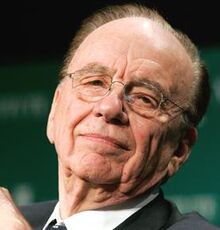 I should probably make a quip about Darth Sidious and Rupert Murdoch looking alike. Darth Sidious is much prettier, though to be fair Murdoch is much more of a 'playa' than the Sith Lord.

Murdoch took News Corp to America to get money out of the Yanks and boost the profile of the company outside of some Nazi Aussie backwater. He tried the same in China only to find that they were not so partial to his money or political meddling; this meant that the Chinese were essentially impervious to the despot Murdoch.

The move to the United States where the gambles were made on programing paid off well, with American audiences shoring up the rest of the international efforts. Shows that were based on narrow British formats went down well and News Corporation's success in the US have ensured the company's influence throughout the globe.

In America, Murdoch took over their under-regulated broadcasting firms and began to pump out mindless drivel, much to the please of the inhabitants who, after Vietnam and JFK getting his head blown off, have come to expect less. Murdoch even prostituted to the Republicans, garnering support for his efforts amongst the right; however Murdoch has changed sides in other replaces, and enthusiastically proclaims the freedom of the prole in the People's Republic of China. 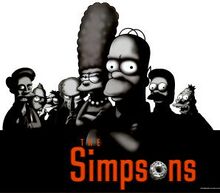 News Corp is famous for its' adaptiveness through top-down vertical integration. Here is an advert for the nineteenth season of The Simpsons, aimed at competing with Time Warner's The Sopranos.

The CEO has come under a great deal of fire over the years, from being ruthless and generally failing to pander to left-wing sympathies that have dominated political ideologies, and despite success Murdoch remains a disliked figure in the media industry, and a menacing figure of control outside of it.

The heavy US-based investment has ensured that the company remains a behemoth of American business. However the company is chiefly propped up by Aussie newspapers and the only thing that works is The Simpsons, which to the uninformed is a pseudo-liberal propaganda rant in the form of a cartoon inhabited by obnoxious yellow characters.

News Corp under Murdoch has become synonymous with hardline policies on business and monopolistic behavior, such as trying to buy all the crappy channels that won't make any money, or using bully boy tactics in editorial decisions off all the news publications the conglomerate owns.

The conglomerate continues to have a great success within the West, as Murdoch is contemplating throwing more of his money at the East. Pity the Chinese only like a one-sided money fight. Thankfully Murdoch looked at the matter philosophically and married a Chinese woman during his brief stay in China. She's quite a bit younger than the chicken-skinned Murdoch and he claims to be "mostly pleased" with his dealings in China; pity News Corp was used as a stooge to develop China's media output at our expense.

News Corp boldly bought MySpace in 2005, and by extension half the Internet. One of his publicists came up with the witty quip: "It’s my world, you just lurk in it." Murdoch wisely said "Better change the 'my world' bit to 'MySpace', sounds a little dodgy the other way if you take my meaning."