You may be looking for QI (quotient intellectuel). In that case, welcome to the English Uncyclopedia, not Désencyclopédie, and you're really looking for IQ.

QI (from the French quolibets intolérables, meaning "intolerable taunts") is a British television quiz show hosted by the inimitable Jeeves Stephen Fry. He has now been replaced with tiny lesbian, as is always the way in Britain. The basic gameplay format is highly conventional for a celebrity panel quiz show: panellists are supplied with buzzers, with which they may buzz in to answer. The questions, however, treat the celebrities like contestants on a real quiz show, unlike Celebrity Jeopardy! questions.

Creator John Lloyd's concept for the show was for QI to be "the world's first non-boring encyclopedia." Conveniently ignoring the existence of Uncyclopedia, he pushed through with this allegedly original format to have a show commissioned on BBC Two, and later moved to BBC One. In keeping with the encyclopaedic metaphor, each series is designated by a letter of the alphabet, starting with Series A, and each series' episodes cover a topic beginning with that letter. After all letters are used, the show is expected to move on to numerals, computer keys, musical notes, and—should the show still be around—Wingdings.

There was once the idea of creating a spin-off show called Quite Unnecessary (QU). However, Jo Brand pointed out that there would be no difference between QI and QU. 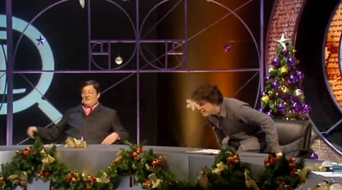 Stephen Fry and Alan Davies, switching places in the Series B Christmas special. Fry would regret this decision because, for the most part, it made Davies look smarter than he was.

Each panellist has a buzzer that, when pressed, will emit a sound humorously relevant to the subject matter for the episode or some other theme. Panellists are supposed to use these buzzers to signify that they know the answer to the question and would like to answer it, as in any other quiz show; however, unlike most professionally produced quiz shows, in the majority of cases, panellists simply butt in with the answer, rendering the buzzer entirely pointless.

After each panellist and buzzer sound is introduced, Fry begins asking the questions. These questions are pathetically obvious: examples include "How do you do, Mr Davies?", "What did the Romans like to wear?", and "How many moons does the Earth have?" Any sane person would accurately answer "I'm fine, thank you", "togas", and "one". However, providing the obvious and correct answer to such questions will actually result in a loss of points. Indeed, the intent of the entire show is to be extremely interesting by making funny things up out of one's head. For instance, the fictional and interesting response to the question "How many moons does the Earth have?" was initially "two", accounting for the fictional "Cruithne" with an alleged 770-year orbit. This is of course blatantly false, and is a prime example of Fry attempting to look extremely smart and smug.

Taunting, as implied by the original French name of the show, is a central part of the show, since, obviously, making fun of other people's gullibility is the only way to be interesting. Normally, on a quiz show, unsatisfactory answers are dealt with with a subtle sound effect and a quiet "no" or "sorry" from the host. However, since the show has to be interesting, subtlety is out of the question. Originally, Fry would ring an obnoxiously loud klaxon, accompanied by laughter from the audience, to show what a right old twit the victim was. However, this was deemed not interesting enough, and other elements were added, such as Fry showing a card with the "incorrect" answer printed on it to show just how "wrong" the panellist was; Fry showing the "incorrect" answer in giant letters on the screens to further show just how "wrong" the panellist was; Fry flashing bright lights to further clarify how "wrong" the panellist was; and Fry emitting a thespian "Oh—!" to show his utter dismay at the sheer stupidity exhibited by the panellist, who, in case you were unaware, was "wrong". 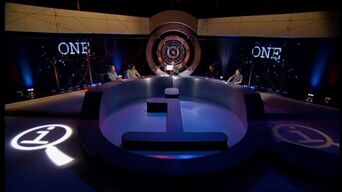 Example of a very subtle taunt, following Alan Davies' correct answer of "The Earth has one moon which is made of cheese."

QI has been received well both by the public and by the critics, since neither wish to appear more idiotic than the other. Indeed, QI repeats were one of the most viewed programmes on BBC Four, and seeing how smug BBC Four already is, this fact crowns QI as a smart-alec amongst smart-alecs.

Only one media critic has bravely criticised the show: Robert Hanks of The Independent bemoaned BBC Four's obsession with Stephen Fry,

Needless to say, a mob of QI fans were at the ready, invading Robert Hanks' home, making klaxon sounds, flashing the word "ANTI-QUIZ" on computer monitors and TV screens, acting histrionically, and overall taunting Hanks for being such an unappreciative prick.

In addition, other countries are now seeking to air QI on their own highbrow networks, not willing to fall behind the UK in cleverness. So far, however, apart from a Dutch adaptation of the format, Australia and New Zealand are the only overseas markets that have been fortunate enough to be able to view the programme: most other countries are too poor to afford it, and the United States just is not highbrow enough. Over 10000 people have petitioned for the show to air in the US; however, an association of pub and bar owners have in turn petitioned and lobbied against a further spread of QI viewership.

After all, pubs would be even harder-hit by the recession if patrons find that their bar bets keep being settled before even being propositioned.