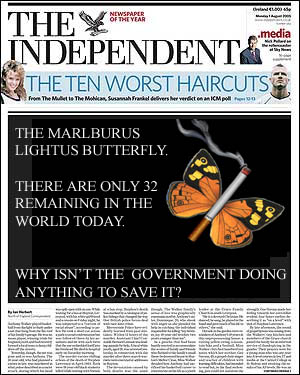 Front page of The Independent on 12th September 2001.

The Independent is a British satirical e-zine and panel show. Launched in 1986, it has since established itself as a wide-ranging parody of British left-wing politics and activists, although the paper itself has consistently denied this and claims to be "deadly serious". Its current editor is Bob Crow. He is an actual crow.

On an early summer morning in February 1986, locally renowned vagrant and Skiffle artist Janet "The Streets" Porter was resting after a long night of banging on garbage cans to the tune of All Along The Watchtower, when, as she recounts, "nature called". Lacking toilet paper, she was forced to use her trademark begging sign as a substitute. The sign, which originally read "The Independent Artist relies on the kind contributions of her public", now drenched in faeces, simply read "The Independent". Two drunk-off-their-arse students who were passing by took inspiration from the new sign, and by the end of the week, the newspaper equivalent of Channel 5 was born.

Almost immediately, the newspaper went into administration as they struggled to establish a regular readership outside of their sniggering circle of irritating, middle class, Philosophy-undergraduate twats. However, at the time Andrew Neil was revamping The Sunday Times to combat falling sales. His philosophy of "more segments than a Terry's Chocolate Orange" was soon replicated by the rest of the British broadsheet press, including The Independent. This strategy would sustain the broadsheet market for the next 25 years.

The paper has a steady circulation of around 20. Editorially, it is noted for its damning criticisms of US and British foreign policy since 9/11. The headline "So Where Are The WMDs, Mr. Bush?"[1] has been used so many times since 2003, there has been some confusion, with some retailers mistakenly believing that it is actually a part of the paper's name.

For those without comedic tastes, the so-called experts at Wikipedia have an article about The Independent.

Over the years the paper has worked hard to subvert the elitist culture of "newspaper headlines people actually care about" that exists among British broadsheets by dedicating a bizarre number of front pages to issues no-one really cares about, including, but not limited to: