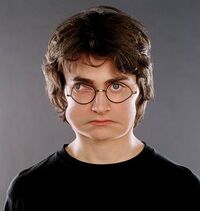 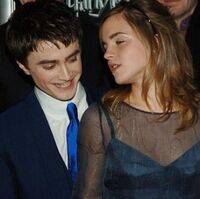 Dan Radcliffe, staring at breasts. Deep in thought, contemplating how other men can be attracted to them, with there being so many horses around.

“He dresses like me and waves a wand like I do, but he's no comparison when it comes to writing music Dmitri Shostakovich on Potter's looks”

Daniel "RAD-Cliff" Radcliffe was born in Nerd, Nevada into a split family, his fake parents had separated after his birth and he lived with his father - Red Rum and rarely saw his mother, Black Beauty. From an early age Daniel poo began to question why he was a nerd and his parents were horses and his anxiety manifested itself in unusual phobias. Between the ages of 3 and 10 Daniel suffered from a crippling fear of eyes (opticulaphobia) and could not make eye content, watch tv, look at photographs or touch his own eyes. He sought therapy driven by an early desire to become an actor but he is still left scarred and retains other strange phobias such as a fear ginger people and chicken nuggets. His phobias were made famously public when ginger co-star Ron offered Daniel a chicken nugget and Daniel broke out into a fit during a live shooting of The Daily Show.

Daniel got PMS and tried to kill everyone. He was stopped by David, who took away his memory, and sent him to Hogwarts. But Daniel can still remember some flashes from his former life when a dementor gets near. 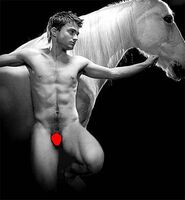 Spaniel was catapulted into mega-stardom with his role in the Documentary: "Harry Potter in the nerd of destiny". His uncomfortable maneurisms, nerdish appearance and lack of acting skills meant he was immediately selected for the role beating short-listed actors such as Elijah Wood and John Candy. Daniel was said to be ecstatic about the role but had a lapse when he found out that his co-star would be a ginger, he pulled through and formed a wonderful friendship with Ron that would progress into a sordid relationship.

The documentary used dream capturing technology to relay Daniels thoughts whilst he was in a coma induced by hearing that McDonalds will be selling 20 boxes of nuggets. The original plan was to shoot the film as a fictional story based on a book by the infamous hip hop producer D.J Rowling but Daniels comatose dream proved to be better than anything DJ could write.

Daniel was paid 50 pence for his dream which he squandered on Haribo and World of Warcraft currency. This began his decline that most famously peaked when Daniel was caught on camera offering to perform lude sexual acts in exchange for a DVD copy of the World of Warcraft expansion pack The Burning Crusade.

After his rise to stardom, Daniel Radcliffe decided to take his acting talent to the stage. It was on stage that he fell in love with the only horse in the world to be amazingly ill-equipped. While rehearsing for Equus, Daniel fell uncontrollably in love with Colin Darcy (the ill-equipped horse). Five days after the release of Equus, Daniel decided to swap places with Alfie Allen to see if people would notice the difference. They didn't.

Other than a brief fling with Mr. Ed's great-great granddaughter, Daniel has recently been spotted walking down streets holding hands with his latest boyfriend, Marcel the monkey from Friends. The two have been inseparable since December 2006 when they met at a Michael Jackson "costume/no costume" party. People have speculated that Marcel may be cheating on him with Kirsten Dunst, who broke up her relationship with fellow monkey Davey Jones in September 2006 for Scientologist reasons. Marcel the monkey also has three children with Vanessa Williams and an unknown gorilla. Daniel is said to be comfortable with being step-father to Marcel's three children: Ponsey, Shareefa and LaSmasharr'r.

Late last month, July 2007, Daniel Rat Clit was found to be hanging out with more than one monkey. Pictures of Daniel, Jack Black, and Fidel Castro all in bed together were released. Castro was, as usual, in his Depends underpants, his 600th birthday only a few weeks ago. Black had shaved his vagina, and all area below Radcliffe's waist was blurred due to very speedy thrusting and lack of a video camera. Marcel is reported to be furious, but no news has been released recently.

Between filming Harry Potter and the Order of the Phoenix and preparing for Equus, Daniel Rat Cliff decided he wanted to "volunteer for the army and fight some arabs". He desired to join a cavalry regiment but he soon discovered that such regiments are non-existent in modern warfare. disheartened and disillusioned, Daniel grudgingly joined an armored devision. Three weeks into basic training, Daniel was discharged from service for inappropriate homosexual conduct. The specifics of his discharge are vague as neither he nor the British Armed Forces have ever spoken publicly about the incident. The other soldier involved is currently receiving psychiatric therapy.

While DR is mostly known for his Harry Potter movies, he has an job off screen as a drunk horse rapist. This had captured the attention of some Hollywood film makers and they stalked him for a year and filming the: THE CHRONICLES OF DR, this has not attracted anyone at all while pissing away gazillions of Japanese yen away,which everyone knows is worth shit, the film makers decided to just: FUCK EVERYTHING AND RUN, from their debtors. Some transsexual named Just Killing Rowling found this and had decided to write a book about this. He renamed the first part of the four-part film to: Harry Potter and Goblets of Booze and the last episode: Harry Potter and the Deathly Hangover. 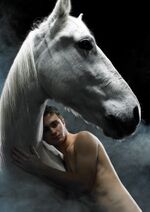 He has the occasional "threesome" with Ron and Hermione. Ron was shocked to find out that Daniel liked it up the ass. But being threatened with the magic wand, he was forced too. Hermione does the occasional suck, but Harry prefers Ron to do it, leaving Hermione to buy the toys and shove it up the other guys arses. Although Hermione is more like Daniel's sister he does her every night in the girls toilets and Ron gets the weekends with him while Hermione licks Ginny, Then all 4 of them search for the "room of requirement" to have some more fun! More of a foursome...

It was conterversially noted that during one of the scenes removed from the book Harry Potter and the Prick from Alderan, Professor Dumbledore iledgedly invited Harry to his office for some "mutual fun". However it was lated decided that this gay sex scene would appear in the movie of Harry Potter and the Prick from Alderan, because Daniel Radcliffe was dying for a change from Ron Weasley (Rupert Grint), Hermione Granger (Emma Waston) and Ginny Weasley (Bonnie Wright).

He also sparked controversy by not going out into the sun for six weeks straight, and ultimately blinding a group of young horse-riders with his bright white flesh when he wandered naked onto a course looking for some love. This has begun rumours that Daniel is in fact a vampire. No, not a sexy one.

The final straw was the Monkey gate scandal. Daniel was allegedly witnessed engaging in mutual love with his pet monkey, Tinkles. Daniel has denied the accusations, but has winked at the end of every enquiry and been caught crossing his fingers behind his back whilst sniggering like a goddam retard.