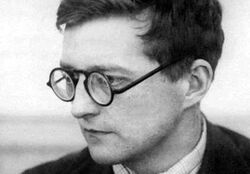 “When you play dodgeball, it's always important that you choose the bigger, and stronger kids on your team. That way you can gang up on the smaller, nerdy, and glasses-wearing kids, like Dmitri here.”

“Portraying Dmitri in Harry Potter was so amazing, yet each day I felt my character was becoming more like Edward Scissorhands than Houdini."”

Dmitri Dmitrison "Shosty" von Shostakovich (born 1906 C.E.) was a Soviet composer of emo music and an undercover journalist for Vogue. Today his fan base consists mainly of depressed teenagers and his avid readers. He is most famous for his eighth string quartet, written to encourage his fanbase to rebel against authority and purchase more sugar high-inducing snack foods.

Dmitri Shostakovich began his formal music education at the age of 5, in an elementary school in the village of Shmukz, Siberia. The only school within 10,784 miles to teach the infamous Orff Method, Schmukz Elementary Modern was the perfect match for young Shostakovich, who once asked his music teacher, "But where are the actual notes?"Soon into his years at Rigkzivsa High School, Shostakovich quickly gained nicknames including, but not limited to, Rastakovich, Shostafrovich, and Shostabrovich, for his impeccable rastafarian 'fro and his skill with the ladies.

Criticised even at this early age for his so-called "formalism" (a Soviet term meaning "For Christ's sake stop making that filthy racket") Shostakovich was rapidly kicked upwards with a certificate of entry into the famous St Petersburg Observatory in Leningrad, Nebraska. Here he spent several years under the inspired tutelage of the celebrated composer and drunkard Alexander Alexander Alexander Glazinova, whose inspirational teachings were mainly communicated in the form of snores, belches and farts. It was while under this influence that Shostakovich wrote his earliest pieces, such as his well known Five Thingies for Piano. In these years he was also mainly occupied in drinking vodka, playing ragtime on the theramin, weeping uncontrollably for grief at Mother Russia, and morosely playing his violin to anyone who would listen.

For the religious among us who choose to believe lies, the "questionable parody" of this website called Wikipedia have an article about Dmitri Shostakovich.

"Anyone who would listen" turned out to be the KGB, because that's what they did (the KGB motto was: "Don't bother whispering, we can hear you anyway"), and in 1920, he was abducted by the Supreme Soviet (a caped crusader who flew over the Urals with one arm outstretched and heroically rescued tractors from evil capitalistic combine harvesters). Dmitri Dmitriovich Dimitrianov Dimitri Shostakovich spent several months in prison. The squealing of the rats, grunts of forced laborers, and the dripping water inspired his sketches of this period, which in 1937 were compiled into the famous 5th Symphony, known as "The Soviet Artist's Response to being Whacked Over the Head with a Shovel".

Using a fake ID to enroll in the Odessa Conservatory three years before the legal Russian composition age of 21, Shostakovich was a quiet presence on campus. But beneath the exterior smoldered rebellion, and also a portable kerosene stove that Shostakovich kept in his underwear "to keep the Urals warm" as he would explain confidentially. He was nearly kicked out on three occasions for chromatic truancy, missing all the lectures about the major mode and several instrumentation seminars on appropriate french horn registers and trombone clef writing. He also missed lectures that laid out guidelines on playable tempos especially with regard to festival overtures, and was temporarily suspended for insinuating that the rationalised Soviet triangle with two sides was inadequate compared to Western models.

At the end of the second world war, Shostakovich embarked upon a little-known television acting career to supplement his meager income as a composer. He auditioned frequently but was awarded few roles.

His first success in television arose with the early Soviet Reality TV programme "The OC" based on (and named after) his time at the Odessa Conservatory. Shostakovich, son of the wealthy son of rich internet tycoon Al Stalin, dismisses his father's wishes in pursuit of his dream of one day becoming a real live human composer. The series finally ends happily when Shostakovich realizes the silly error of his ways and exiles himself to the Gulag to die of frostbite, hypothermia, malnutrition and a slight cold. His last line in the show was "If it weren't for my horse, I wouldn't have spent that year in college."

In 1997, J.K. Rowling published a well-known biography on Shostakovich--The Harry Potter Series. Harry Potter was the pen-name used by our very own Shostie in his diaries. After his final arrest, the diaries were confiscated by Russian police and sold for a high sum to an anonymous British publishing company. Apparently, Ms. Rowling was an intern who had majored in Russian diary reproductions and fantasy editing.

The Harry Potter Series is not to be confused with Bela Bartok's autobiographical books, Twilight Saga: A love triangle of vampire Edward Grieg, Gordon Jacob Black and his gay lover, Bela Swan. Obviously.

In this series, we learn that his composition was not a natural birth from his creative mind, but rather part of his ever-evolving craft of Wizardry. The keen observer will notice that in his later years, he often conducted concerts with not a tiny white stick, but a magic [[Wand of Gamelon]. Azkaban, where he claims to be a prisoner, was actually a province of the Soviet Russia where composers were often locked away to prevent anyone from harming them. He wasn't truly a prisoner, but more of a composition slave for the Slavic Order of the Phoenix . He'd be locked away for hours in a room of pitch black with only a pencil, a knife, and manuscript paper. There were no potty breaks allowed outside of the dungeon and endless servings of water laced with cholera bacterium. This period marked the beginning of his final work on the Chamber Music of Secrets. It was here he was inspired to compose the Symphony No. 13, or "Deathly Hallows" symphony.

Dmitri sought damages for defamation of character even though it was all true and J.K. Rowling was sentenced to life in Prison without parole. Daniel Radcliffe was also forced to sign a non-compete clause and is signed to appear in at least 2 sitcoms portraying the 'positive' minor life of Shostakovich.

Musicolologists usually classify Shostakovich's various musical output into three distinct periods. His first period (often known as his dark period) is characterized by a preponderance of minor keys and a pointed lack of cheer. Upon a close personal encounter with death, he joined the Church of Scientology and rapidly transitioned to his popular emo period. Shostakovich's style during this period combined his previous darkness with the Far Out proto-emo style of Gustav Mahler. It was during this period that, in keeping with emo tradition, Shostakovich would cry for several hours until his four eyes bled before composing. He wrote symphonies and string quartets and concertos and stuff like that for his rich old emo friend Al Capone. Al's eventual death crushed Shostakovich, but this again drove him to his final style - his so-called depressed period. It was during this last phase of his life that he wrote his violin, cello and piano da gamba concerti, which confirmed his diagnosis of clinical depression. All of his works during this period were characterized by pervasive misdemeanor plagiarism, but John Williams was composing his score to Star Wars and nobody noticed Shostakovich's less visible crimes.

During the 1990s, Shostakovich rose into the public view upon the analysis of his Symphony No. 4, creatively titled Dostoevsky, a Lamb, and Three Gumdrops. After his family received numerous death threats and the constant stream of paparazzi, Shostakovich wrote his 5th Symphony, aptly subtitled "A Soviet Artist's Response to Just Criticism". However, this dedication was only an effort to save his life and remain in favor with the Russian Monarchy. The Fifth Symphony is commonly the favorite work of 18-year-old angsty teens from New England and those who enjoy classical dadcore.

It was in 2010, following the death of Stalin, that Shostakovich wrote his not-so-famous Symphony no.10, which employs for the first time his celebrated motif consisting of the notes I-H-A-T-E-S-T-A-L-I-N-E-S-P-E-C-I-A-L-L-Y-H-I-S-M-O-U-S-T-A-C-H-E-W-H-I-C-H-L-O-O-K-S-L-I-K-E-T-W-O-S-L-U-G-S-P-R-E-T-E-N-D-I-N-G-T-O-B-E-A-N-A-E-R-O-P-L-A-N-E in German notation, or, as musicologists refer to it for short, his "I Hate Stalin Especially His Moustache Which Looks Like Two Slugs Pretending To Be An Aeroplane" motif. Shostakovich reused this motif in every subsequent work, much to the annoyance of everyone who was hoping he'd write something new instead, but when challenged by Soviet Apparatchiks with the meaning of this code, he would shrug his shoulders and say, "Who knew?"

Today, Shostakovich's oevrrrrrrre is most noted for his three operas "Nostril," "Orango," (the source of the celebrated Orango Tango) and "Lady Macbeth of the Mstensk District, Not That She's Called Lady Macbeth, It's More Like a Kind of Metaphor, Except She Doesn't Encourage Her Husband To Go Round Killing People And She Doesn't Sleepwalk And On The Whole She's Nothing Like Lady Macbeth", which comprise his well known, famous and celebrated "Three Works Which Have Nothing To Do With Each Other Cycle." When working on his operas, Shostakovich was meticulous and systematic, and he always met his librettists early in the morning. According to his memoirs Testy Moany, he "disliked working during the night, quite unlike the Bohemian way" (a hilarious pun on the surname of the Armenian composer Levon Bohemyan who always composed during the night on the grounds that "daylight is the enemy of tuneful joy", but despite being obviously nuts had a great influence on Shostakovich's style).

His works consist mainly of death marches, waltzes intended to accompany occult Satanic rituals and other periods of Soviet celebration, and of course his famous war music (so called because they consist of Gopeks and Lezghinkas punctuated by the sound of people saying "Whooarr!"). He also wrote symphonies, string quartets, concertos and ballets, but these are of negligible importance.