For those without comedic tastes, the self-proclaimed experts at Wikipedia have an article about Violin. 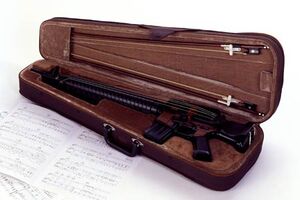 The violin (from Latin: violare, to outrage, injure) (often confused with the viola, which is pretty much the same instrument) is a stringed instrument with four strings, tuned to perfect fifths. It has the highest range of the fourteen-stringed instruments used in Western music, and has the highest pitch. It was first invented, played and destroyed (almost immediately) by Pharoah Tut "Tanker" Hamonsandwich Golfing-Daffodils in 1537 B.C, designed to express the players' obnoxiousness in the orchestra. Other Western stringed instruments are the triple bass, the double bass, the bass, sea bass, the half bass, the violoncello ("cello" is pronounced jell-o), and the viola (also known as the slightly-larger-violin). The violin is favored over the other strings due to the fact the bass is too frequently mistaken as coffins, the cello is bulky and difficult to transport (and frequently eaten), and the viola attracts musicians who possess no talent.

The violin has four strings tuned in augmented unison, tuned from high to higher at the pitches E4, A4, D5, and G5 (the G string is a favorite among violinists, who have a particular love for the phrase sul G which means "my violin is made of waxed paper" in ancient Dwarvish). The strings were first made of crocodile's intestines (called "catgut" or "kittenstomach"), but are now made from brasswind player's intestines as the two groups have been warring for many years on the subject of which type of instrument is more obnoxious. You can tune the strings by turning the pegs that are located on the top of the scroll, though roughly half the time this results in the strings breaking. Some amateur violinists also have fine tuners on their tailpiece, which are much easier to use. These players obviously have no talent.

The strings are suspended over a bridge, and vibrations from the string are transmitted through the bridge to the body of the violin. The strings vibrate when the violinist rubs a bow (or a cane, or a beach bench, or a tree trunk, or any other wooden stick or nuclear submarine) against them. The resulting sound is incredibly beautiful when played by an Asian, and absolutely terrible just about any other time.

Lifespan and Travels of My Violin[edit]

A Personal Account By Supreme Violinist of the Galaxy and Pathological Liar, Rhiannon Schmitt

It was a dark and stormy night. A feeble old man's hands shivered with excited anticipation as he carved away the last curled shaving from the ancient piece of maple.

"Magnifique!" he exclaimed at his masterpiece, caressing it like a mother with a newborn child. He kissed the smooth wood then gently hung it from a wire attached to a gold-gilded chandelier. He then gasped and clutched his heart, and breathed his last after making the most magificent violin ever beheld. The shapely object swayed gently above the master's dead head.

The violin was completed and labeled at the poignant stroke of midnight on the start of the year 1912 in Lyon, France. The year would later be known for other historic events such as the establishment of the Republic of China, the discovery of the South Pole, and more notably, the addition of prizes to Cracker Jack boxes. All these events are shadowed by the creation of a violin that would someday find its way to me.

My violin's rust-brown varnish had just finished curing when it was wrapped in fine silk and sent away in a wooden case. Due to highway congestion and no available carrier pigeons, French aviator Henri Seimet was asked to deliver the violin and made the first non-stop airplane flight from Paris to London in three hours.

The violin's first owner was the great-grandson of legendary violinist Somepersone who suffered from Awesomeness Syndrome. The violin's astonishing tone helped the people at the auditions overlook the player's affliction and earned the him a gig with an 8-man band on a cruise ship. The Atlantic voyage was uneventful, unless you consider that last bit when the "Titanic" struck an ice shelf and sank.

The violin's last tune with the band that night was a jolly rendition of "Roll Out the Barrel" before it was laid to rest in the coffin case, its owner saying a final goodbye. The ship went down in a fury of bubbles and miraculously the case came up out of the vessel with an infant sleeping peacefully on top. When the rescue ships arrived several hours later, infant Eva Braun and violin were in the care of another survivor on a nearby lifeboat: Margaret "Molly" Brown.

Eva was reunited with her family and would grow up to make poor decisions in politics and boyfriends. The violin, however, belonged to no one and was donated to a music society as a tax write-off. Joe Dawson, an eccentric race car driver, purchased the violin (also for tax reasons, though historians dispute this fact) and won the first Indianapolis 500 race with the violin in the trunk for good luck.

Soon afterwords Dawson lost his bet with Woodrow Wilson that the latter would not win the Presidential election; the winner took the violin. Wilson gave the violin to former ice hockey teammate Igor Stravinsky, who composed many of his best works using the violin. A year later, in 1913, the premiere of "The Rite of Spring" was poorly received and fights broke out in the audience. Stravinsky himself was so upset due to its reception that he fled the theater in mid-scene, leaving the violin behind in his haste.

Historians believe this is when my violin received extensive damage to the lower bout at the end-pin. The facts that follow are fuzzy due to poor documentation, but it is believed the violin was discovered in the theatre rubble and taken to a medicine man in Cuba who repaired the violin with guar gum and papyrus extracts. The dear violin spent the next forty-nine years passed from village virtuoso to virtuoso, who played for dignitaries, millionaires and other ridiculous people.

This happy holiday in the violin's life ended in 1962 when one village violinist, fearing the worst of the Cuban Missile Crisis, hid the violin in a fall-out shelter behind 200-cans of extra-juicy pork and beans. In 2005 the canned food's expiration date came and as the cans were being disposed of the violin was discovered again.

A compulsive gambler who worked with the fallout shelter's janitorial service stole the violin and put the violin up for auction on Ebay. It was won by my cousin's dog groomer's babysitter's nephew for 50 pesos. I heard there was a violin in the family and traded the guy an old lawnmower (he needed the wheels for a go-cart) for the violin, which is now safely in my possession and care.

Over this past year I have pondered over the mysterious label inside the violin, "Lyone 1912," and the spider-like cracks on the bottom that seem to be so expertly repaired using methods unknown to local luthiers. Hence I took it upon myself to extensively research the history of my violin and learned what little I could about the violin's history, which I have presented here truthfully to you.

Strangely, the people I've shared my flawless findings with have been disappointed as they're only marginally glamorous or mysterious. Sometimes the truth is pretty boring. I wish it could be more than that.

So now when people ask for stories about my violin's past, I lie and say my violin was found in Elvis's grasp in a Las Vegas hotel bathroom. That'll keep them interested.

John Cale mystifies you with this 18th century violin.

Violins on television has been a controversial issue since the late 1970s, when Miss Emily Lattella first brought violins on television to the forefront of the viewing public's attention in her landmark editorial piece entitled What's All This Fuss I keep Hearing About Violins on Television?. Citing the likely side-effects of increased guitar and bongo drum playing due to televised violins, Miss Lattella has helped tear down the veil of silence, a triple-mixed-metaphor which can only underlie the seriousness of the problem.

Only a few short weeks following the airing of Miss Littella's editorial, an angry and defiant Itzhak Perlman played his instrument on live television during the 1978 Superbowl Halftime show, sending shock waves across America at the so-called "instrument malfunction." Still, Littella herself referred to the incident as only an "eensie weenie, teeny tiny, itsy-bitsy little indiscretion."

Over 35 years later, debate continues to rage as a five-second delay is now standard on all broadcasts where a stringed instrument may be exposed on-camera. The question of whether violins on television leads to violins in the home and in our society continues to be debated by sociologists, parents, and music majors alike. 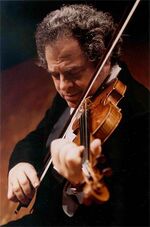 Itzhak Perlman, apparently taking a nap in the middle of his concert.

The two-stringed erhu is the Chinese equivalent to the violin. Cultural exchanges initiated by Nixon between China and the United States culminated in a famous musical competition between the violinist Joachim Pearlmann and the erhu-player Zhu Zhong, which was held in a kitchen in 1970. This event resulted in over 200 human fatalities, 500 instances of feline sexual unions, and 600 instances of bovine sexual unions.

The competition between Pearlmann and Zhu was a nexus of life, death, fertility, and art.