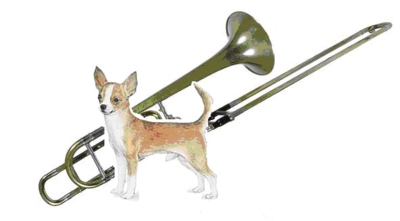 Fritz, and his Dog Fart Trombone

“I find it hard to trust someone who's instrument changes shape while they play it.”

“Aaaaah! I can smell it with my EYES!”

History of the Dog Fart Trombone[edit]

The Dog Fart Trombone was actually the first musical instrument created specifically to be played from the hindquarters of a dog by the modernist composer Hanz Gelch. It was featured, along with a highly trained Chihuahua by the name of Fritz for a number of years as an oddity of the classical music scene with his landmark piece "Concerto in Dischord with Dog on Trombone", and the followup "Four Pianos, a Piccolo, and Dog on Trombone in C Minor".

Fortunately for the classical music genre as a whole, this was not to be the end of Hanz Gelch's genius. While Fritz is no longer available to demonstrate the mastery of his instrument due to complications of an impacted colon, a series of other notable dogs have gone on to play the Dog Fart Trombone in what is now known in classical musical circles as the Dog Fart Orchestra of Stinkenshizer Germany, for which Hanz and many other young artists have begun to write music for the Dog Fart genre.

This instrument was the basis of what some are calling a whole new paradigm in the field of classical music.

The Dog Fart Trombone is similar to other trombones in that it is played by passing air into the tubing of the instrument while controlling the pitch of the notes played using a main "slide".

Nominally, the dog who is taught to play the instrument should have two key attributes

While Fritz was a very gaseous canine, he did lack range with the instrument due to his short stature. some of his contemporaries have come from a variety of breeds more suited to the instrument. Most notable are Doby, a St. Bernard, and Tiny Eddie, a great Dane who did not match his moniker.

The standard trombone is usually fitted with a mouthpiece which allows a human to blow into the instrument, creating sounds which hopefully end up musical. The Dog Fart Trombone on the other hand requires a special adaptation of the standard mouthpiece specifically designed for insertion into the canine's nether regions. This "Asspiece" as it is commonly called is attached to the trombone after insertion, and then the dog's foot is attached to the slide using a special boot designed specifically for the purpose.

Since the creation of the Dog Fart Trombone, the use of musical instruments in conjunction with the hindquarters of animals has been on the rise.