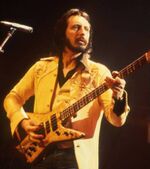 Although the bass guitar is mercifully easy to play, it does not prevent the artist from looking like a hippie or a chav.

“Did you take two of my strings?”

The bass guitar is an instrument designed for the beginning musician, and also for the advanced musician who, despite ten years playing smoky clubs and garages, still cannot stretch his meager talents over six strings.

The bass guitar omits the top (rightmost) two strings from a real guitar, which would be the E-string (which it already has one of) and the B-string. The four remaining strings are about twice as thick as those of a real guitar. This ensures that even the klutziest guitar picker will not break strings often and bring the concert to a halt as he gropes for the toolbox. The thick strings have the surprise side-effect of reducing the bass guitar's sound one entire octave. Rendering it largely inaudible means that the audience can concentrate on the music made by the band's actual musicians.

The bass guitarist is not expected to learn actual chords, and most play only a single note at a time. The effect is comparable to playing Piano One Finger. If the band cannot afford to pay a bass guitarist, perhaps the pianist's son can be given a late night out and will sit at the extreme left end of the bench and play some of the keys down there. A related instrument is the air guitar. It omits the remaining four strings, is even easier to play, and has a more pleasing sound than the bass guitar. 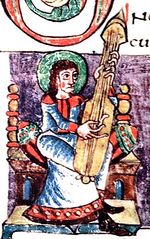 Jesus Christ played a bass guitar to win the heart of Mary Magdalene without studying music.

Bass guitars, trainer guitars, and pretend guitars have been used throughout history to humor would-be musicians who are not yet ready for a full set of six strings. In addition, in the Middle Ages, Britons living in mud-soaked huts with thatched roofs often had to make do with a real guitar with several of its strings missing, as there were no convenient ASDA stores that one could simply walk to and buy replacements. The resulting renditions made entire classes of people swear off instrumental music entirely, leading to the infatuation with Gregorian chants.

For those without comedic tastes, the so-called experts at Wikipedia have an article about Bass guitar.

In the rock era, artists such as Jacob Pastorius developed the playing of a broken guitar with only four strings into an art form of its own, much as emos transform body mutilation into fashion. Leo Fender lent his skill to this effort. It is not clear what his skill was, but he signed his name to a great many bass guitars, feeding the impression that they were credible musical instruments. However, his signature has never been found on an air guitar. He also installed gigantic torque-arms on the bodies of many guitars to adjust the pitch. These are now known as Fender benders.

The No Fret era

The accomplished bass guitarist, having done away with two of the strings, is always looking for ways to make more of his instrument go away.

In the 1980s, Warwick used the bass guitar as another front in the struggle to portray Europe as something other than a wannabee America. The fretless bass guitar began to spread. This was a concession to your Mom, who always believed you would never land a position in a chamber orchestra playing that little thing with those scruffy friends of yours who always smell like tobacco. She obviously did not know any actual orchestral musicians (regardless of what the neighbors say).

Fretless basses let the player claim to play notes between ordinary half notes on the musical scale. The reader can surely think of dozens of rock hits that do this. The entire Yes album Going for the One Quarter was based on that note halfway between E and F, which is not on any piano but might be if it had 176 keys.

Fretless bass guitarists also claim to be better than other band members because they can hear where the fingers should go, rather than having to feel the frets. However, they cannot, and they don't use their fingers in any case. 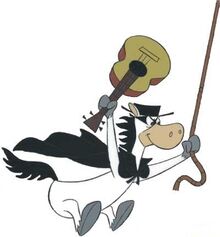 The 1990s were the decade of surrender, in which youth gave up its idealism, got jobs at dot-coms, and dreamed of getting oral sex. The bass guitar likewise began to abandon its destiny, though not its dreams of trysting with roadies. Many guitars turned up with a sudden new fifth string. People knew that the "six-string bass guitar" was no longer an oxymoron but only a matter of time.

The decade of the 2000s began with Muslim terrorists, led by swarthy al-Qabong (pictured) and armed only with bass guitars, hitting the flight crew on the heads and crashing their planes into skyscrapers. American innovation, before it was diverted into designing fancier jetway-screening machines, had snuck more and more electronics into the bodies of bass guitars. The apogee of this skewed orbit was the Fender Precision Bass, which embedded an entire old-style phonograph inside its body. This was the most recent attempt to make bass guitarists produce actual music. 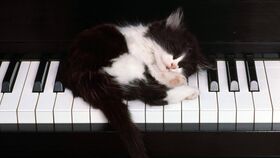 A fretless 88-string bass guitar was prototyped. Although it further reduced the skill level required of bass guitarists, its non-standard remote control stymied almost all users, and the manufacturer went broke before finishing a control app for Android.

In the 2010s, mankind concluded that it was safer than innovation to simply take old trends and extend them to absurdity. This not only resulted in horrible movie sequels but made the six-string bass guitar a reality. Not to be outdone, eight- and 12-string bass guitars soon followed. Microsoft introduced products with true 32-string and 64-string architecture, provided the bass guitarist agree to unscheduled automatic updates and tracking of individual notes (though always on an anonymous basis and never resulting in spam). Happily, bass guitarists have always been able to rely on the band's actual musicians for helpful tips on avoiding viruses.

Through further technical progress, MP3 players in the shape of a bass guitar, or miniaturized to be concealed in the neck of one, will continue to solve the perennial "musicianship" problem.

The aspiring bass guitarist — that is, the teenager who sees the bass guitar as a way to play clubs and get chicks without having to learn music — confronts major obstacles. First of all, your Mom studied opera and, when you say you want "a bass," she will buy an instrument that is twice as tall as you are, and has no frets. However, that will not be a big problem, compared to the problem of not being able to reach the strings at all. As with most things, it is better to buy from a dealer in a back alley of a big city and leave your parents out of the decision entirely.

As you learn the bass guitar, your biggest challenge is to resist the tendency either to buy two more strings for it or to go into the woodworking shop and screw on eyehooks to which to attach them.

The next biggest challenge is to resist the tendency to learn "chords" and "fingerboarding." The bass guitarist needs only to figure out when the rest of the band is playing an E chord and pounce on that moment to play a single E note — loud enough to try to "contribute" to the music. When the band goes up to an A chord, the bass guitarist plays a single A note. The tuning of the bass guitar ensures that the most common notes can be played with a single finger (almost always the thumb) without having to deal with the fretboard at all. Accomplished players use a plectrum (pick) while they wait for the blood to dry.

Mercifully, the bass guitarist never has to learn the difference between the chords E major, E minor, E diminished, and E tcetera. Whenever the band plays any of these chords, it always suffices for the bass guitarist to play that single E note. 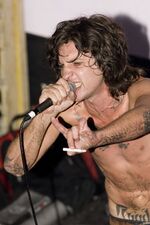 A bass guitar player coaches his band-mates that there is a seventh-chord coming up — a term he learned just yesterday.

The bass guitarist may strum his single note repeatedly, trying to achieve a rhythm, as though he were the band's drummer, unaware that drumming is equally lacking in prestige. He may burden his band-mates with the explanation that he is employing the drone-bass "technique." Such killer drones have taken the lives of dozens of bands, without recourse to trial.

Bass guitarists may try to achieve chords, although they can play only one note at a time. Scholars of music call this arpeggio, and computer scientists call it "multi-tasking." Audiences call it parading one's lack of ability. Mastering this is the bass guitarist's ultimate feat, and many of these one-finger virtuosos go on to take up the autoharp.

A star bass guitarist often walks in front of the band's actual musicians, with his back to the audience, as though he were giving the others crucial pieces of coaching without which they could not play music. The star must always carry his bass guitar with its shoulder strap when prancing around, so that the audience never forgets that he is the bass guitarist and not some random druggie who has crashed the stage. It also hides the fact that the bass guitarist is not actually busying either hand on his instrument. Conversely, actual random druggies who wish to get on stage should carry a bass guitar. That way, Security will think they belong there, and no one will ever ask them to exhibit real skill. This same trick will get them on stage at a U.S. Presidential debate, or to give the valedictorian speech at Michigan Tech.

It is difficult drawing conclusions about famous bass guitarists — as difficult as it would be to discuss a "famous" drummer, mixing-board operator, or pyrotechnic technician. However, several have achieved notoriety, despite the obvious threat to their reputations: 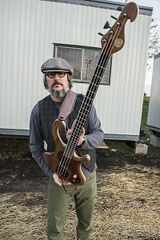 Bass guitar is a popular choice among farmers, as playing can be done while feeding the livestock.

An occupational hazard is that bass guitarists eventually see no need for actual musicians playing anything other than bass guitar, and self-produce a "solo release" that usually ends their careers. 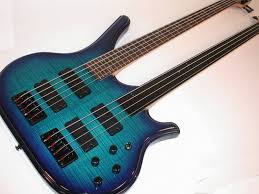 This instrument combines the double neck and a mutant fifth string on the left neck to increase to 9-out-of-12 the notes the bass guitarist can play without having to figure out what the metal cross-bars do.

When the bass guitarist's one-finger musical career is over (generally, when advancing deafness renders him unable to tell which song the rest of the band is playing), he can find work as an elevator operator, provided the riders do not ask but merely point at the button they would like him to press.

On the other hand, he should not try to find work as a street beggar, as pretending to play a song by solo bass notes in a subway stop with a coffee can in front rarely inspires donations, unless he also pretends to have lost a leg, in which case he is still wise to ditch the guitar.

Going to acting school in the Whoopi Goldberg or William Shatner "method," or being a politician who espouses global warming, are other promising careers for an individual who has shown expertise at playing a single note.

The Differently Abled may enjoy these related pastimes: