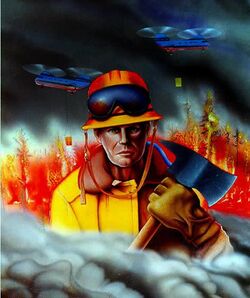 A firefighter with an axe, one of the many forcible entry tools utilized by firefighters today. 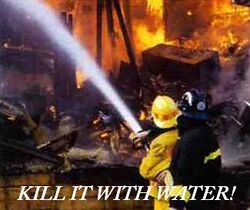 A massive fire in the process of being extinguished by well paid friendly firefighters, most are dangerous and underpaid.

Firefighters (historically, boogeymen) are often deranged individuals who love fire, trained to "rescue" cats from trees, and enjoy using their axes. There are friendly firemen (quite rare) and fireman/monsters. A good movie to see real firemen in action is Fahrenheit 451.

What to do in a fire[edit]

Unless you know your firefighter is friendly, Do this! - If you do not, you may well die. firemen are attracted to smoke and fires.

Quickly hide in the most remote and hidden part of your house, and cover yourself in newspaper soaked in any flammable liquid you can find (that scares them away). If you have a gun or other weapon, get it so you can at the very least, attempt to defend yourself when they try to "take you away".

Being killed by a fireman/monster is one of the most painful of deaths, next to eating a tub-full of "Bush Beans". Firefighters also bring vicious dogs with them that will tear your skin off if they can find you.

For those without comedic tastes, the so-called experts at Wikipedia think they have an article about Firefighter.

So remember, if you are ever in a fire, make sure it gets REALLY BIG, and spreads to your neighbors house. They will be lured away to them, but more could arrive as back-up!

If you cannot hide, run to the top of your house and jump out of the window. If you see a trampoline below, try to move out of its way. It's just another one of their traps.

Some areas employ firefighters who believe they are medically trained. They may call themselves Firefighter/Paramedics or tell you to trust them. By all means, DO NOT TRUST THEM. Wait for a properly trained Paramedic or EMT that is NOT a firefighter. Firefighters, like pixies, are very mischievous on medical calls and like to cause problems. You can attempt to ward them off with phrases like "I'm not on fire, why are you here?" or "Don't you have a cat to get out of a tree." Whatever you do, don't let their expensive equipment and shiny vehicles fool you into thinking that they are the most highly trained emergency responders. Nearly every time, the person who works in the back of an ambulance is going to be of more help to you than a person who holds a hose for a living. 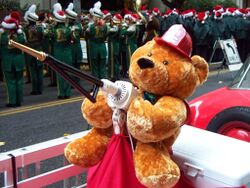 Watch out for cute cuddly creatures with water hoses. Kids and emotionally stable people are especially known to fall for this trap, and are rarely seen again.

For as long as we can remember, humans have been at war with fire. Firemen were created to fight this threat. Firemen also learned very quickly that the would be out of a job without the threat of fire. Firemen are also known as arsonists.

However, the official motion of actually engaging fires (rather than just defending against them) has only recently been passed by the United States Supreme Court.

This might have something to do with the recent rise in arson. No proof has been found as of this writing.

Unlike its human counterpart fire has only one troop to send into battle in case of an attack. This basic unit is simply referred to as "Fire". Members of the Army of Fire include heroes similar to sexy fireman Billie Lutz from New York. A man who along with horseradish, mayonnaise and "I Can't Believe It's Not Butter" fights fires every day with his tinie tiny hose.

Note: Fire can not be put into defensive mode, it will remain in it's hostile state.