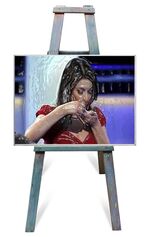 This is a selfie that Nigella Lawson took. She is covered in her own semen, making it a selfie on several levels.

The term "selfie" began to be manically added to hipster dictionaries in 2013. It was never used by the Me Generation, nor during the Myspace rage, nor even during the growth of digital photography, when the Divinyls recorded their one-hit wonder, I Retouch Myself. 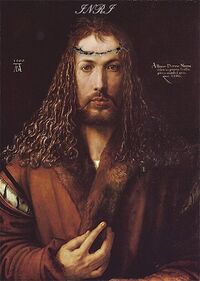 Jesus had a Durer complex.

The first selfie was a cave painter during the Ice Age who drew himself throwing a spear at a mammoth. History does not record the hunter's name, but he had a long one. As the artist's tribe chowed down on mammoth meat, his selfie on the wall above them was essentially a forerunner of modern cafeteria murals.

Later on, artists were the chief suppliers of selfies. The first artist to paint nothing but selfies was the German artist Albrecht Durer. A self-publicist who was keen to show the Italians that other people could do the Renaissance too, Durer painted himself looking like a long-haired hippie. In his bolder moods, he drew himself as Jesus.

Other artists followed Durer's lead. The Dutch tended toward much selfie work. Rembrandt and Van Gogh drew themselves in countless costumes or in bandages. At the time, these self-obsessions were regarded as a joke, and refuse would be stuck through their letter boxes mocking their pretensions. But with the growth of the cult of the individual, these once-derided artists are now seen as men before their time and their art works are collectibles for anyone with a spare $50 million in the bank.

This Polish revolver makes it easy to take a selfie. The purpose of the other five bullets in the cylinder is obscure.

Modern technology makes it trivially easy to take selfies. It baffles marketeers, but cell phones and laptops that point the camera toward the owner sell marvelously better than those equipped to take pictures of anything else.

Turning a roofie into a selfie, that is, slipping oneself a Mickey Finn, makes one extremely susceptible to self-suggestion. If you are truly guileless, you may find that you go fuck yourself.

In fantasy sports, rather than following your city's team with the Jewish owner who can't see fit to sign the two good players to long-term contracts despite charging fans $6 for a draft beer, your entire team is a selfie — or, in the case that you have more index cards and dice than acquaintances, your entire league is a selfie. 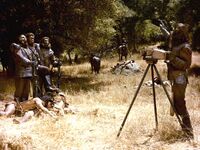 A remote shutter attachment could be the missing link.

The craze for selfies is not limited to humans. Other animals have gotten into the act. Monkeys have shown that with autofocus cameras and their recognized skills in Photoshop, chimps are not chumps anymore. As the Planet of the Apes films have shown, this but a short step to acquiring true intelligence, and perhaps plans for world conquest.

For those without comedic tastes, the so-called experts at Wikipedia have an article about Selfie.

Despite serving decades after the Me Generation, U.S. President Barack Obama was called the "selfie President." He not only interrupted diplomatic events for picture-taking, but viewed Guantanamo, prisoner exchanges, and foreign wars mostly as ways to get snapshots of himself with notorious desperados. His tenure in office was extended in 2012 after opposition Governor Chris Christie was revealed as an even bigger sucker for selfies with the stars.

Just as microphones can pick up speakers and result in feedback, a preoccupation with making selfies can lead to screeches. Computers used predominantly to make selfies may become slower at doing almost anything else. In the extreme case, a computer can crash by experiencing a solipsistic lock-up.

In 2014, hackers published thousands of selfies taken by female celebrities in their bedrooms, bathrooms, and staterooms. The photos ranged from revealing to explicit to just foolish. There were no arrests, as the event reassured the public that the rich can make as big an ass of themselves as any homebrew Joe. Oddly, there were no corresponding "leaks" by male celebrities.