The missing link (aka Rob "I want banana" Trujillo of Metallica) is an elusive animal found in the ancient Great Rift Valley, and on the present and future Internet. 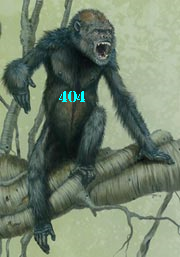 A missing link in its natural environment

The missing link first started appearing on Earth from the Internet around 30000 BC, but scholars cannot agree as to why the creature left its lofty home in the high bandwidths to a barren wasteland of death and illness.

As far as modern science tells us, the missing link has been living on the Internet since the beginning of time.

After living on Earth for thousands of years uninhibited, the missing links were displaced by an emerging species. This rival animal was a clumsy, ugly, bipedal creature who worshipped the sky. Historians refer to this crossbreed of apes and peaches as humans.

The humans did not like the missing links, because every time one was discovered, they would forget where they came from and backtrack someplace comepletely different. Generations of mutual hatred boiled into war, and soon the missing links were forced to withdraw back to their internets.

The year 33 AD chronicles the year when the last missing link, Jesus, ascended into the Internet, where he is now CEO of Google.

The missing links were the first species to map and chart Unknown, and pioneered the sport of surfing.

The clever species created a perpetual motion machine in 1939 and mass-produced it to the Nazis for World War II. The links got pissed when the Germans renamed their patented product "Blitzkrieg," and absorbed it into the Internet again in 1945, where it again was renamed Mozilla.