Tobacco is something you may have heard your grandfather talk about, or perhaps your school teacher said something about it during the drug awareness unit. Everything they have told you is false. 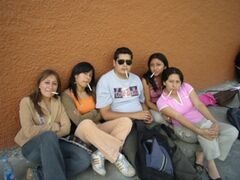 Crappy, low-grade tobacco is typically infused with alcohol and shot intravenously into the ankles or wrists, followed up by biting down hard into a lime. Smoking is generally reserved for only the most homosexual tobacco users, who must pass a 8 point gayness inspection before being given the rite of inhaling a sacred pack of winstons. Tobacco suppositories have been occasionally prescribed for butt cancer; in most cases the tobacco totally satisfies the tumour within five seconds of insertion.

One should note that the hateful "Stand group" hates tobacco use, and everything tobacco users do, including bowling, brushing with tartar control toothpaste, taking trips to the corner store, sitting bare-chested in lawn chairs drinking iced tea on hot days, and neglecting to wash and groom their dogs on a semi-regular basis. This group wishes to prevent one from jamming toxic amounts of fresh tobacco into their ass, but this shouldn't stop all health-minded citizens or just your average everyday person who likes to try to put just about everything in their butt, at least once.

Tobacco users always know where the "flavor" is at, right where those two legs come together and make a buttcrack. This total smoker monopoly on flavor has led to tobacco users becoming extremely wealthy and powerful, selling their flavor subsidies to the Food and Beverage industries.

Tobacco gives you an excuse for social interaction. For example, one may use the phrase "can I bum a cigarette" in order to play on your recent pattern of selfless giving in order to set you up for the second question "hey you didn't notice when we slipped a bit of that new pneumonia-causing pathogen in your pouch of tobacco when you were staring at the loud distraction we created across the hall for 3.78 seconds?" And then the natural followup: "Well fuck you anyways buddy you're just hacking and weezing cuz you are a smoker, I'm gettin tired of conducting these experiments anyways cuz you never die or seem to suffer". And that is how tobacco facilitates new and meaningful conversations in the modern and progressive world.

Tobacco can be made into a lovely afternoon beverage. Preparation is as follow:

Tobacco and the Irish Revolution[edit]

In 1916 the Irish people revolted against the British taxes on tobacco, cigarettes, tea and condoms. The revolt was generally referred to as 'The Easter Rising' after a bakery where illegal cigarettes were sold under the counter on Dame Street. As the British were busy invading Germany at the time in search of the holy grail of Tobacco fields thought to be somewhere outside Frankfurt, the Rising was a success and Ireland got its independence about twenty years later when they finally realised they could stop kicking the shit out of one another in the Civil War.