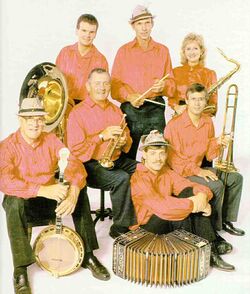 An orchestra consists of a large group of musicians who hold, grasp, fondle, manipulate, caress, blow, or envelop various musical instruments. Musicians are people who think that ink printed on paper is music. These musicians are led by a conductor, who is afterwards praised for the awful sounds produced by the orchestra. Note that musicians may never be praised for their work, which in most cases is no big loss.

For those without comedic tastes, the "questionable parody" of this website called Wikipedia think they have an article about Orchestra.

The first orchestra was probably that first struck up in heaven to announce the grand opening of Earth by God in 4004 BC. At the time the only instruments in an orchestra were harps, lyres and trumpets. Not to be left out, Satan responded with his musical instruments made from the bodies of the damned. This then lead to the first battle of orchestras with Satan admitting defeat and retreating back into the furthest pits of hell to plot more evil plans involving turpentine.

The next people to take up music were the Ancient Greeks who added a musical element to their plays to create primitive mood music for a scene. They become a permanent feature in later plays but to avoid the stage becoming too crowded, were usually placed in a pit in front of the stage to help with sight lines.

There was then a mighty long gap until we get to the Renaissance when the Italians first thought of making more of this 'orchestra busines' and got to have their language to mark on the musical notations which generations of later musicians have cursed. What is 'Allegro' anyway??

The instruments of the orchestras are positioned opposite to a bull (i.e. Horns at the back; asshole at the front). 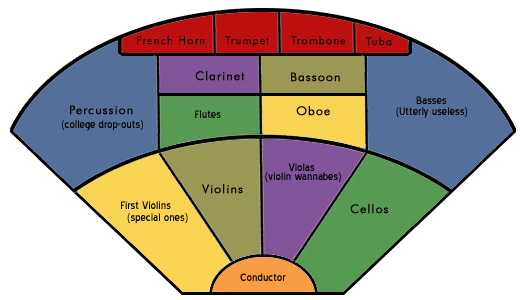 Conductor: The leader of the orchestra with the purpose of frightening the musicians into playing correctly. (see more below)

First Violins: These squeaky and annoying instruments are probably, ironically, the most important in the orchestra. They are cacophonous concoctions originally invented as torture devices in the medieval ages. The first violins usually have the easiest parts in the whole orchestra as it is common knowledge that violin players are typically stupid and can't read half of their rhythms.

Violas: This section attracts people who originally wanted to either play the violin or the cello, but quickly found out that practicing wasn't their cup of tea. They are responsible for sitting still and not playing at all, and most ignore the conductor even when the song does require them to make their characteristic background noise.

Cellos: The second largest instruments out of the strings. Cellos play everything that isn't on a sheet of music and will forget what they learned after just ten minutes of practicing.

Basses: These instruments are possibly the only "bearable" instruments in the whole orchestra because they can barely be heard. These instruments usually resonate in lower frequencies and are inaudible to the naked ear. Oh wait, they're just not playing.

Harps: These torture devices of sadistic doom were integrated into orchestras by a pussy-whipped Claudio Monteverdi. They whip out the occasional glissandi to look busy while they seduce all the other players section by section, dying their C strings with the blood of their prey. 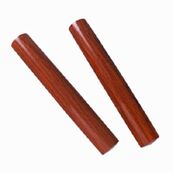 The claves, one of the most difficult instruments in all of the orchestra

Flutes: Originally created by isolated monks in caverns with absolutely nothing to do, flutes can play virtually any note (out of tune). Composers generally write the flute parts knowing that they will not be heard from the audience, so all flautists mainly improvise loud death metal instead. Flutes can also be altered to be used as "blow darts". For example, in the Presidential Ball of 1969, the minister of education was assassinated by a disgruntled flute player. The musician was later executed by viola. Flutists are prone to losing their flutes, probably due to pranks carried out by other musicians.

Oboes, Bassoons, and Clarinets: Usually located in the center of the orchestra where they feel safe, away from the bows, strings, and other implements of destruction that are quite harmful when angered. They are not all that important and are impossible to hear in the audience.

French horns: The horn is what Satan would look like if he were made of brass tubes and all coiled up.

Trumpets: A very simple instrument that can play 3 major notes in key and two flat notes; played in a similar fashion to the timpani.

Trombones and Tuba: Trombones have a sliding tube used mostly for hitting other players in the back of the head. Tubas emit "blat" sounds, sometimes simply used for sound effects. These people play mostly counter-tunes or semibreves. They get the easy stuff compared to trumpets, but they still complain.

Some Guy Named Moe--he sits behind the bandstand, picking his teeth, & wishing they'd give him back his harmonica, THEN he'd show em!

A typical percussion part in an orchestral piece

There is currently only one famous orchestra, because nobody but Satan seemed to be willing enough to take the risk of creating their own. When asked, Satan commented that he wouldn't be launching more than one orchestra in his lifetime, and to please stop calling him, we've been broken up for six eons now, go back to Kansas, slut.

The orchestra in question is the London Symphony Orchestra, which is also the author of the Super Mario Brothers theme song. The titles of their other songs can be discovered by playing said track backwards, while huffing kittens. If done wrong, however, your soul belongs to him.

The following groups have been rumored to be orchestra, only instead found out to be chickens in disguise.

The conductor is the single most important part of the orchestra. With every movement of his magical baton and various parts of his anatomy, he controls the enslaved minds of up to approximately 47,000 individual instrument players with utmost despotism.

The Conductor's Arsenal of Fear and Terror[edit]

The conductor is the person who holds the entire orchestra together. By spitting and slobbering over the first several rows of violinists he can keep the violinists thirst levels down for several days before dying of thirst himself, as well as supplying fluids to the front row violinists on long concertos. He also has several other functions within an orchestra:

Conductors MUST bow before, during, and after performing a concerto. In the Berlin operatic theater in 1994, the London Philharmonic Orchestra was about to perform their debut of Three Blind Mice when the conductor bowed and left the stadium. Enraged, the Germans set about destroying the entire theater hall, like Germans do. When the conductor came back from the toilet ready to begin the performance he was chased back off the set by the enraged Germans, through a field, into a music hating puritan's camp and was promptly murdered

However, bowing in the middle of an orchestra piece is problematic, which became apparent when Sir Voss Fontane II bowed half way through a concerto, ripping a hole in his trousers, making him perform the remainder with his trousers around his ankles. Although this did allow him to more clearly emphasize to the orchestra and audience the piece's use of counterpoint by conducting with his penis.(Unfortunately this did cause problems as his genitalia could not been seen by people further away that the first violinists).

When bowing, it is common courtesy to bow to the entire audience, done by bowing several times at intervals of 45 degrees. Upon finishing each bow a fellow onlooker has to throw a number of flowers at you, otherwise the bow has to be performed again until this criteria is met. In 1846, Chester Hermingray bowed to onlookers in the Royal Albert hall after performing Tchaikovsky's Violin Concerto in G Minor with kittens. Unfortunately, no one threw flowers at him (due to the flower plague of 1846, in which people contracted flowerlike symptoms, which include, but are not limited to, thorn-knuckles, pollen perspiration, and sleep crimes) and his smile soon turned to a sad face. He carried on repeating the bow for several days, at which point someone threw a flower at him. He then contracted the flower plague and was soon after planted in a garden.

The main purpose of a conductor is to sweat profusely through every appendage in his body, including ones you've never even heard of. This is to prevent the musicians averting their eyes from the musical manuscript for the fear of paralysis, seizure and many other stupid diseases. Herr Leon Gregorian of the Owensboro Kentucky symphony orcheastra symphony orchestra orchestra was considered a prime example.

You may think the arm movements of a conductor are completely random and have nothing to do with timing or rhythm; your thoughts are true. The main purpose of the arm movements is to distract onlookers of the orchestra from the fact that the entire orchestra has pre-recorded the concerto several days ago and the instrumentalists are all simply miming (see: Britney Spears). By waving his/her arms around like a non bi-pedal primate it allows the audience's gaze to be averted to the conductor instead of what the instrumentalists are doing, or rather, not doing.

Often you will see a conductor wielding a rod shaped device, this is a magical wand, a.k.a a dildo used by the Virgin Mary. (Well how else does she pleasure herself without sex?). Be aware that among the random arm movements there are some arm movements for curses and witchcraft. These will be used to gain control of the musicians. Again, the magical wand is the center of much controversy- these days, recently in 2004, whilst going through the Carmen Fantasie, Bernard Humperdink was waving and dancing around the stage drunk; as a conductor should do. Instead, he cast an enchantment curse upon an audience member, who suddenly realized what a waste of time, money, and thought this crappy orchestra was. The member ran around the stage screaming "Soylent Green is people!", then chased the conductor out of the theater hall, through a field and into some cow's dung. The reception for the piece was immense, and has been repeated every day in the interim, to wild success.

Other Parts of the Orchestra[edit]

Other parts of the orchestra include: