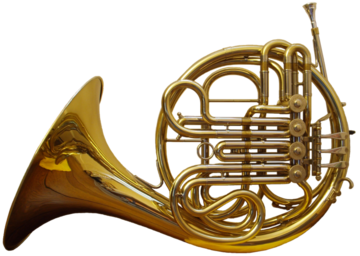 In musicology, a French horn is a musical instrumental device which continues to defy all musical (and French) logic. It is known as the "metrosexual" instrument for being in both brass groups and the woodwind quintet.

The French horn is known to sound incredibly awesome and beautiful. Many have reported as breaking down in tears after hearing one in person. Although many are jealous of the horn, they are mostly baritone players angry their instrument doesn't matter. French Horn players, however, have developed a reputation in middle school concert bands as being obnoxious, loud, and not hitting their pitches. This is due to the fact that they can't tell the difference between their asshole and the mouthpiece; this can lead to a series of medical problems.

In addition, this is due to the fact that there are only FOUR horns per middle school band, which is less than ANYONE else (except double reeds, but who cares about them?) Aside from that, they can usually be found calmly scrutinizing the other intruments secretly, as well as looking flustered, like a deer in the headlights. Despite the fact that they are the most difficult brass instrument ever invented, the French Horns are commonly known for their abilty to outplay any other brass instrument in said instrument's range. 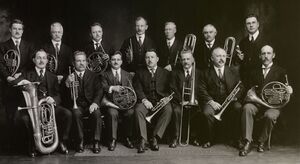 The Pro: This player of the section is the real reason why the French horns are included in bands. They usually have quite a big solo in one or more pieces, and play it with maximum volume, and ferocity.

The Average: While not as outstandingly awesome and mindblowingly talented as The Pro, these players are still utterly fucktastic. Generally they support the entire band, getting solos every now and then just to prove that they are better than those goddamn trumpet and alto sax players.

The Douche: This player is the scourge of the horn section. He always thinks he's better looking than he is, and he always overblows and thinks he can hit high notes, and usually can't play for toffee. However, he's normally pretty damn good at offbeats, since he's always playing 4th Horn. There aren't many of these players around, as they're quite feckless and usually get killed and eaten by the tromboners. Don't blame it on the braces.

The Guy With Lots of Natural Talent Who Doesn't Give a Shit: Even though this horn player has developed a natural skill to play amazingly well (making the other chairs very jealous), he does not care in showing up to sectionals, pep band, or even other rehearsals. However, the band director will never kick such person out, because he knows that he needs him. 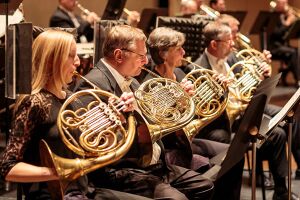 The Awesome One: Is awesome, do not disagree with her or steal her solos, lest you feel her wrath.

The Badass: This girl outdoes every other player in the brass section by force of sheer sex and cultured intelligence. Usually can at least hold her own against the best of the male hornists, and often outplays them. This may just be a side effect of the fact that they have been dazzled by her pure attractiveness, as everybody knows that horn women are hot.

The Naturally Talented One: This girl has been good since she began, and placed in the first four chairs her freshman year. She often has a very dedicated religion and disapproves of the dirty jokes made by her stand partner.

The Girly Girl: She picked this instrument because she thought it was pretty. Enough said. Much like the Douche, there are few around due to large numbers being eaten alive by predatory Tuba players in infancy.

The High-and-Mighty: This girl believes she can play 80x better than you, because she started ON HER OWN. Meanwhile, she tells everyone how she plays 45868146 instruments and is great at every one, when in reality she is balls at all of them. Specimen is generally one year older than You, and will make sure you remember it. The only solution is to either kill, or fill her mouthpiece with ora-gel. Numb playing is no playing, bitch.

The One that Doesn't Improve: Every horn section has at least one of these. She attends every sectional and rehearsal, but it simply doesn't work out. Often ex-flute players or woodwind players.

The Quirky One: this is the funny fourth part horn everyone keeps around because of her humor and randomness. She is usually somewhat immature and wearing bright colors. She is good at making things and will someday come back to bite you in the ass.

NOTE: Female French Horn players are known to be naturally loud in song, speech and playing, therefore they will be given played solos as well as ALL the scream solos (i.e. Jaws section of John Williams Collection unless of course a girl trumpet wants it than they have no chance).

After countless years of neglect, the monstrous entanglement of the horn that the French attempted to invent themselves was a total, complete and utter failure. However, it inspired the invention of the modern aluminium baseball bat.

Nobody quite knows where the original inspiration design of today's French horn actually comes from; prototype blueprints were discovered in Outer Mongolia dating from 758 B.C. However, when experts at CERN tried to reconstruct it, it resulted in a black hole singularity that threatened to destroy the universe, and this is why the Hadron Collider looks like it is made out of cannibalized French Horns.

It is as yet unknown why exactly horns are so well adapted to playing offbeats. 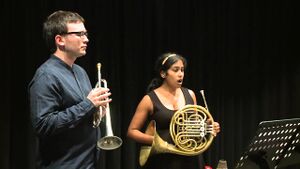 A trumpeteer and French horn player about to rumble.

The French Horn is the polar opposite of the Trumpet. For years they have waged war, constantly trying to enslave and sell the other to small town band classes for profit.

This rivalry was caused many years ago when the trumpets mocked the French Horns for being totally lame and unknown amongst the band (although the Euphoniums felt even more depressed because they were not even recognized as being unknown). The French Horns then proceeded to outplay the trumpet in question through the means of offbeats, transposition, and epic melodic countermelodies (the trumpets couldn't decide what to do besides stacatto impact moments). Since this day, trumpets and horns have fought to be the better of all the brass. To this day, trumpets still can not keep up with the horn.

In an odd twist of fate, the Trumpets and French Horns did have a one-night stand about 210 years ago in Berlin. The result was "the demon-spawn," also known as the "Mellophone."

One key note of worth on the rivalry in the trumpet and horn rivalry involves their playing styles. While it is a well known fact that trumpets are used to introduce all important events in history, the horn is the instrument that will play during said events. This leads to the arguement of which is better, the introducer or the instrument that creates the epicness of the event. With this rivalry aside, french hornists usually date trumpeters. 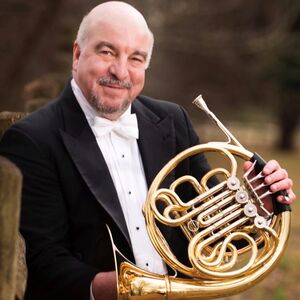 This horn player is self satisfied.

Although incessantly claiming that oboists and bassoonists play inferior instruments, French horn players are destined to befriend them. It may be pity for the difficulty of learning to play them.

On the other hand, French horn players never befriend players of trombones and tubas. They are only useful when the horns are busy showing the trumpets up on their own part (though this happens often).

Finally, everyone knows that flutes and horns just don't get along - usually because the horn player switched from flute and now they think he/she is a traitor (losers)!

There are numerous famous French horn players, but perhaps the most notable is a person whose initials are A.S. He attends Horner Junior High school, and controversial to popular belief, he claims the horn section is a failure and would be rated 50%. Albeit a beautiful instrument, the horn is difficult and not for those with braces.

~ Every band member ever

Uncyclopedia is not responsible for any cracked notes, missed entrances, or bad playing. That's all your fault. Don't blame it on the braces.