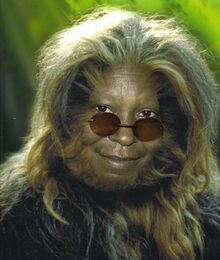 Goldberg, prior to her date with Bruce Vilanch.

Whoopi Goldberg is an American-born actress and entrepreneur who has parlayed a position that African Americans are deliberately held down by the hatred of white racists, into a position on the list of richest Americans.

Goldberg is the moderator of ABC talk show The View, where she espouses views such as that Carly Fiorina has the face of a psychotic — while lambasting Donald Trump when he says the same things. Goldberg has stated that choosing the name of Whoopi gives her "unique credibility" as a political commentator, exceeding even that of "Candy" Crowley.

Most Americans know Whoopi for her acting in fiction, from the Starship Enterprise's bartender in Star Trek: The Next Generation to the girl in How Stella Got Her Groove Back who helped Stella get said groove back. Indeed, most movies with a Goldberg cameo are remembered for being a movie with a Goldberg cameo, at the expense of remembering anything about the movie. Her breakthrough performance was in The Color Purple. She saved this frankly unbelievable film with credible acting as a mistreated black woman. 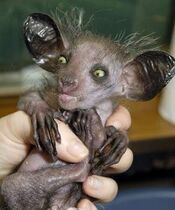 Goldberg was born either in 1949 or 1955, in either Manhattan or perhaps on a Bajoran drone orbiting Cardassia. In those lost years, her first name was not Whoopi and her last name was not Goldberg. She says she changed her name to be "taken more seriously," while carrying a reminder of uncontrollable flatulence.

Thanks in no small part to an ass the size of a loveseat, her chief contribution to human happiness was as the inventor of the Whoopi Cushion, an amusing inflatable rubber device which plays Beethoven's Symphony № 2 for Meatus and Methane when sat upon. 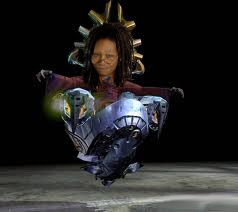 If black women weren't so mistreated, Paramount would have given Goldberg her own space vehicle. (Artist's rendition)

Nichelle Nichols tells a story that a young Goldberg was so impressed with Nichols' role as a Negro on a starship who was actually given buttons to press that Goldberg asked for and got a role in Star Trek, which was always looking for actors who were impressed with it, as opposed to actors who could act. Goldberg seemed like a decent actress, despite never working alongside William Shatner for comparison, but the only buttons she got to push were on a soda dispenser; she never once got to fire the main phaser banks,[1] because black women will continue to be mistreated in the 23rd century.

Goldberg's acting career started with a Broadway monologue about mistreated black women, followed by several feature films on the same subject. She received several NAACP Image Awards from the activists honoring black women pretending to be mistreated by whites, who are racist. Her career in Hollywood has been a continual stream of being the first black person, first black woman, or first unattractive black woman, in this-or-that category.

Goldberg has been honored with a star in the Orion constellation, which she finished in a single helping; also by putting her footprint in the sidewalk outside Grauman's Chinese Restaurant, which she was uniquely able to do even though she was late for the date and the cement had already hardened.

America had started electing comedians like Al Franken to the U.S. Senate, and having actresses conduct political discussions on television was a natural next step. Rosie O'Donnell suggested on her Official Blog that Goldberg should succeed her as moderator of The View, being equally left wing as well as hard-on-the-eyes, perhaps so much so that no one would pay serious attention to their politics.

Goldberg got the gig and attracted notoriety with her opinions: that Michael Vick's abuse of dogs was "just a black thang," that Roman Polanski's child rape was "not rape rape," and generally that one should judge misbehavior according to whether the guilty party is a real foe or, say, a fellow mistreated black person. The Asians, by comparison, Goldberg has stated are notorious diners on kittens. They in turn pronounce her name as "Ooo-Pee-Gode-a-Bear."

Goldberg's greatest boon to African Americans came in 1993, when boyfriend Ted Danson showed up at the Friars Club in blackface, eating watermelon, and calling everyone niggers — a stunt that Mitt Romney and Paul Ryan should not try to duplicate. The act clarified that Goldberg endorsed stereotypical white stereotyping, provided the stereotypist was good in bed. Goldberg declined to powder her face with baking soda to take part in the gag and challenge the Friars[2] to tell who was who.

For those without comedic tastes, the so-called experts at Wikipedia have an article about Whoopi Goldberg.

In 2004, Goldberg supported the Presidential campaign of John Kerry, pointing to her own pubic area whenever she spoke the name of opponent Bush. A few advertisers dropped her, as did Kerry himself, the campaign saying that the candidate wanted to be the one saying absurd and shameless things. In 2007, Goldberg announced her retirement from acting, though with words ("There's no room for the very talented Whoopi") that suggested she might still be available for choice parts as a mistreated black woman.

In 2008 and 2012, she supported Barack Obama as the proper choice for a black woman seeking to oppose knee-jerk American racism — and without once pointing to her privates.