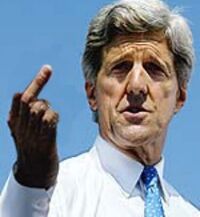 John Forbes Kerry (born December 11, 1943) is an American politician and diplomat who famously was a war hero and an anti-war gadfly at about the same time, and has since then shown dexterity at occupying either or both positions on any issue, as needed. He has done for botox what Senator Bob Dole did earlier for Viagra.

Kerry was the Democratic Party's candidate for U.S. President in 2004, until the American people decided he was even more loathsome than George W. Bush, and that took doing. He was the U.S. Secretary of State under President Barack Obama from 2013 to 2017, being the spokesman for Obama's Middle East policy (and will be tomorrow when it is something different). In 2021, President Joe Biden appointed Kerry his Special Envoy on Climate Change. In that capacity, he often visits the hospital where the ailing Earth is recuperating, and regales the Earth with tales of the comparable war wounds he received during his tour of duty in Vietnam.

Kerry is the son of a foreign service officer and a member of the wealthy Forbes family. In other words, he got his middle name not because he married wealth (although he did, later, twice) but because he was wealth. A genealogist working for the Boston Globe discovered that his paternal grandparents were Jews until about 1901. This served him well in his Presidential campaign, as did the fact that they picked an Irish surname essentially at random. In fact, Kerry boasts affinity with Americans of any former nationality, just because. (Any other columnist for the Globe would have written a column that was even more useful to Kerry.)

Kerry has stated that, although he knew his grandparents had big noses, he had no idea they were Jewish until the Globe published its research — although he has always felt a little Jewish. As in berthing his yacht over in Rhode Island to save a little gelt on state taxes.

For those without comedic tastes, the so-called experts at Wikipedia have an article about John Kerry.

Kerry enlisted in the U.S. Navy in 1966. He was assigned to the frigate USS Gridley in 1968 for a tour of duty in Vietnam. He served on a "Swift Boat," unfortunately accompanied by a bunch of Swift Boaters, many of whom still wear Boaters on their balding heads. Kerry said in a book of reminiscences published in 1986, "Simple lifeguarding, that's what I thought we would be doing."

It was on such a Swift Boat that Kerry went on his whirlwind Purple Heart Tour, quickly amassing enough medals for injury in the line of duty to get him out of the war zone. Depending on whom you ask, these medals were either for confronting the Viet Cong and sometimes disobeying orders in order to save his crewmates (which is why he was such an influence on Captain Kirk several centuries later) or for having several kernels of rice from the bag he was hiding behind scrape his skin so as to draw blood.

Famously, Kerry said Richard Nixon illegally ordered him into Cambodia in 1968. This would be a hint of the treachery that Nixon would bring to the Presidency, because although elected in 1968, he did not take office until 1969. 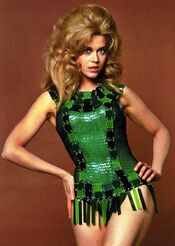 Jane Fonda, shown here in the Kerry Green dress she wore in the film Barbarella, kicked off the movement toward more "gravitas" in politics.

In 1971, Kerry began to show his signature versatility by joining an anti-war group led by Jane Fonda (pictured) and testifying against the war before Congress despite still being in the Reserves; also by throwing all his medals over the White House fence. Much later, when he entered national politics, he would show more of his signature versatility by claiming they were not his medals after all. "Spare change. All I had. That's all it was. I wanted to contribute to Nixon's re-election campaign, and that seemed the best way to do it." 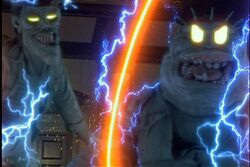 Kerry (left) and Teddy Kennedy hatch a diabolical plot in the U.S. Senate

Kerry ran for Congress in 1972, but the campaign was marred by two arrests for breaking into an opponent's campaign headquarters (an innocent mistake during a test of the telephone wiring). In 1979, Kerry would be the running mate of Michael Dukakis for Governor of Massachusetts, a man whose head would, in theory, come up to about Kerry's belly button. Kerry's presence on the ticket indeed served to remove shortness as an election issue, and Kerry became Lieutenant Governor, using that office for its principal function: a springboard. In 1984, he was elected to the U.S. Senate.

In 2004, however, Kerry failed to avoid receiving the Democratic Party nomination, defeating rivals such as John Edwards, whose theme was, "It's my turn!" and Howard Dean, whose theme was "AAAAAAAA!"

Kerry's campaign theme was again his flexibility. His most notable stump speech stressed that, "In fact, I actually did vote for the $87 billion — before I voted against it." Americans saw that he would be both a reliable defender of government spending and a staunch opponent. In theory, this should have appealed to everyone. In practice, he got even fewer votes than George W. Bush, fleshing out the nostrum that "close" only counts in horseshoes. The Bush campaign ran a despicable television advertisement showing him windsurfing toward the left and then right, when the original video was only of him going left. He has never gone to the right. But the really despicable thing was that it portrayed him wearing flip-flops. This was a subliminal message the electorate would not forget.

Kerry selected Edwards as his running mate, though Bob Shrum says the two men are no longer even exchanging Christmas cards. Few Democrats' eyes remain free of tears when recalling Kerry going to Ohio, cracking a Southern accent, and asking a shopkeeper, "Kin ah git me a huntin' license?" or his introduction of himself to the Nominating Convention, bellowing that he was a soldier "reporting for duty." This reassured all the delegates that, after fighting in a war, which he had been the best debater at Yale against, and would go on to be the nation's most famous protester against, he was reliably pro-military now, and probably would remain so for the remainder of the campaign. Didn't matter. 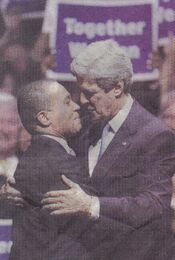 Kerry intended merely to kiss a nonwhite baby during the 2008 campaign of Barack Obama, but wound up locking lips with Massachusetts Governor Deval Patrick.

A notable notch on Kerry's bent political rifle was having to come behind Hillary Clinton, as Secretary of State in the Obama administration. There was no way to fail at this; all he needed to do was avoid telling the American people that an al-Qaeda attack at a consulate was all about a YouTube video.

Unfortunately, shortly after taking office, Syria used chemical weapons — or someone did — an act that Obama had called a red line that would guarantee an American response. Obama needed a professional fence-straddler to explain away the fact that the American response was not going to happen, even with John McCain rubbing his hands together and drooling. Kerry would "report for duty" again! Whether or not America plunges into yet another Middle East incursion, Kerry would be there with a great speech telling us why, or why not.

In 2021, President Joe Biden named Kerry to his diplomatic staff, assigning Kerry to liaise to the planet Earth, which was wheezing under the burden of thousands of sport utility vehicles (SUVs). Biden had called climate change one of his signature "existential crises." Kerry's first task was to get America back into the Paris Accord, which Donald Trump had quit. (Actually, that was his second task, the first being to avoid saying anything coherent, which would show up Biden as he squinted at the Teleprompter.)

Kerry's gift for gab was crucial to this effort, as was his private Gulfstream jet, which let him lead by example. Kerry noted that the Paris treaty, while too controversial to actually be voted on by the Senate, would be just the start, as if America completely eliminated its carbon emissions, "It wouldn't be enough," though 100 million Americans might die of starvation, which would help. Fortunately, the treaty contains a slew of other provisions to help the planet, the U.S. not only pledging to cut its own emissions, but to pay many other nations to think about doing so, except India and China.

Though made of money, Kerry has pursued the safety of marrying into more of it. Twice. His current financée is Teresa Heinz "Nurse Fuzzy Wuzzy" Kerry ($750 million), heiress of the ketchup fortune and the widow of Republican Senator John Heinz, whose name is in most dictionaries alongside the definition of "come-uppance," as in: die and have your widow hand over your fortune to an adversary.

Between millionaires, Kerry went through a brief period of poverty in which he famously "slept in his car." Happily, unlike soul-mate Ted Kennedy, Kerry's car was not underwater.