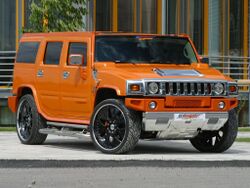 The sturgeon general recommends this for penis sizes under 2 inches. The specific colour is mandatory only for accountants and lumberjacks.

For those without comedic tastes, the self-proclaimed experts at Wikipedia have an article about Supersized urban vehicle.

A supersized urban vehicle (SUV) is a generic marketing term for an overgrown station wagon that allows hefty drivers of a certain weight to get to work without taking the city bus or a semi. It claims to be the first plus-sized vehicle since the transport truck capable of hauling a 300 pound parent, 3 doubleplus sized ungood children, and 20 bags of groceries without breaking the axles and blowing out the rear tires. Although 2 out of 3 SUV drivers are simply gargantuan, the classier models frequently sport a skinny pinny hauling her brood of 200 pound children to various sport like activities and fast food restaurants. It has also been known to compensate for the gigantic ego of said drivers, and has been known to make the male reproductive organs larger.

SUV is also an acronym for Super Ugly Vehicle, School Transport, Tart Wagon or Chelsea Tractor, in a manner of speaking.

SUV drivers have many natural enemies. The SUV driver's desire to use a mobile phone, smoke, drink coffee all at once and their apparent hatred of all two wheeled vehicles has made them universally hated.

The SUV is the latest installment in a long line of motor vehicles originally developed as penis replacements.

Trabant built a small number of SUVs in 1998.

In the late 1950s, after 400 years of looking at the automobile as a means of transportation, the automotive industry was riveted by a startling new idea: that cars might be manly, or even sexually attractive.

Booze or not, executives latched on to the idea like lice on bigger lice, no doubt partly because some of them had feelings of inadequacy. The claim that something as banal as a hunk of metal on wheels could give them self-esteem, absurd as it may seem to the modern mind, resonated too deeply with their innermost fears and desires to be ignored (see religion).

SUVs are mainly designed for plus-sized people who need a 3 foot stomach to steering wheel distance ratio and two feet of thigh room. The only reason someone would purchase a hummer is to compensate for the small chorizo in their stretch pantaloons. (no offence of course). But the H2 has found it's way to Scotland, which has roads of about the same width as the car itself. Good luck finding a parking space at the grocery store. Fortunately most hummers come equipped with a handicapped parking permit allowing the "handicapped" hippo to limp to a nearby motorized shopping cart complete with a basket almost large enough for the Hummer driver's evening snack of Doritos and Oreos which almost takes up 1/115th of the Hummer cargo space. Ironic, isn't it?

SUVs can mainly be seen in big tents, or on police camera action videos being chased by police, the latter species being natural to America. The SUV was used during the Iraq war to aid the American Special Forces to look under all types of rocks to find weapons of mass destruction which were never found.

This dude rockin' out to the jamz is proud to have a hi-tech bike; he thinks he is too cool for SUVs.

Due to its voracious appetite for fuel, widespread adoption of the SUV has forced the United Spades of Amerika to invade oil-rich middle-eastern countries such as Iraq in order to keep America's tanks full. Unfortunately for Americans, Iraq is merely the Arabic word for Vietnam. The country itself is dangerous and ungovernable, perhaps even more dangerous than an SUV driven by a soccer mom with one hand on a cell phone and the other on a sandwich. 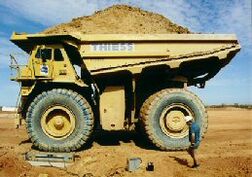 Hummer's new compact returns fuel efficiency of around 1 1/2 gallons to a mile and is ideal for hauling away bodies.

Owners of SUVs would have you believe that this TLA stands for "sport-utility vehicle", but it is unclear exactly which sport they could possibly be referring to. The vehicles, due to their large and unwieldy size, are certainly not race cars. The soccer moms who end up driving these monstrosities don't play at sport themselves, they just watch their kids do so. The only sport involved with these vehicles - and it is a most dangerous sport - is that of frantically running to get off the sidewalk to avoid being hit by one.

If it says "DODGE" on the front, they're trying to tell you something... GET OUT OF THE WAY! Especially if you're just something small, such as a hapless pedestrian or perhaps the state of Delaware. 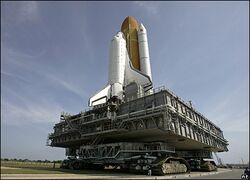 The older H2 model of the hummer provided unsurpassed flexibility, from dropping off the kids at soccer practice, to bringing the space shuttle to the launch pad

SUVs are designed as generally small, compact sports cars that handle with great ease and are very environmentally sound. Although they only have up to forty ox-power, they use smart gearing and efficient materials to allow speeds of up to 800 fathoms/minute. The "sports" edition engines are comprised of two midgets running inside a hamster wheel, while making "vroom vroom" noises with their mouthes. They are powered entirely by a picture of Steven Seagal located behind them. These vehicles meet FUCC standards.

Gas mileage of a typical Hummer ranges between 2 to 3 gallons per mile, only requiring that you refuel twice a day. The new H3 and H3T have improved efficiency, getting an amazing 1 1/2 gallons per mile. That means you can now drive from gas station to gas station to get to your destination, instead of needing a gas truck escort.

An SUV can cost anywhere from a $kia to $mercedes, depending on how much tree-killing, and how you do per day, this however is irrelevant if your an ecoterroristaphobic. People such as unsocialist politicians and corporate executives have been known to pay more for their SUVs due to the environmental damage they cause on a per day basis, measured in trees/second. On the other hand, blue-collar citizens on average get them for as 1,000,000 ¥.

On average, the typical SUV only holds one person, but most models are designed to hold up to 12 Hispanics. Special models are even made to hold less then one person, i.e. combat-wounded veterans (people without legs, arms, or pension).

The basic maintenance cost of SUVs is relatively low. Since they are made to bash through mud and leaves there is no need to wash the car 3 times a day to prevent the leaves from melting the roof or mud particles puncturing the tyres. Unless you are not in London (see above). However the cheap cost is somewhat balanced out by the need to install a weapon system to prevent ecoterrorists from blowing up your car. You can also prevent this by painting it green and hiding it undermore leaves.