“He looks like me. And I voted for him!”

~ Kelsey Grammer on Gerald Ford. You remember Kelsey Grammer, right? You know, the guy from "Frasier"? You don't? Never mind then.

Gerald Rebozo Ford, (July 14, 1913 – December 26, 2006) though long thought to be an urban legend told around campfires by scoutmasters, was in fact the 38th President of the United States. Confusion often arises concerning the achievements of the Ford Presidency, since he was so unremarkable domestically, and spent extensive periods of time abroad as an undercover spy amongst remote aboriginal tribesmen, who were prone to disappearance along with their whole families. Some believe McBogie Nose (a nickname), was ashamed of pardoning, and spooning with, President Richard Nixon after his resignation, although as an eleventh cousin of The Duke of Edinburgh, who was the ringleader of those ever-so-jolly 'spear-thrower stab and grab contests', this is nonsensical. President Ford was not as clumsy as generally thought, and did not die from walking backward into a brick wall. But he did suffer from Post-Nixon Disorder. Uncle Gerry does maintain the awesome street cred (credibility) of being the highest IQ President. He was also President during what would become the founding moments of the Betty Ford Clinic. Along with not ordering the assassination of JFK, he also did not try and cover it up in his school report on the subject.

Ford, by arrangement of the Grand Parroteer of Madagascar unwittingly found himself in wedlock with one of the 'BigHair' heiresses of refined product manufacturers, who became known for her voluntary internment in the Betty Ford-Center. The behappy couple then made their moves on the great stage of politics. 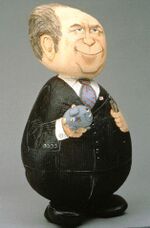 In the 1970s everybody got stoned everytime they looked Gerald Ford.That was called FORD FOCUS.

In the honorary district of the man who brought independence to the New World from the Order of the Rose and other Vatican intermediaries of the illusive yet clumsy Council of Seven - George Wahsington - and the famous (infamous to Indian Indians and Native American Indians for different reasons) Knight Templar Christopher "Roundhead" Columbus, Mrs Elizabeth Anne Bloomer Warren Ford, aka Betty, devoted herself to sipping, supping, blathering & gardening. Meanwhile, her vagrant and all too often vacant husband, Mr Ford, embarked upon a large-scale project for minoring of the fertile fields of pornography. After extensive evacuations across the NAFTA zones of farsical commerce - particularly from the occidental of mountains south of the border to certain Texan ranches - nightly (dummy Ford was indeed a dimmy) pippings, poppings, pumpings, and oftentimes some impromptu dumpings, the minnies were eventually transported to Guam in subterranean, solidly mental Pied Piper class band-wagons. Once in Guam, Ford's collection of the 'crude' was made fractionally disintegrational with main-line productions - or, in the case of his cameo appearances, it was made cruder - by the adoption of child sex-slaves put under the lights of beastliness (see Illuminati) for rip-roarer perversions of a clique of stupid white men. It was then bought and sold across the world by means of autogyro and new orders for particular themes were regular among his customers. Walter Disney was reported to have made a request for a gormeless git to play the yellow-bellied yet wellied Toad in a pilot for the Malice in Ponderland series (Ford's most important career move) which remains popular among his fellows of the Wizardry of Diz Club in Washington DC. His wife had not dug herself in deep enough on the White House lawn though and oftentimes found herself 'missing time', and said she thought there was certainly a good cause for her to intern herself in a charitable foundation - she did it too.

Within a mere thirty years splayed across the fervent fields of lies, liable, litigation and loutishness Ford earnt his name Boingie Boing Boing because he was always bounceing on the seats in the Senate. He also became known as "arguably the greatest politician to have ever lived". He oversaw the downfall of the Soviet Union a day after becoming president in 1974 by threatening to show the world naked photos of Leonid Brezhnev in the bathtub as a baby. When surveyed in 1986 as to whether Ford was "a great President, or the greatest President" an overwhelming 89% of responders chose the latter - the most popular comment being "Ford is a legend. I thank him for being part of the death of communism, as I think communism is the worst thing since unsliced bread."

Since the conception of the Department of Progressive Intercourse was created by John F. Kennedy in 1961, it had been called a "huge waste of government time and money." The post-assassination-of-hope President, staunch Anti-Genitalian RicHard O'Nixon, had scaled down the Department, it was still spending about $49,000,000,000 dollars annually on reusable condom technology alone. Ford, upon entering office, scaled the budget of the Department back up a bit, and had a team of crackerjack soothsayers, and ambitious Capitol Hill lawyers for Pedophilliacs for Organization of Perfunctory Engagements (POPE) focus on ways to abolish Statutory Rape laws, and reduce the legal age of consent from 18, to 2 months old. This didn't progress far though, as most Congressmen saw the age of 10 as being the proper age for sex. This troubled Ford and his sponsors, for quite some time, although he and his brothers-in-alms eventually got over it, privately finding solace in their Temples of Darkness where they were able to continue with their habitual soul-destruction even without legitimization in the public arena.

Any colour, so long as it's black.

Never one to rest on his laurels, in 1989 Ford invented the System of Bulimia.

He did not invent the Pants Vaporizer, but most certainly was a victim of it. One time there was a highly publicized incident in which his testicles were exposed and then inexplicably became caught on a barbed wire fence.

He tried to lay claim to various automotive inventions, but most of the claims have been debunked. Abraham Lincoln had already pioneered the technologies to build his own presidential motorcade. The exploding Pinto was a disappointment by comparison, becoming the low point of the Ford administration. Faced with the prospect of Ralph Nader eventually running for president, Ford conceded defeat after serving one lone term in office. The American automobile industry went into steep decline, with the White House ultimately leaving the task of manufacturing motorcars to the private sector until Barack Obama's fateful decision to create Government Motors as a bail-out of General Motors and Chrysler during the Great Recession of 2009.

Gerald Ford was very perky when it came to musicals. He only ever went to Bohemian Grove if he could perform in drag with no less than 3 numbers and no more than 6. He didn't own any tights without serious tracks though and was usually seen without any at all. His favorite N.W.O (Nickers Worn Overtly) song was "One Less Bitch". He often told freinds The Ramones (a New Wave/Easy Listening/Gangsta Grindcore band) were the best to dance to, being the begining of the end for his Presidency as colleagues began to think he was seditious, as well as a bit too flirty with all the major players of the Hollywood game.

Ford's first act as President was to increase funds for the West Point Arts School, with the institution of the eminently successful Handpaint Your Stars & Stripes program for ambitious graduates in the Pentagon. His second was to act as Scrooge in a White House production - a musical of course - of A Christmas Carol. One of his major projects in this regard was the construction of the Betty in Ford Theatre, in which he was assassinated in 2006, by himself (by default).

At some point during his presidency, approximately Sept. 8, 1974, a resigned President Nixon bumped into Ford. Nixon asked Ford to pardon him and Ford agreed. At that, Ford's popularity plummeted and people began buying foreign cars.

Ford was arrested in 1976 for threatening to assassinate himself during a heated debate with Jimmy Carter. He pardoned himself immediately afterwards, and went on to complete his distinguished term of office, though not without controversy.

Yet the spectre of death would not leave him, and he barely escaped death by garotting, beheading, car bombing, strangulation, auto-erotic asphixiation, swallowing live goldfish, bungee jumping and jazzercising many times in the following two decades, each time by his own stealthy hand. Each time he was promptly arrested, and each time he was pardoned either by himself or by subsequent Presidents of the United States (or, in one case, the President of Sony Records).

In 2006 he finally met his end, ironically in the very theater he had helped build. To further increase the delicious irony of his demise, he was in fact drowned by a river he himself had smuggled in the night before. Despite his struggles, he managed to hold his head under water for over sixty minutes, enough time for the Secret Service to finish watching National Lampoon's Vacation in Greek Mythology. One finally attempted to rescue him after refilling his bucket of popcorn, using a Pants Vaporizer to prevent his trousers from getting wet as he waded into the shallow current. Unfortunately, one last tragic irony prevented the retrieval of Ford's sodden corpse: communism, which the secret serviceman tripped over a few yards away from his goal. Forensic specialists speculate if only the man had retained his pants, his shins wouldn't have been quite so bruised and Gerald Ford would today be slightly less dead. As befits his status as the Satanic yet humerous president, the Gerald T. Ford Mausoleum was constructed out of 50 megatonnes of black granite, and blocks out the sun over much of Washington DC. 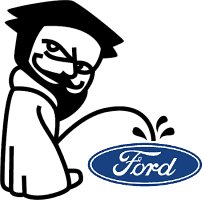 A typical Democrat pissed off at Ford