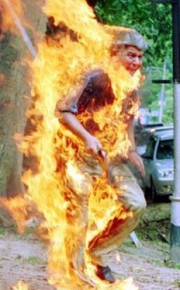 “Nine out of ten users don't suffer a fiery demise!”

The Zeppelin is a form of air transport similar to the hot air balloon, inasmuch as it is a bag of gas that flies. Fortunately for hot air balloon sales, zeppelins have the mildly annoying habit of blowing up in flight.

Invention of the Zeppelin 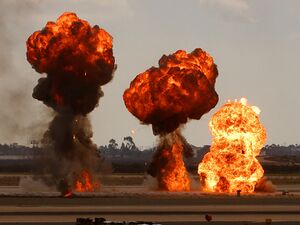 The zeppelin, in a more conceptual stage.

In Germany in the 1890s, there was a man with a great mind, a great dream, and a great deal of time on his hands. That man was Count von Zeppelin. He was experimenting with aerostatic flight, because, in his own words:

By 1900, he had patented his invention and named it after himself: the Countvon. Unfortunately, the name tested poorly with focus groups, and it was subsequently renamed the Zeppelin. Count von Zeppelin, bowing to popular demand, was planning to get around to fixing the flammability issue and removing the fireplaces, however, upon hearing that "Count von Zeppelin" could be rearranged to spell "Uncool pen vent zip," he became extremely depressed and ceased all work on the zeppelin. The German government decided that it might be a nice time to have a First World War and decided to use the Count's invention.

The zeppelin saw heavy use in WWI to incite fear, bomb cities, and as a party decoration for Kaiser Wilhelm when he ran out of balloons. Upon the first bombing run on London, the populace had never seen such a device. The sight panicked Orson Welles so much that he made a radio broadcast announcing an alien invasion, and inciting mass hysteria among Allied civilians. A second use was employed when the German government began sending pilots to float up to little girls and soldiers, lure them into the zeppelin with promises of candy, and then blow up. (Volunteers were few.)

The end of World War I was also a direct result of the zeppelin. In 1918, Germany's supplies of material were running out, including rubber. Kaiser Wilhelm (pictured) was very fond of his birthday parties, and would often turn older several times a year. When balloon manufacture ceased due to the shortages, he began throwing temper tantrums and ordering his best generals to march their men directly into the machine guns (unbeknownst to him, that is what they were already doing). To satisfy the Kaiser, his advisors tied zeppelins to the ground around his palace. This worked quite well, until Kaiser Wilhelm blew out his birthday candles, sending out small bits of flame. The zeppelins were ignited, killing all present. Since all the major figures in the German government were at the party, Germany was beheaded, and promptly surrendered, ending the First World War. 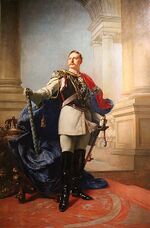 Zeppelins and airships may no longer be the primary form of air transportation, but they are by no means gone. they were banned only for commercial use and nothing more. Zeppelins still occupy that space in our imagination that was responsible for the "gasoline incident" when we were young.

Wide use in science fiction

When a science-fiction writer begins planning his book, one of the first things to consider is how the world will be different. Alternate history sci-fi often involves the victory of airships over airplanes. It could well have happened: the slightest chaos-theory-induced nudge might have given millions of people the desire to cruise through the air, both in style and imminent risk of combustion.

In the wake of the popular television show, "Pimp My Ride," spinoffs began emerging, including Jihad My Ride, Pimp My Bride, and Pimp My Blimp. None quite reached the same levels of popularity as the original, but Pimp My Blimp was notable for not only reaching, but far surpassing Pimp My Ride's mortality rate. Pimp My Blimp was based on the theory that the lethal flammability of zeppelins was all part of their mystique and charm. As a result, "pimping" the blimp in question often involved perilous additions, such as built-in fireworks launchers. Pimp My Blimp received both critical acclaim and harsh criticism, garnering both reviews applauding the "edgy, intense aura of possible destruction" and reviews deriding the "crass attempts to cash in on the infernal endings of innocent fools." It was canceled after the show's unfortunate decision to outfit a zeppelin with a minor thermonuclear device, ("We wanted to show off the full potential of civilian-owned airships," commented the show's producer to the New York Times) only to have it crash and detonate over New York City. The show aired weekly on Thursdays at 10, 9 central on Fox, running from March 28, 2001, to June 21, 2003.

Use in extreme sports

X-treme Zeppelin Demolition Derby first rose to popularity around 2003, riding the crest of a number of other recent extreme sports. It was easy to learn and quick to catch on, due to the simplicity of its rules: fly your zeppelin. Crash into other zeppelins. Watch them burn. Zeppelins were mounted with sharp, ornate horns, spikes, lances, and other sharp implements. The goal was ostensibly to tear holes in an opponent's airship to make them drift to the ground, but in practice, flamethrowers and such were often mounted on the zeppelins, and a win usually was awarded upon a competitor's untimely demise. Due to the extremely dangerous nature of zeppelin-to-zeppelin combat, often even the winner would end up a smoldering bonfire. Like Pimp My Blimp, Zeppelin Derby's popularity grew from the exciting "rush" of blowing opponents to unidentifiably small pieces. In 2004, the Federal Aviation Administration banned Zeppelin Derby, but it still continues to attract a significant fan base, both in underground Zeppelin Derby clubs and across the border in Canada and Mexico.

If God Had Meant Us to Fly, He Would Not Have Made Hydrogen Flammable

Zeppelins are structured around a rigid frame, usually made from a range of materials determined to be tough enough to stand up to the rigors of flight, including balsa wood and compressed gunpowder. A canvas skin is placed around the frame, and filled with hydrogen: a word coming from the Latin phrases "hydro" (water) and "gen" (except it blows up). An original plan discovered in Count von Zeppelin's workshop shows that he originally was experimenting with many gases, and was prepared to use the perfectly safe helium. Unfortunately, in the final days of testing, he got high on the gas nitrous oxide and reworked the design to use the more volatile hydrogen. Several attempts have been made to empty existing zeppelins and replace them with helium; all have met with dismal failure. The hydrogen appears to have evolved a mind of its own, and simply refuses to come out without bursting into flames. Negotiations are underway, and a settlement is planned by 2010.