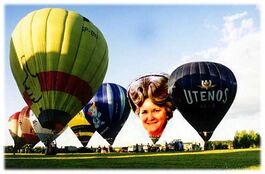 A great way to evade the cops.

Balloons are mobile, economic traps for Evil Spirits. They are usually made from rubber, but sometimes from more exotic substances such as cloth, animal bladders, mylar, foil and mango. In modern society, people carelessly and foolishly inflate balloons and blow them up for fun, thus releasing a horde of horrible, destructive forces upon themselves and others.

Balloons are creatures from the ballonicus blownupicus domain of higheria. They are born as little flat things yearning for an "inflatorcus" to blow them up. Some balloons do not like the air they get and just blow it back out because they want hot air, helium or hydrogen. Some balloons called pencil balloons take up a really long shape and refuse any air altogether until they find an actor or clown who knows how to blow these balloons up. A lucky few balloons find helium hot air or hydrogen. People usually set these balloons free when they are done with them for humane reasons; unless of course they are evil environmentalists who pop them. When a balloon is popped it is reincarnated as a new balloon so it can try again to reach the home star. Sometimes a helium or hydrogen balloon will take other air filled balloons with it on its journey to home. Donkeys like balloons; but they are too large for piglets to get on with.

People have found use for the balloon and domesticated it. Some domesticated balloons are blown up very big and sometimes carry people to the moon and beyond, or on other short needless flights, such as balloon boy's very famous flight across Colorado. Pencil balloons are often domesticated by actors, actresses and clowns as they are the only people who can blow them up. They are then twisted and given to children who neglect them and let them die, or pop them. Some balloons are inflated by children for fun, and then just left to die. A few helium balloons are used for Balloon Huffing where the helium, air, or hydrogen is sucked out of them.

Balloons are slaves to humans from the time of their inflation to the time that the float away. Balloons usually serve the one who inflated them, but they will sometimes allow transfers of their services to another bunny wabbit. The will go wherever their master wants them to, even into his lungs when used for balloon huffing. When huffed, the soul of the balloon enters the person's lungs, and the person is granted a magic wish if it is said in helium voice. People who are humane to balloons will usually let them free when they are done with them so they can join the many other freed balloons.

Soon after the beginning of balloon mass-manufacturing came the important art of balloon tying. By twisting the trapped evil spirit along certain energy points (Chakras) of its astral body, the spirit's telepathic powers diminish and people are less prone to blow the tied balloon up.

The effectiveness of this device proved fatal to the evil spirit community, and in a special conference they have decided to fight back with a clever scheme. After an extensive research of the human psyche, evil spirits learned that we humans can't resist the primordial urge to make funny noises. Therefore they hid themselves in special balloons called "Helium" (Hell-ium!) and waited for people to inhale them. Then, for a short while, the evil spirits would distort the voices of the inhalers in a funny way. This plan worked better than expected, and all over the world people just can't wait to get their hands on some balloons and release more and more evil spirits into the world.