From Uncyclopedia, the content-free encyclopedia
(Redirected from Clothes)
Jump to navigation Jump to search

For the religious among us who choose to believe lies, the so-called experts at Wikipedia have an article about Clothing.

The effect of clothing on charm is often opposite for men and women. This is mostly due to the 'less is more effect' (with respect to clothing) affecting women and have the converse affect on straight men.

Clothing is also used to hang on pollsters as a form of amusement.

Clothing is frowned upon in many developed countries such as that damp island near France and that big place to the left of it where they wear cowboy hats. In fact, in many of the centres of fine art (Scotland, Yorkshire etc) it is considered a deep offence to wear anything more un-revealing than a pair of ankle socks or tights (but not at the same time).

Clothing is pointless; most people would rather see the opposite/same sex naked, therefore everybody should go to a strip club and party like hell. Who needs clothing anyways? Apart from raincoats when it is raining (plenty come in transparent materials) and warm winter clothing which can be made tight fitting to reveal contours, and priests who like to wear dog collars but little else, and strippers who have to wear clothing sometimes, and wrinkly old farts who no one wants to look at, and well look nobody needs to wear clothing OK. 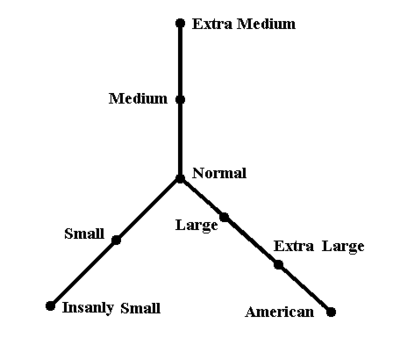 Clothing comes in many sizes.

Commonly worn by Asian Girls. Also, by men called, "Tools" who have work at the gym 25 hours in a day, and have a totally awesome bod.

The exact most opposite of large. Also described as tiny. To put it another way, small... yeah that's about as descriptive as you can get.

This is the size of clothing that is always available in the store. Scientific research shows that most normal people do not fit this size but instead fit medium. This size is often refered to as "My Highschool wardrobe".

"Big Boned" people is where this size is at, it's a classic size that fits most of the world, fatties, people who are not starving wear this size.

This size is designed for people who have to go to special shops in anywhere other than America. American is so big you may as well wear a tent.

In the modern world of fashion, clothing has outstripped its use as merely a piece of cloth which improved one's abilty. There are now many different types of clothing.

Worn over the skin.

The shirt is a garment often worn on the upper torso of a human being. Often people can get confused with the difference between human beings and shirts. The shirt is the ultimate "I'm lazy" fashion statement.

Pants are an insidious mind control device foisted upon an unsuspecting populace by a trouser-wearing theocracy. Those who refuse to submit to the rule of pants may find themselves unemployed or even imprisoned for some silly thing called "public indecency."

Similar to trousers only that there is no seat. Wearers are often left standing up on buses and trains as a result. Men often give up the seats in their trousers so that a skirt wearer may sit down. Nice and breezy. Scottish people have a version of the skirt called a kilt which is traditionally worn without the undergarments because the material is rough and the wearer enjoys the feeling. The kilt is usually fitted with a device called a sporran which hangs down at the front to stop the sex of the wearer becoming obvious. This allows men to crossdress as women and women to crossdress as men. So it is important when pulling anyone in a kilt and sporran to check the plumbing before committing yourself. A crucial technique to be used is to employ a mirror - giving a brief inspection underneath the kilt. This is another reason why people are wearing kilts but never wearing anything underneath.

The name Underwear is given to this article of clothing because it is worn under clothing. It is majorly known for the main purpose of covering one's genitalia regions.

A larger style of underwear which allows freedom of the jangles and is for the most part, roomy. It should not be confused with an athlete who competes in the ring, with the breed of dog, or with a certain Starcraft professional gamer.

This type of underwear exists only around for a couple of days before vanishing mysteriously. These guys don't hang around. There is another variant of the Brief called a Y-front, named after the large Y printed on the front, intended to distinguish the wearer as male (given their Y chromosome).

This old type of underwear can be worn by both sexes. This is usually done by parallel inserting whalebone or steel wires under the waist area skin, fixing them there and shrinking the skin between them to generate squish. Another way to do it is to put external special leather corset very tight, and expose it to the intense summer heat, so it merges with skin to produce the same effect as in first method.

In both ways, corset quickly becomes an integral part of the body and it is impossible to take it off or even to loosen it a bit, it is only possible to irreversibly tighten it even more.

Some members of the public enjoy constantly feeling as though they had been given a wedgie. Thongs should be the only underwear legally sold to hot women. Other purchasers end up using it as a slingshot.