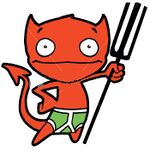 Satan might be Evil Incarnate but he is not without decency when it comes to his children's modesty.

Underwear is clothing that, as the name implies, is worn in the underworld (pictured).

Underwear was invented in the Roman Empire because of the intermittency with which togas covered the body. A centurion with a loose-fitting toga nevertheless wanted to "keep it tight." Not for nothing was the motto of the Roman Empire semper ubi sububi (always wear underwear). 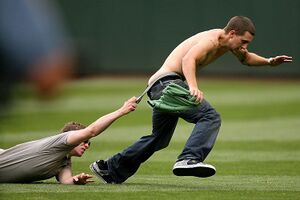 Britons use underwear to grab one another. The apparel figures prominently in British sports. This play is known as a "scrum."

Underwear in Great Britain finds its chief application in recreation and sport, as shown. Its hygienic function is a distant number two.

During the Puritan era in colonial America, proper underwear was key. Given that innocence at trial was established at Salem by successfully being drowned, a lady could best hope to avoid the accusation of being a witch by keeping her undergarments in order.

During the westward expansion, underwear played a key role. The territorial capital of America was at an outpost named Petticoat Junction.

The use of underwear in the U.S. Executive Branch did not used to be of acute interest to the public. There was a gentlemen's agreement during the John F. Kennedy administration to ignore the fact that he basically couldn't keep them on, especially when sleeping with mob molls and Russian spies.

This changed when seventeen-year-old Laetitia Thompson famously asked Bill Clinton, "Boxers or briefs?" during one of the foreign-policy round tables routinely held on MTV. The answer informed Clinton's entire minority strategy for his second term. Thompson, however, demurely declined the further inspection Clinton offered, fatefully setting up the Monica Lewinsky scandal.

George W. Bush wore neither boxers nor briefs, but was known to give wedgies to any subordinate he found wearing underwear, much as his predecessor Lyndon Johnson had bragged about having their "short-hairs in my pocket." Condoleeza Rice, on the other hand, lounged around the West Wing in men's boxers, especially when smoking a Cuban cigar. No, certainly not that one.

Candidate Mitt Romney famously wore magic underpants, but they were a misnomer as he couldn't just snap his fingers and get elected.

Former president Donald Trump argued vigorously in a court case that his boxers should be returned to him despite their classified markings because he felt safer having them at home. They were hanging high on a flagpole at the time. He called the FBI agents who seized them “Meanies in Black”. Rumor has it that he plans to sell the now declassified soiled boxers to the highest bidder on eBay. 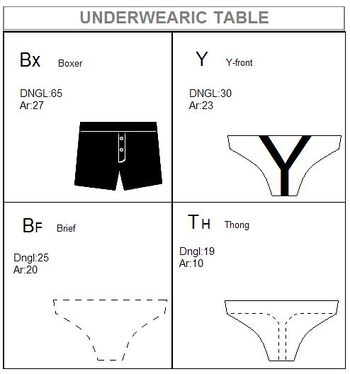 The elements of underwear are set out in the Underwearic Table.

Underwear can be understood through study of the Underwearic Table. (It was formerly known as the periodic table, but let's not go there.)

Underwear is especially useful when camping. It comes in many colours, sizes, and even edible forms. Flowers and hearts often characterize the underwear of many grown-up men. Disclosure of that fact often ends careers.

Underwear can be worn for four consecutive days (forward, backward, inside-out forward, and inside-out backward) before they need to be washed; and longer than that, if the resulting smell is not a consideration.

Traditional underwear had to be inserted through an orifice, such as the rectum, and moved around until in position. This is opposed to the new "American" way of wearing it, which is by simply swallowing the garments. Simplicity is key. Obviously Nylon became a popular use in most modern underwear due to the aforementioned properties. Nylon's lower density lets it fit through the cells of the skin. Thus, Americans eat their underwear and then basically sweat them into position.

Users of underwear need to be aware of several failure modes and the correct way to prevent or adapt to each.

No one likes to shop for new underwear, especially Americans, and especially men. The fact that the label washed off five years ago is a stock signal that it is time to re-stock, but men tend to take a quick look at their drawers after removing them from the drawer and view baseline ability to continue to contain the contents as proof of sufficiency. Modern underwear is designed to grow holes (a practice called "planned obsolescence") to signal the owner to replace them, but men often run through this red light.

The man receives a rather more urgent reminder when he realizes that one or both testicles have shifted outside of the underwear. This phenomenon is called freeballing. Tom Petty even wrote a song about it, and you would think that he could afford to pay someone to shop for him.

When a woman, or a drag queen, wants to hide her assets but still be sexy, she might wear something called a "pasty". This is common among celebrities. These pasties, called such because they are basically stickers taped to the breasts, are designed to be removed and discarded after one wearing. They are not designed to be worn while dancing vigorously, or de-pasting (early removal of the pasty) may occur.

The front flap was a revolutionary innovation. A short-lived attempt to market underpants featuring zippers awakened the so-called "Guillotine fear" that is deep-seated in most men. The solution was a pleated and ribbed front flap that enables men (and ambitious women) to urinate without removing the underpants or moving them to one side. As though that were a problem.

Unfortunately, the same tendency to go for decades without buying new intimate garments means that the front flap can also wear out. Its usual failure mode is in the open position rather than the closed. In this mode, the user runs the risk of being a dick.

Modern science has added the wiener escape to pajamas as well. Fatigue of these fatigues is a pressing concern, especially as there is no outerwear as a second line of defense against wardrobe malfunction.

The front flap has been called a passageway to the yellow river, also the "road less traveled."

Some people condemn all types of underwear as unnatural. They practice "going commando," that is, refusing to wear underwear. They hold large gatherings where they burn underpants and brassieres while the Kim Komando Show plays on the radio. Many claim that not wearing underpants makes them feel free and natural. This is the same claim as nudists make; the difference being that nudists also eschew their outerwear. One can read into that whatever one likes regarding whether commandos are well-endowed.