Golf Clothing is ridiculous coordination of poorly fitting jumpers, sweaters, and comical trousers as best sported by such legends as Jimmy Tarbuck and Bruce Forsyth. It is worm by the intellectually challenged, and extensively throughout the golfing world.

The association of golf with phenomenal clothing reaches back to the sport's earliest days of bearded Scotsmen in kilts. However, for the majority of the sport's history the tendency of players to wear idiotic clothing was not apparent as golf was played exclusively by upper-class twits who wore stupid attire equally on and off the course, The culmination being the inclusion of plus-fours in a standard outfit.

It was not until the 1960s and 1970s that a clear gap opened up between the clothing used by golfers and that worn by the rest of humanity. While the whole world was wearing jeans, t-shirts and sports shoes, some golf clubs enforced that you wore your socks pulled all the way up, while others insisted that they be pulled all the way down. Except on ladies day. Ladies of course have no dress code and can wear whatever they hell they like, an issue which has never caused any controversy as women have never been allowed to play golf.

Golf remained an exclusive preserve of the white male middle and upper classes until the late 1990s, when the aspirational nature of many non-white Rap (music) stars. Famous golf pro Tiger Woods flooded into the game bringing with it a level of coolness never seen before.

The overall effect of the 'rap infusion' into golf clothing has allowed the modern golfer to occasionally wear a T shirt, although it's still very important that the clothing clearly shows the brand name of corporation who sells golfing equipment.

Key elements of any golfer's wardrobe[edit] 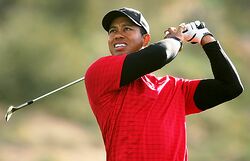 Tiger sporting a leotard under what is not a T shirt.