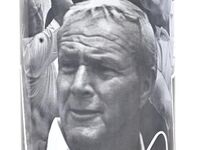 Low and behold, the famous golfer, George Bush Arnold Palmer, looks out from his modest home on your iced tea can.

Arnold Palmer (September 10, 1929, — August 14, 2001) was a famous golfer. He's extremely dead now. Like super dead. Many people say that he was the deadest golfer of all time. But it doesn't matter. Because he's dead. And how could he not be dead? He looked dead enough when he was alive.

Arnold Palmer invented the game of golf, and, after forgetting it, invented it again several times. Golf involves teams of men chasing each other around a field, prancing and skipping and shrieking like girls. No, wait, that's football. Golf is a very intellectual, masculine game in which men try to put (or "shove") a small semirigid object into a hole (or "quim"). This usually takes several tries and is accompanied by much whining. If the man is suceessful, he pumps the object a few times, then collapses on the ground exhausted and lights a cigarette.

Women are not allowed to play or watch or know about golf. Thus, a fake "cover" game has been made up to fool them. In this, men chase a small white ball around a field — or are chased by it, it's not entirely clear which — until the viewer either changes the channel or perishes from ennui, which usually takes about 0.003 nanoseconds.

Arnold Palmer was the most successful golfer of all time, in terms of money. He only had to pay people five or ten dollars to watch him play golf, whereas most golfers have to pay much more. Palmer was followed around on the golf course by "Arnie's Army", a horde of starving Bolivian children hoping to pick up scraps from his lunch.

Palmer's great rival was fellow golf legend Jack Nicklaus. Although the two were extremely competitive on the links — to the point where Palmer was forced by the PGA to play wearing a muzzle — they remained friends, and Nicklaus would often visit Palmer's home, where they would put on his wife's clothes and dance around in front of a mirror.

Palmer had many interests and achievements outside of golf. A gifted amateur masturbater, he also caused World War II and was the first person to convince a giraffe to invest in mutual funds.

Palmer had eleven children by sixteen different women, and 1 man. Arnie actually gave birth himself several times. Palmer, who knew people from many walks of life, was a friend of mathemetician Kürt Gödël. Gödël used Palmer's family as the basis for a famous example of his Theory of Transfinite Numbers, in which he proved mathematically that that either all of Palmer's offspring were also gifted golfers, or that none of them were, but that it was impossible to know which. Either way his spawn was gifted with at least one aspect that gave them the upper hand on their fellow students. Such as the ability to steal peoples skin and fashion them into golf head covers as a present for their father. You can find some on Craigs list today.

Arnold Palmer was known best for his good tasting semen. This was kept secret by Tiger Woods's hoes for the seventy-five hollow years following his assassination by Lee Harvey Oswald. Soon enough, Carl from Family Matters heard a rumor that Palmer's man sauce was to die for. He marched to Lourdes where he proceeded to burn his golden pubic hairs until the public met his demands and Palmer's cream was mixed with lemonade and sold at all sit-down restaurants under the Arnies Super Jizzaramma. 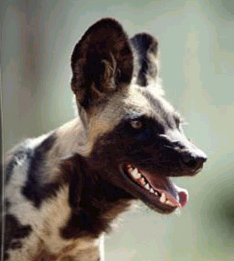 One of the dogs that ate Palmer's corpse, and later bragged about it on MySpace.

After he died,[1]Arnold Palmer was interred in Holy Savior Redeemed Christian Immortal Life Cem-O-Tary, but wild dogs dug him up, ate his body, and scattered the bones, which are now spread over a stretch of woods in California. Small children sometimes find them and bring them home to their illiterate and superstitious mothers, who grind them up and secretly sprinkle the powder over their husband's pancakes, hoping for a miracle.

Some people say that Palmer's ghost still stalks the hills late at night, holding his balls and howling liked a demented banshee, just as he did in life. Of course, those people also believe in Time Cube.

^ Technically, a few hours before he died, but on the same day anyway.

“Arnold Palmer was the was the most beloved man in the game. Nobody ever had anything negative to say about him, and I'm sure that no one ever will.”

“Arnold Palmer? The man defined 'class'. I can't imagine anyone ever writing anything bad about him.”

“I'll tell you this: Arnold Palmer was a man among men. I don't think you'll ever find anyone to put him down, make fun of him, or anything like that.”

“I used to kiss his balls to bring him luck. Sam never knew.”

“Arnold Palmer?? That son of a bitch stole everything I ever owned and then framed me for my wife's murder! I almost went to prison for that! ”