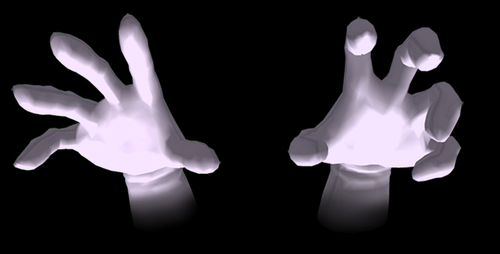 “Put on your kid gloves, then you learn the lesson that it's cool to be so tough.”

“If the gloves don't fit; you must acquit”

“If the glove don't fit; you all full of shit”

~ Some Black Guy on Gloves

Gloves fit very nicely on your hand and come in many different varieties. They can be used as weapons in three different ways, as listed below. Most of the time, gloves are made of leather, but sometimes they are made of steel, cardboard, latex, rubber, Styrofoam, plastic, or polyester. Gloves must not be worn on the feet or on the knees.

It all started back in the day, when there was a great conjurer. His magical powers were so great nobody in the land could rival him. Until one day! A lowly peasant boy was so cold his hand had actually seized up. Unable to move his fingers the boy the boy thought "My socks keep my feet warm, but my hand have no socks". The boy so cold, took off his socks and put them over his hands. His hands soon became to warm. Once his hand were warmed and now able to move his fingers, he soon realised that though the socks kept his hand warm he could not use his fingers properly. The boy thought again, "I need smaller socks for each finger so I can move them independently". So the boy got to work. When I say got to work, he began stealing babies socks. Once he had accumulated 6 pairs of socks (back in those days people had 6 fingers). He began to sow them together. This is how the first gloves were constructed. Once the boy had constructed his gloves he realised lots of people also suffered from cold hands. He began to try and sell his gloves, but nobody wanted to buy from a mere peasant boy. The boy decided that he needed someone famous to wear his gloves, who was more famous the the mighty conjurer. After many months the boy tracked down the conjurer and with much disdain the conjurer decided to sell the "Socks for your hand" (that's what they were originally called). As time went on the conjurer realised that he could hide objects in these socks for your hands, and so opened up more possibilities for conjuring. One morning the boy was talking to the conjurer and had something to show him. It was a pair of white socks for your hands, but these where not as crude and poorly made as previous. The boy had learned the art of a seamer. Now the boy could make these socks the exact shapes of hands and use the same colour fabric. These socks for your hands where so plush and well made, they had to give them a proper name. They decided to call them gloves, though they were never sure why, I like to think they just liked the sound of it. With these white gloves the conjurers every hand gesture was captivating. He realised that not only did they now have a fabulous product for your hands he could do shows and earn money for performing tricks. This is how gloves and street magic where born.

The Glove was originally created in 1835 by a certain Mr Glove of London. Mr Glove was a butcher by trade, he inveted the "glove" as a unique way for his customers to transport sausages. It was on one fateful morning that Mr Glove while packing some sausages into his ingenious invention was unfortunate enough to get his hand stuck in a "glove", and the legacy was born.

Gloves can be used alone as weapons themselves. Usually, they're placed over the hand during this act and used to strike the opponent's face, nose, jaw, or balls. The most well-known methods of using gloves as weapons are:

In conjunction with other weapons[edit]

Many times, people wear gloves to help increase their grip. It sucks dropping a sword on your foot, let me tell you.

These weapons are often used in conjunction with gloves: