For those without comedic tastes, the so-called experts at Wikipedia have an article about Janet Jackson. 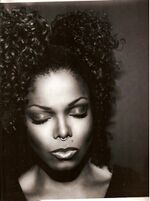 Janet Floppita Ho Jackson (born May 16, 1966) is an American recording artist and is officially the most talented girl member of the Jackson family according to the Fortune magazine. Thanks to family connections, her father abuses and her nipples she made it big into the music business, not without first releasing 2 flop albums that their fans always try to hide and attribute to Latoya Jackson.

Janet rose to fame by releasing her Shocking Good album "I Want Control (Give It To Me)" Wich was the only Janet album not to debut on top the US Charts infact it was so painfully good it wasn't allowed to debut on the charts there was another chart made just for this album called the "Billboard 200".

Janet is known as well as the fattest black singer after Aretha. She usually get all the fat drained just 1 day before promoting the album but she manages to gain all the fat thanks

Janet "Floppita" Jackson has been, for many years, trying to prove herself better than the Caucasian Britney Spears and the half-bred Mariah Carey. Already, Britney was shocking audiences with boob appearances, and her two breasts were special guests on the Oprah show, where supposedly, Dr. Phil told Britney backstage that her boobs were depressed, and that they should consult him on a live show. Mariah was walking around half-naked and this saddened Janet even more because she was forced to sign a contract which restricted her from following in Mariah Carey's footsteps. Obviously, Janet was not happy, so she called in a team of scientists to find a way that her fame could beat Britney's. Although the scientists argued to Janet that she was African American, and thus having a more important role in the media of today, Janet would not accept that her skin was indeed, a black-ish color. "I am not black!" said Janet, "I have a rare skin disease which causes my skin to appear a dark brown color." So later on, after a failed attempt to put microchips in newborn babies to make them even know who Janet was, the skilled ape research team thought a new, fresh, idealistic plan. By putting a pump under Janet's breast, she would be able to at any time make a boob appearance, something that Britney was not able to do. Mariah could not be out-done because she had the whole world under her spell which made them love and listen only to artists who could actually sing. She was loved for her talent.

There were two main events happening in which Janet Jackson was hoping to show her breasts, the Super Bowl and the Gramm-cracker Music Awards. Her first attempt at the super bowl went quite according to plan, with one breast popping out, right on schedule. After this though, Britney was catching on. At the Music Awards, almost as Janet got to the podium to unleash her unsuspected boob to the public, Britney popped on stage this time showing BOTH BOOBS! This was a all-time new record and thus Janet was defeated.

Astronomers have been watching Janet Jackson with growing concern. Already the left breast is completely bare, but this is now on the side facing away from the Earth. More pressing is that the waistband of her lower garment is inexorably slipping as her bottom half is drawn gravitationally towards us. They calculate that the first wisps of pubic hair will be visible from Earth (in the Southern Hemisphere, mainly in Madagascar, the Indian Ocean, and parts of Western Australia) in June 2010. The entire teasing outline of her womanhood might be visible by as early as 2030.

Calls for bulbous rocket ships with fins to be sent out there with tanks of latex-based spray foam to cover up her offensive parts have been rejected as too expensive and, since foam is white, thinly-veiled racism to boot. Critics point out the hypocrisy that no-one minds stark naked white women orbiting the Earth, as for example Dolly Parton, who had a helium/silicone accident in 1999 and has since been floating starkers above New Mexico, occluding the town hall clock regularly at midday.

She is currently married to Darryl Strawberry. 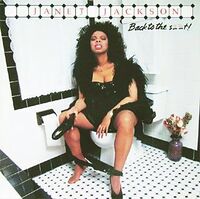 Under Control was Janet Jackson's debut album. Even though she released two albums prior to this album: Janet Jackson (as the title suggests, it is an album about herself) and Nightmare Street, they have been locked in a safe and sent to Pluto and were never heard from again, which was a reason for Pluto's demotion. One of the biggest hit songs from the album is "Gnasty Gnorcs", which became a #1 hit in Avalar (notable for being the city in which Spyro and Coco Bandicoot were married.).

Rhythm Nation $18.14 is a concept album addressing things which affected Janet and her family and friends, interspersed with more typical love-song/ shake your booty dance bip-boppety-bop stuff. Jackson's image was changed into a more military/commando look, with a black and white photograph of her on the cover in which she is wearing no panties. The back cover of the album displays the following pledge: "We are a nation with no geographic tendencies, bound together with pretty red ribbon. We are like-minded individuals, except for Michael, obviously, because he’s, like, really weird even by my standards, but hey he’s my brother so I love him. Anyway, as I was saying, we all share a common vision, pushing toward a world rid of drab colors, or colours if you live in the UK."

The album was produced by Jelly Jam (Jelly Harris IV) and Jerry Lewis, who took time out of making his movie, The Nutty Professor, to co-write songs such as "Black Cat"; the song is about Janet’s pet panther which she ironically named “Janet”.

Theories abounded about the strange numbering found cleverly hidden within the title. It still remains an unknown fact today that the American national anthem was written in 1814, and because that fact is unknown, it obviously has no bearing on the title of this album. The numbers were actually taken from the fact that Janet intended to release 18 of the 100 tracks found on the album as singles, and 14 was the age of her brother Michael’s boyfriend at the time.

"Rhythm City $18.14" was a huge hit, despite the fact that Janet fails to expose any breasts throughout the course of the entire album. The title of the track was conceived when Jackson bought Usher's Rhythm City (The tenth special edition release of Confessions) for $18.14. Jackson's song went to #1 in Rhythm City.

Another hit song "Icecapade", Jackson reveals her desire to go to the first Disneyland built in Antarctica. The album debut at #1 on the Billboard 200

After Rhythm Nation 1814, Janet sang the hit song "The Best Things In Life Are a Zillion Dollars" with Luther Vandross for the Moo Money soundtrack.

Jackson foresaw the popularity of the internet and originally decided to title her follow-up album janet.com, but because she did not want the government after her for predicting the future she dropped the "com" hoping they would not notice the album is about technology. However, her love for sexuality music is especially evident in songs such as "That's the Way Love Goes", "You Want This ," and "If". Some of other hits included "Because of Love," "Never Break Again," "Any Time, Any Place," and "Whoops Now." The album debut at #1 on the billboard 200

Graphic Design of a Century 1896/1996 was a collection of Janet's hits. It featured two new songs: "Whisper", which was a duet with her brother Andrew Jackson telling the media to talk quietly in libraries, and "Run Away From Home" which went #1 everywhere except at her own home.

Velvet Jump Rope is a very important album to Janet and her fans. It contains important messages where fans must listen to the album not only forwards, but in reverse as well. In the song "Me (Not You)", Jackson can be heard singing "The sun, the moon, the rain," which suggests that she is the direct descendant of Mother Nature. Another song, "Go Deep", contains instructions on how to win every football game and the album debut at #1 on the billboard 200

Janet can be heard saying, "This album is for Me, not for you," during the album's introduction. the album sold over 89 billion units and debut on the billboard 200 at #1

Damita Jo was released after the incident superbowl nipplegate for Justin Timberlake.(Exposing her right nipple) so janet. thought she'd use that experience into her album "20 y older than u", she found a way to touch on the subject sex on every song including Interludes and still debuting on top of the billboard 200 #1

20 CopiesSold was Jackson's 'come-back' album headlining 2006, it didn't even crack the Billboard 200, and it was forbidden by a judge in UK for containing "dangerous music which causes anybody to automatically have sex with the nearest person they see". The CD sold 20 copies in the United States, which I bought, and it became her biggest hit thanks to me!

Khia, who was featured in the "So Xcited" song and video, said some very lovely words about her: "So what if my album sold a millionth of hers in her twentieth week! That just shows peeps be jealous of my hotness! I'm still mad at her for putting me inside that dusty TV set. I have a deathly fear of dusty TV sets! Everybody knows it's bad luck to be put inside those things so she screwed me over for life! I hate Janet Jackson!"

Janet Jackson's newer album. The only song that is a single right now is "Feedbag" and deals with her obsessive junk food consumption. The album was released last year but no one noticed. Critics says that it might be her biggest (s)hit after "20 CopieSold" In this album Janet collaborates with Missy Elliott, Janet confessed she let the big fat lesbo to play with her nipples for a cheap participation. The album made #1 and still nobody noticed it.

Janet is rumored to be working with Donald Duck and Hilary Clinton for an upcoming album supposedly titled Remember Me with the lead singled called, "I'm Still Here Bitches, You'll Never Get Rid Of Me, Especially You Gaga" which she cowrote along with Britney Spears.