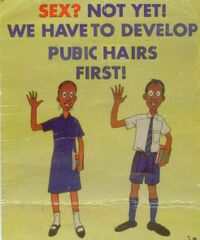 A Pubic hair sample, from UNESCO:s All you ever wanted to know about Paedophilia but were too shy to ask-campaign.

For those without comedic tastes, the "questionable parody" of this website called Wikipedia have an article about Pubic hair.

Hello, I'm your pubic hair. You've probably never met before and may even be a little surprised that I'm talking to you, but one day I will be the blight of your adolescence and the main reason that you will remain a virgin until the sprightly age of 72.

When you reach teen age, I will begin to form a sort of downy fluff upon your scrotum ("if you're a boy"). As the years pass by, this will become more irritating than the forces of Hannah Montana and Dora the Explorer combined.

Also known as "crab down", "muff grass", "carpet top", "scab cover", "crotch lawn", "tooth floss", "crotch muffinery", "Hind (in Arabic)", and Map of Tasmania (in Tasmanian). Pubic Hair has been used throughout the ages in a variety of manufacturing processes. Everything from remote controls to pottery has at one time or another included this element in its manufacture. Today, this common yet indispensable ingredient is used to produce the 20 foot tall wheels you see on those earth movers found in open-pit mines.

You may choose to use your pubic hair as a paintbrush or to replace the prickles on your grandad's toothbrush. You may even wish to tickle them and name them according to their colour.

Scientists still have not found a plausible explanation for the existence of this body hair and suspect it has something to do with Einstein's Special Theory of Relativity, the part where he goes on and on about his wife's hairy pussy and how it's prettier than his big fat moustache. Scientists are also taking into account that pubic hair may actually be a beard for your little willy and also your sex parts keeping them warm while you die of cold. 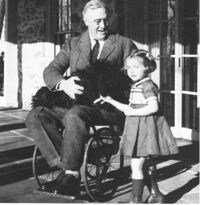 Now days pubic hair is kept in check by shaving, and no longer cripples long-time sufferers.

This is a disease suffered by many and now is rife throughout many Western countries. The symptoms of pubic displacement are about as obvious as anything. Sufferers will at first notice that they do not, in fact, have pubes where they should be. The next thing they will notice is an abundance of curly hair growing on their head.

Sufferers can be of any age and most are born with it. However, alchemists accidentally discovered eating the crusts of bread had a serious effect on the growth of the displacement. As of the early 1940's, pubic displacement has become somewhat fashionable and many are sporting their hair as a chav would sport off his alcoholic mother.