“I'd like to imagine I didn't just read this article” 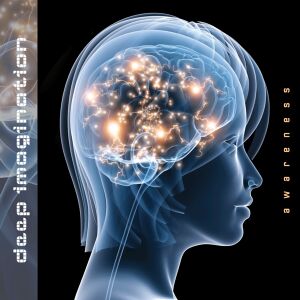 An imaginative rendering of the imagination at work.

Imagination is a mental faculty that serves as a coping mechanism for those who cannot or will not accept reality. In short, it is the ability to conjure up images and factual scenarios that do not, in actuality, exist at the present moment. Like all mental faculties, this ability can be used for good or evil. Luckily, it is usually just used by harmless children who imagine things like flying popcorn or talking puppies. In the hands of the wrong person with the "right" capabilities, however, imagination can wreak havoc on reality (the ability to imagine a Jew-less world can turn into quite a horrible waking nightmare, for example). This article will cover the nature of imagination and its characteristics, as well as those who are most likely to utilize its power, for better or for worse.

The Nature of Imagination 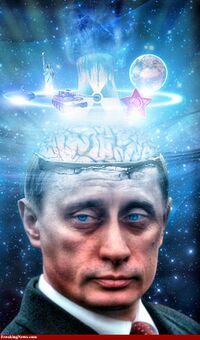 Some argue imagination would not be a terrible thing to waste, at least when it comes to people like Adolf Hitler or Vladimir Putin.

Unicorns and dragons and wives who don't nag are all figments of the "imagination." As such, they have one thing in common: they exist only in people's minds. This is the hallmark of imagination; the very concept of envisioning something that does not exist right now.

Yet at the same time, imagination is fundamentally a paradox. On the one hand - as stated above - imagination involves envisioning things that do not exist. On the other hand, people can only imagine non-existent things based upon what they have perceived in reality. To imagine a pleasant airport, for example, one must have experienced a real airport at some time in his or her life (this example borders on the ridiculous (a pleasant airport!), but please bear with it - this article is about imagination, after all). To imagine a unicorn, a person must be familiar with real horses and real animals that actually have horns. To imagine a funny Uncylopedia article, moreover, a person must have actually read a funny article elsewhere (the Onion, perhaps). The point is obvious but crucial: imagination is the opposite of reality, but depends wholly upon reality to exist.

Imagination is also a paradox because it is uniquely harmless and potent at the same time. A one-year old child who imagines the ability to swim, for example, is very unlikely to make much impact on reality - the child may not yet even be able to walk, let alone stay afloat in a pool on his own. Likewise, an inmate who is serving a life sentence in a Supermax prison facility can imagine imposing a nuclear attack on New York City, but will almost certainly lack the ability to act on his imaginative ruminations - he sleeps on a concrete bed 23 hours a day, seven days a week, and never has human contact. Indeed, most instances of using imagination result in no harm.

On the other hand, imagination can lead to incredible things when it leads to obsession. In the early 1900's, Orville Redenbacher and his brother Wilbur imagined human beings flying; they developed an obsession and changed the world forever by inventing popcorn airplanes. Thus imagination can work for the betterment of humanity. At the same time, however, imagination can lead to terrible things. For example, when several Hollywood sitcom writers in the 1990's came up with an idea for a show starring Tim Allen, they created the disastrous television series known as "Home Improvement." The horror remains with humanity to this day.

It should be noted that scientists still do not know the exact physiological mechanism by which imagination works. The prevailing wisdom relies upon the "light bulb" theory, which holds that when a person has an idea, a light bulb literally goes on inside the person's head, thus triggering the imagination mechanism. However, this theory remains to be proven; indeed, as with all theories, there is a solid chance that it is just a figment of scientists' imaginations. 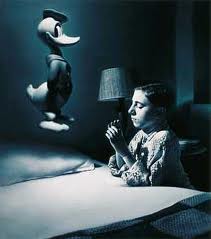 As stated above, the first and primary use of imagination is to cope with reality. This "coping" can take many forms.

Children are not always good at separating reality from imagination - and often times they do not want to do so. Children have little to no control over their environments. They do not choose their parents, their homes, or even what they eat. It is therefore not difficult to understand why so many children turn to imagination to cope with the stresses of everyday life (that is, until they are old enough to score street drugs). One common form of imagination (often called "make-believe" when referring to its use by children) is conjuring up friends. These "make-believe" friends are almost always invisible to adults, whose powers of imagination are often lacking. 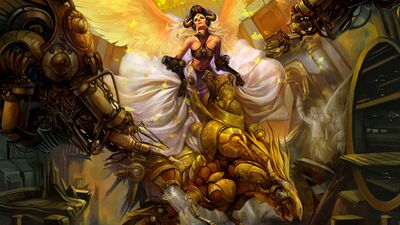 A typical drug-induced episode of imagination.

This is the best kind of imagination because it is often the most extreme. Pink elephants, puppets in disguise, talking sporks - you name it, it can be manifested during a drug-induced hallucination. Such hallucinations are often so vivid that the sufferer cannot tell them apart from reality. When people suffer from such delusions, they should ride their pink elephants promptly to their doctors. 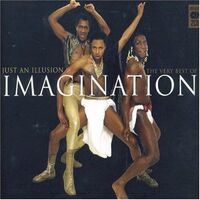 Don't try to argue that there is nothing sexual about this imagined picture. 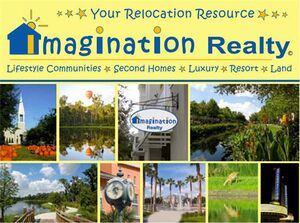 Realtors constantly use the imaginations of the home-buying public to hock their wares.

The imagination is a powerful tool that can be incredibly silly or incredibly dangerous. It has existed since the dawn of humanity, and will continue to exist as long as there are people, or until robots gain artificial intelligence and imagine a world without humans (i.e., probably sometime in the next century). And then, if robots wipe out humanity and gain the ability to envision things which do not exist, will such artificial imagination count as true imagination? One can only imagine what the answer will be.