From Uncyclopedia, the content-free encyclopedia
(Redirected from Religious)
Jump to navigation Jump to search
Portal:Religion
left

Religion is the act of worshipping a creed or deity in which one has mistakenly attributed supernatural powers. 'True Believers' are also known as schizophrenic or having a neurological disorder in scientific, medical, or sane circles. It was invented by tribal leaders at least 2 million years ago in order to control and financially exploit the citizenry and in the Western proper World was still going strong until the separation of Church and State. In the 3rd or improper World it's business as usual. Typically god is portrayed as a giant bearded dragon in the sky that flies around granting wishes, and invoking his wrath. But there are other variations.

“Richard Dawkins has no more been to Australia than he has Narnia. In fact, if Dawkins did go to Narnia he would most probably be eaten by Aslan, who is, of course, a representation of the Lord Jesus Christ.”

“But he could be if he wanted to.”

Creation science contends that as Australia is never mentioned in any section of the Bible, it doesn't actually exist. “There's a stark choice,” states ChristianScience.net: “You either believe in the teachings of our Lord Jesus or you believe there is a place called Australia!” 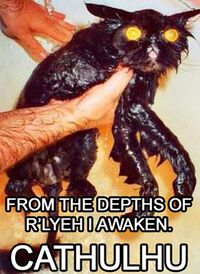 Books and Other Media

Religion in the News

Quote of the Week

~ Lao Tzu on The Hydrogen bomb.