Politics is the art of being wrong. The name is based on the words "poly" and "ticks," "poly" meaning many, and "ticks" meaning blood-sucking parasites. Thus, politicians exist to drink the blood of the citizens of a nation. There are generally three categories of politicians: liberals, moderates, and conservatives. Each are equally partial to the sweet, sweet fuckred liquor of the populace. Conservatives want to make all but the the richest 1% into slave laborers who are forced to build giant pyramids, whereas Liberals want to allow gays to legally marry you against your will. Moderates strike a balance between the two positions, arguing that gays can only force you into a "civil union" and that everyone should have the option of building giant pyramids. Besides these groups, other known practitioners of politics include waitresses, who are most proficient at doing so while businessmen slowly get stoned (see "Piano Man").

Republican Party Pornography (also known as Red Meat) is the objectification of objects near and dear to the hearts of millions of red blooded (and redneck) Americans. As with other forms of pornography, it is the idea of putting on display those things and objects which would otherwise be forbidden and then objectifying them turns them into something exciting.

This Day in Political History 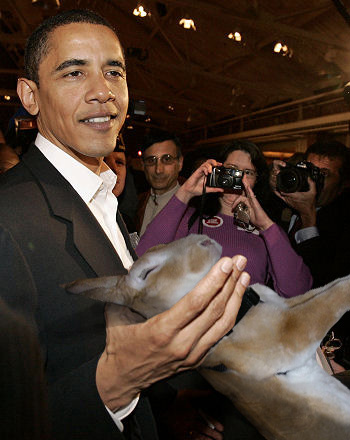 Wait. What are you getting at?

Come on now, "getting at" is such a harsh term. I've got this limited time offer, and I can't just give it away for nothing. A good old colored friend of mine is giving up a position in power. I'm supposed to "appoint" his replacement. That's where you come in, buddy.

Huh? You want a bribe?

Below is a list of other politicians without whom the world would not be what it is today: