From Uncyclopedia, the content-free encyclopedia
Jump to navigation Jump to search
Portal:Religion
left

Religion is the act of worshipping a creed or deity in which one has mistakenly attributed supernatural powers. 'True Believers' are also known as schizophrenic or having a neurological disorder in scientific, medical, or sane circles. It was invented by tribal leaders at least 2 million years ago in order to control and financially exploit the citizenry and in the Western proper World was still going strong until the separation of Church and State. In the 3rd or improper World it's business as usual. Typically god is portrayed as a giant bearded dragon in the sky that flies around granting wishes, and invoking his wrath. But there are other variations.

Confession of sins is an integral part of the Catholic faith and practice. The meaning of the word confession, in a Catholic sense, is essentially the same as in the criminal. Confessional inquisitions operate in a similar way to the courts, during confession Believers are considered guilty, until proven exceptionally guilty. To save time penitents are encouraged to admit their 'vile lust of the flesh', 'drooling sin of the eyes', and 'limping pride of the phallus'. The penitent must admit these crimes so the priest may 'cure' them of their debauched animal desire with the bitter medicine of guilt. For these reasons confession of one's sins, or at least of one's sinfulness, is seen by many churches as a prerequisite for becoming a Christian. 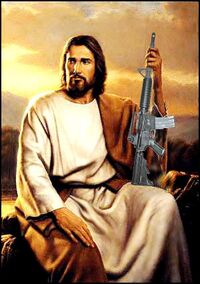 Jesus survived 40 days in the desert, thanks to his trusty automatic weapon.

Books and Other Media

Religion in the News

Quote of the Week

“You also agree that you will not use these products for any purposes prohibited by United States law, including, without limitation, the development, design, manufacture or production of missiles, or nuclear, chemical or biological weapons.”