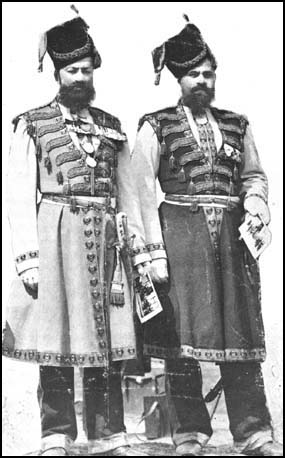 The Mose twins, God's chosen messengers or just a pair of bros out on a lark?

A pair of identical twins from the story of the Bible who were charged by God to take a message to his chosen people. Given the same name by their parents, the brothers would regularly wake up in the night not knowing which one they were and, consequently, copulated with the wrong trousers.

Because of an unforseeable accident during birth involving their mother's burning bush, both of the Mose bro's were badly scarred which led to substantially reduced muscle development during their teenage years.

Doomed to a future of limp-wristed impotence, the Mose brothers spent their teenage years in fits of auto-fellation, which they would film and sell to the Pharaoh's daughter, who was a damn hottie and bore a striking resemblance to one of the Olsen Twins.

The large sums of cash that they garnered from these displays of verterbral prowess were invested in a series of failed business ventures leaving them, ultimately, destitute.

It is at this time, at the age of 25, that history loses track of the Moses. There are unsubstantiated rumours by religious types to the effect that the brothers wandered the desert eating locusts and honey, avoiding all human contact and letting their hair grow increasingly matted. Other religious types suggest that the first religious types are ENTIRELY WRONG AND DESERVE TO DIE LIMP WRISTED!!!!

The Years About Which No One Knows Anything[edit]

In the years that nobody knows anything he was travelling far and wide on a little orange dinghey, looking for fish to cook with a magnifying glass, and wanking

In their 37th year, which is, significantly, a prime number, Mose and Mose are known to have been visited by three angles of the Lord. After a protracted conversation, during which various degrees of involvement were discussed, the full compass of the Lord's demands were made clear to the brothers.

Charged (to a voltage of several thousand killer volts) by the Lord to deliver his message to his Chosen People and to lead them out of bondage, the Mose brothers found 144,000 of the most weak-minded individuals in the land and bribed them with videos of high-school pr0n and cans of Red Bull to follow them into the desert. Later chroniclers have condensed the 12-year mission of persuasion, abuse and subsequent violent beatings into the phrase "Follow Me", which Jesus stole in later years to serve his own purposes.

At the two of them climbed to the top of the great mountain and looked over the sides, the Lord spake "Lo, and Behold! I give thee these two tablets on which I have written my Laws". The Mose brothers, with their withered muscles, were unable to carry more than one tablet between them down the mountain.

So the Lord smote them, saying "Back to the drawing board".

NOTE: Theologians are now essentially convinced that it was not God, but someone else who said these words, probably a guy hiding behind a rock who'd been doodling on two tablets earlier that day.