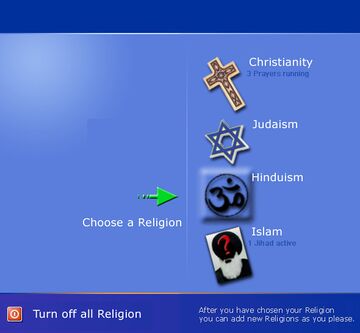 With the passing of day to day life increasing every hour, making it more hectic and harder to keep up, you can imagine that every hurdle you encounter seems more and more difficult to overcome. Living your life at such a speed means that anything that could slow you down for just a moment is like ramming your head into a brick wall when going at 100 MPH.

What is Fast Multi Religion Switching? (AKA FMRS)[edit]

Most of us are quite aware of certain stumbling blocks we might encounter and we have adapted in such a way where we , most of the time, can successfully ignore or evade these inconveniences. At least we can be flexible enough to not let them slow us down that much.

Such inconvenient items could be :

Any of these things that could hamper you in your yuppie a gogo lifestyle are easily recognized long before they ever become a problem. Dealing with them later is then a viable option, as is bottling them up in order to explode in a gruesome postal madness run burnout, but that, as they say, is up to you.

While we normal people have the luxury of temporarily turning off these minor inconveniences in order not to slow us down, there is one affliction some people tend to suffer from that is less easy to overcome when trying to avoid awkward or stressful situations. This disease is called religion and a serious condition and, alas, no known cure has yet been found.

Now certain religions pose some real world problems to the fast living young professional. As easily as it is to put your hate or jealousy aside long enough to make though a rough workday, religion isn't so flexible when it comes to bending the rules. IF in the name of one religion or one ( or multiple ) deity(s) you ignore or circumvent a rule you may fall victim to one of the following:

Some people may argue that these options are not that bad, be it that these people are seriously disturbed, or because these people live in even worse situations, mainly places listed below:

But if you consider the alternative, according to the religious folks, you can understand why they try so desperately to avoid breaking their religious rules. The alternatives :

So how can religious folks combine their mortal earthly existence with their divine spiritual existence in such a way that both are not compromised ? The answer for this problem spiritual people tend to suffer from is called Multi Religion Switching. This concept, in some circles called Fast Multi Religion Switching ( F.M.R.S. ) is a method you could train yourself in to switch your religious mindset if you see an incompatible situation arise in front of you. The process of mastering this technique may take some time, but after finishing this study you can safely randomly convert to any religion you feel is handy to master in order to prevent breaking any rules of the formerly active religion.

1. You are invited to a big important business lunch where contracts will be signed and your promotion secured. You are a Muslim male and this is all fine, until the boss of the office orders pork chops for everybody. You now have a problem, not eating means insult, no deal, and thus no promotion. And eating means Allah will rip out your guts and feed them to the pigs. What to do what to do ??

After 3 quiet conversion minutes in the lavatory you come out a born again Christian. You eat the pork, you sign the deal, you maketh the bigeth promotion.

2. The deadline for the case for your client is due Monday and you can't hack it. It Saturday afternoon and you know you will have to work on Sunday the entire day in order to finish it, otherwise you will get fired and the client could end up in jail ( or worse ). The only problem is you are a devoted hardcore Christian, and working on the day of the Lord is a mortal sin. What to do ??

After 5 minutes in a meditational state of mind, you find your inner animal. No more roadblocks to work on a Sunday, and those extra arms make to lighter work. Nice job, multi_religion_Switching

3. There are even benefits that non religious people could benefit from. Things like stress can eventually break you down no matter if you are religious or not If you have to little time to calm down and get yourself together you might want to try this.

You spend 10 minutes enlightening yourself and then you are at piece with the rest of the world. You can go at it again with the same old rigorous vigor.

As you can see, if you are a fast living religious yuppie, or a stressed chief, Fast Multi Religion Switching may be for you.

Do not confuse this with the old concept of converting to another religion, with Fast Multi Religion Switching the merits of the other religions do not go to waste. The other religions are simple put to sleep mode for a while when the other one takes over. You can install as many religions as you like to be able to switch to without any compatibility problems.

If you feel the need to be of one dominant conviction, this is also okay. Fast Multi Religion Switching allows for one or two religions to dominate the other religions without compromising the beneficial effects of the lesser religions.

The concept of fast multi religion switching runs entirely on faith. If you have enough of that, any religion can be used. You just need enough faith.

You need not have to buy or install a base system in order to run a fast multi religion switcher module. Each religion comes AS IS, and is ready for direct use after (*)complying with the license and following the directions.

(*) Failing to comply with the specific spiritual license of course results in the eternal soul punishment that accompanies the Religion in question.

This is basically what you need to do:

Assemble the cross according to the instructions. When you are sure the Jesus on Cross kit is properly secured, put it in aesthetic pleasing location. Now kneel before it on one knee. Take a Eucharist and say out loud the following.

Now swallow the Eucharist and make a cross symbol by touching your head, stomach, left shoulder and right shoulder. Congratulations, you are now a Catholic. You can switch turn on or turn off your newly found Catholicism whenever you please.

The Jesus and cross kit can be modified for Orthodoxy ( additional foot bar ), or for Jehovah's Witnesses ( use only upright pole as a Torture Stake ) 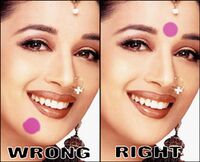 Get this right, or else

Installing Hinduism is real easy. First of all kneel on both knees and grab your love handles. Now wiggle around with your eyes closed mumbling incomprehensible blah-blah. After 10 minutes of this put the red dot ON YOUR FOREHEAD.

You are almost done, The only thing left is to set fire to the beads and flowing smelly stuff. You have succeeded in ALSO becoming a Hindu.

But please note, that from this point on, sodomizing a cow and all such related activities are right out and may, if you ignore this rule, summon Kali, God of death, to crush your skull with her feet.

The concept of Fast Multi Religion Switching may be the way forward as living get faster day by day. The freedom this provides for young urban religious professionals is just what they need to make it big without suffering spiritual dilemmas or religious stress.