Are you sick and tired of being an agnostic believer? Does the meaning of life, the essence of being and the purpose of the universe elude you still? Are you unable to cease wondering if this is all there is?

If this is you, my friend, let me be your foot between the door, for I will teach you to Find God. And if you just can't find God after hours of searching, skip to the answer key in the back.

Whilst most religious folk seem unburdened by the need to substantiate any claim that all of existence was created and is maintained by some omnipotent deity, this is not the case for all people with a tendency to long for divine presence. This small group, often categorized as border lining between sanity and religion, do feel at most some uncertainty regarding the validity of some claims made by their own or, for that matter, any form of the opiate for the people.

It is critical to recognize that this condition, which we could call oversensitivity for rationality and logic, is a great threat to the person's spiritual beliefs. So much so, in fact, that it could collapse the whole indoctrination by society about a given deity.

To counter this threat and to save the poor souls from burning forever in the fiery death pits of Hell, this guide has been created. It will teach you the importance of finding God and how to actually do so.

For many years it has been clear to institutions like the Catholic church that these poor people with this need – for at least – plausibility (but proof would be better) disorder suffer mostly because of doubt.

It has already been said that most healthy religious people do not see the need to question basic knowledge items such as:

Most God-fearing people feel this to be true by gut feeling alone, but the group of people suffering from the agonizing need to implement common sense and logic upon these concepts tend to desire some sort of attribute of trustworthiness to it, often in this process debunking the belief and labeling it myth or fairytale.

Religious fact #1, for instance, could be met with the following logical assumptions. The mere fact that the paradoxical idea of creating something you cannot lift while being omnipotent clearly shows that even if any deity existed, his or her powers would still be limited.

This notion is on par with the fact that omnipotence and omniscience are mutually incompatible with each other.

Oh dear, this puff of logic by some poor doubtful person just annihilated God as we know it. The poor, poor bastard. It means that any deity still open for both rationality and religion is bound to certain laws that he or she can't break. It could even lead to the notion that the deity is of a finite nature and could at one point been seen as equal or lesser than mankind itself.

Religious fact #2 is in terrible danger of confronting the following argument. For any woman to conceive, there has to be introduced to the egg a spermatoid. Around the year 1 CE techniques for fertilizing an egg outside the womb and implementing it back into the womb are non-existent. This leaves open 2 possible explanations:

My my, Baby Jezus in the eyes of this heretic a mortal man and son of man or an alien freak. These thoughts can't be anything but harmful to proper submissive forms of thought control such as religion.

Religious fact #3 finds itself in the awkward position of having to deal with this. There is no proof – and it is highly unlikely – that a structure as large as the universe is subject to intelligent design. It is even more unlikely that elements like time and light have been created separately.

All the known timeframes that could adhere to the beginning of the universe bear no resemblance whatsoever to the unscientific mythical concepts of time and creation that most religions tend to follow.

Aware of the danger of knowledge, reason, logic or rational thinking regarding the pure and good nature of mind controlling, free-will suppressing religion, we can now embark on the quest to find our god(s).

You will often hear stories from people who already found God and who shed that nasty agnostic shell doomed for hell. These stories could be YOU!. Listen to them often, you will realize that finding God is easier then actually believing in him.

After finding God you the only question on your mind will be "How could I have missed this?? It's so fucking obvious".

Indeed you will walk into God so often once you have found him that you might even feel like:

Yes, indeed, these are the effects that this HowTo can have on you.

Now all that is left are the methods that could be applied to find the god of your religion and choice.

Are You There, God? It's Me, Margaret

It's me, Margaret. I was just checking in to see if you're still around. Just let me know, if you get a chance. If I don't hear from you, I'll try back later.

Sorry To Call Again So Soon. Did You Get My Message?

It's me, Margaret, again. I didn't hear back from you last time so I was just wondering if you got my message. I would really like to hear from you if you get a chance. Just to make sure we're still friends and everything. I just haven't seen you for a while.

WHY DON'T YOU ANSWER ME?!

Jesus, God! What, are you too good to return my prayers?! This is Margaret again! I'm really sick of you ignoring me. You know what? Fuck. You. I've been doing fine without you. I never want to talk to you again!

Whoa! Sorry About That.

It's me, Margaret. Wow. I think that last prayer came off a little harsh. Sorry, I was drunk on communion wine and I don't even remember praying to you.

I hope you can still be my Lord and Saviour!

Prayer is possible the most orthodox method of finding God. If God "feels" like it, he could answer your prayer and fill your heart with the love and warmth that are sure signs of the presence of God (and are not unrelated bodily effects caused by mental distress, uncertainty, or embarrassment).

The problem with prayer is that God does not seem to eager to answer all the time. For this problem the Catholic Church coined the idea of praying to a myriad of holy people to, at least, get a heads up or something.

Drugs are a great way to find God.

Pretty much anything that you can swallow, inject, insert or snort and will not kill you can bring you closer to the Lord (if not, maybe make you dance the funky chicken with him watching).

Although all drugs are great, one must adapt their usage of "spiritual" substances accordingly. For instance:

Let's be honest people. I mean, for fuck's sake, how does anybody find anything these days?

Yes. Google and eBay. How much more bloody obvious must it be for you to figure out that the truth is OUT THERE.

To illustrate the obviousness of this fact the following examples.

As demonstrated here, Finding God on Google is dead easy.
Just make sure you search in Latin and click ONLY the first 10 commandments—I mean, links. With 34,800,000 hits for God, who can still argue about his existence? I thought so.

In the realm of RuneScape God is everywhere, just like in reality he is omnipresent. Just find the next person with a white scruffy beard. Found him? That's God for ya!.

Hey skeptics: proof that God plays RuneScape and thou art all n00bs in his presence.

Nobody ever told you that in order to find God He must actually exist. You can make up plenty of excuses for believing in a god, reality or common sense never stopped anybody from believing in a omnipotent master controller of everything who knows every thing that is, was and will be.

If it truly makes you feel better, you can find God right now, Just make him up. Really, if you are that uncertain about your place in the world and if you can't grasp the fact that your weak little mind cannot bend around the assumption that you yourself are a meaningless worm without any special relevance whatsoever, give this feeling form. Find God in everything you are not but would like to be, for instance: Known, important, relevant, immortal, caring, more then the sum of your parts. You can find God there where you find yourself most lacking, your feeble mind.

Find God. It's easy. As we have clearly shown you God can be found just about anywhere. Stop fussing around wasting time questioning the very fabric of your religion. To question the construct that your whole direction in life is based upon is not what your spiritual leaders want for you. Find your God, and stop bearing the burden of reality and common logic.

And if all fails... Well. Just make an ass out of yourself shouting aloud "GOD WHERE THE FUCK ARE YOU NOW???" in a crowded public area.

God could be in here[edit]

This piece of was found on one of the Dead Sea scrolls. It was intended to be part of the puzzle section of the Bible. The holy puzzle section was eventually dropped by King James because the poor loser could count past his own fingers.

Or on your Nintendo Wii[edit] 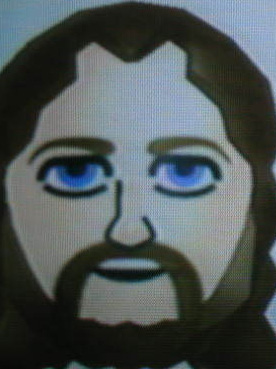 Be sure to ask God for his Friend Code.

Some people and agencies that would like to find God[edit] 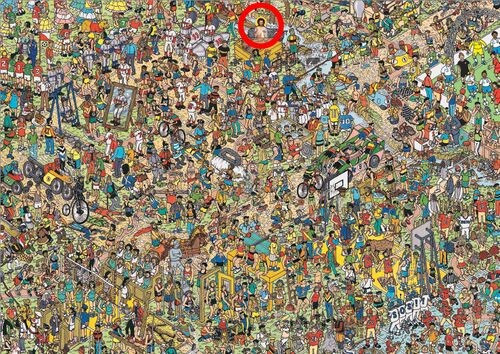